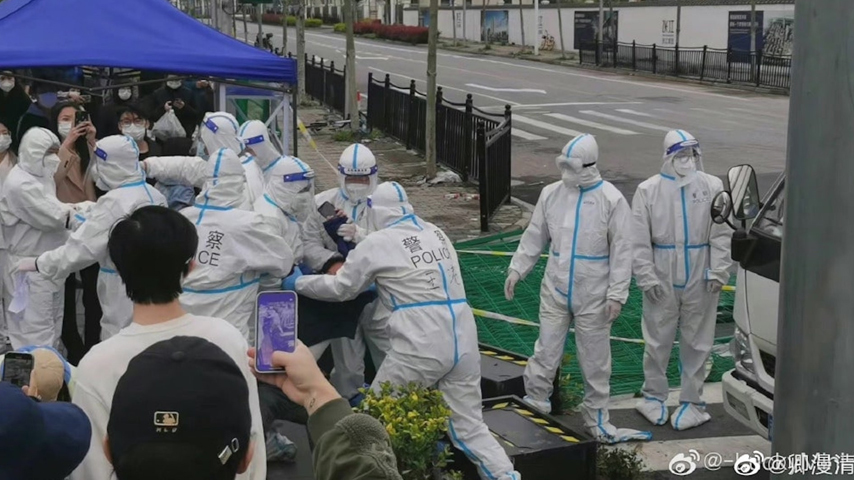 Police in hazmat suits try to quell a protest in Shanghai. Image via What’s on Weibo.

In today’s episode of The John-Henry Westen Show, I spoke with author and China expert Steven Mosher on the horrific scenes in a locked-down Shanghai, one of the most populous cities in the world.

He shared with me details of the horrific scenes of screams, cries, drones, hazmat-suited police, and COVID quarantine camps.

“The people standing on the balconies and screaming in the middle of the night aren’t just engaging in a kind of primal scream, screaming under the darkness, meaningless sounds,” Mosher said. “You can actually hear them saying, ‘We’re dying! We haven’t eaten in a long time! We need food, please help us!’ It’s heart-rending.”

What’s more, the Chinese Communist Party owns practically every building, so they can eject and have ejected people from their apartments because officials deemed them to be a “nice quarantine center,” rendering these unfortunate residents effectively homeless.

But what exactly is the purpose of these lockdowns? Are the Chinese still deathly terrified of COVID while everyone else begins to wise up about it? Or is this a calculated move to keep the population in check and to flex the muscles of the Communist regime?

Find out what Mosher thinks by listening to today’s episode below:

The Most Disgusting Country In All Of Europe