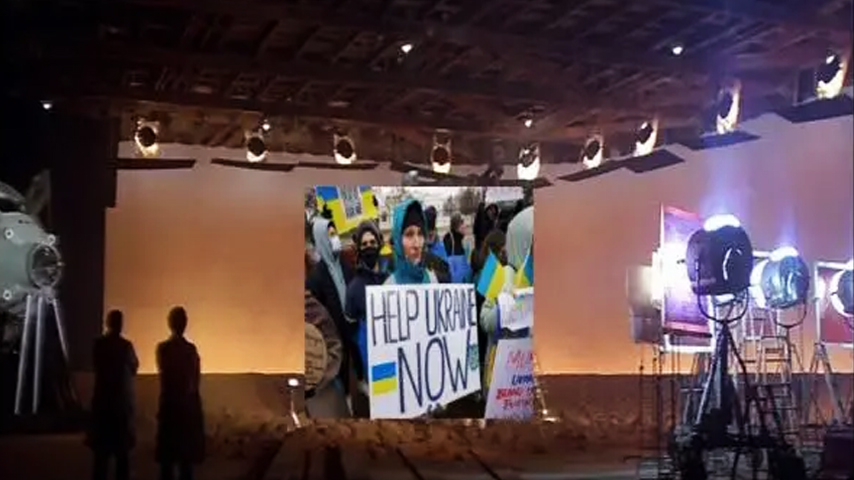 Have you ever pondered why no individual clips of chaos and mayhem are coming from Ukrainians as reported by MSM?

Earlier this month wanting to document the truth about Ukraine, Lez LuTHOR, a self-described illusion warfare correspondent, took it upon himself to make the trip.  And as any good war correspondent would, he has been posting regular reports, a diary of his trip to Ukraine, on Twitter to keep folks at home updated.

This is citizen journalism at its best.

Lez left the UK for Ukraine on 3 March. He explained in a tweet his videos are purposefully 24 or sometimes 48 hours behind because “I’m getting death threats and was walking around a city under martial law.”

At the time of writing, he was still posting updates from Ukraine.  He tweeted: “I was meant to leave today 11/3, but I’m still around, if I can crowdsource funding I’ll stay.”

Keep up to date with Lez’s journey HERE.

Another source, although we are unable to vouch for their authenticity, is live traffic camera feeds from Ukraine – Kyiv, Kiev, Kijów, Lviv border – as embedded below and HERE.

Danny Boy Limerick has backed up this thread with its videos HERE.  So, below we will simply include the text of individual tweets and an image representing the accompanying video as a placeholder.  Then we pick up Lez’s subsequent tweets.

Join me as I LARP my way onto the Hollywood movie set we know as Ukraine.

Will the matrix allow me to peek behind the curtains of a manufactured and manipulated world staged event?

The Journey begins … On 3/3 I took a flight from Luton, England to Krakow, Poland.

Via Poland seemed the easiest way into Ukraine.

Evan tho’ unvaxxed, I entered Poland with ease on the condition I left within 24 hours. So I wasted no time, and took a train from Krakow to Przemysl.

The only sign of WAR was the name of the café.

A well-planned stage-managed route ensures the Ukrainians arriving are bottled necked and compressed into the ticket hall so the media can create the illusion of ‘hell on Earth’.

Every 20 minutes, the sirens turn on and the vehicle does a loop around the block.

The ‘Video Village’ of Przemysl. Here we find the director and producer of the refugee movie.

I am unable to find a hostel or hotel, full of refugees you ask?

No! All the hotels in this town are taken up by the press.

Whilst these scumbags sleep in luxury, poor Ukrainians are left to sleep at the railway station.

1 min walk away from the movie set…

Bottle necking everyone through one door, the camera crews set up to capture this manufacturing chaos for the cameras.

You larp as a photographer, I’ll larp as a young man heading off to war.

The train into Lviv, Ukraine.

I arrive around 2 am, I help an old lady with her bags as she seeks information on travel to her hometown of Odessa. Once she is sorted with tickets, I take a closer look around.

Manufactured chaos once again, a curfew is enforced from 8 pm till 8 am meaning travelers can’t leave the station and are forced into participating in the fully immersive 4D crisis experience, complete with props like the TRASH CAN FIRE.

The train into Kyiv – I talked my way onto the overnight train. (Around £5 and a warm place to sleep).

There are many Ukrainians heading back in.

Just for the record, you can just buy a regular train ticket into Kyiv, either online or at the station. Trains are running as normal.

Filming around Kyiv train station was near impossible.

Talking/texting on the phone was ok. The moment you turned the phone into the filming position … Agent Smiths with guns would appear.

I got pulled aside twice within 10mins. So I left.

I take a walk to the supermarket, no signs of a war yet.

Only the very familiar feeling of a LOCKDOWN, is this the result of war?

Or is this the government and corporations creating the illusion of a war to economically force People out of the city?

I walk the street and see no evidence of this as of yet.

My first Air raid siren … and no one cares.

Audio sound effects are another way to create the illusion of war.

Shut everyone inside for a curfew and blast sirens across the city to scare the shit out of people.

Everyone told me “there is no hotels or hostels in Kyiv, it’s a war zone!!”…

Truth, there is an abundance of places to stay!!

I picked a cheap hostel as I’m on a budget.

(So everyone understands, I’m a night club bouncer with about £1000 to my name.)

Each day I wake up, grab a coffee and continue to walk the streets in search of a War.

I gave up on taxi drivers on day one, they wanted cash (which is hard to find in Kyiv as all ATMs are dry) but understandably they didn’t want the attention of driving a foreigner to Irpin.

The city of Kyiv is now a movie set…

Come experience the illusion of war as we walk through the Hollywood set know as Kyiv.

PROPS such as abandoned cars, blockades and checkpoints are placed around the city by the visual effects team for a fully immersive 4D experience.

Tip: Always carry an item and receipt whilst walking around a movie set like Kyiv.

(There are many Agent Smiths in blacked out vehicles driving around.)

There is lots of food in Kyiv!

If there are people in the city that can’t eat it’s more likely because they have been economically destroyed by the government shutting down any way to earn a living.

Alcohol has been prohibited.

I walk in the direction of Irpin and come across this hospital, there’s armed guards outside so I film the side.

Irpin is a 30 min drive away, wouldn’t there be sounds of war? And wounded soldiers?

I walk and walk, getting onto the Irpin film set is near impossible.

The metro is open and running but has armed police that want to search you before entering.

No, the boiler fell off the wall and water is spraying across the shower room slowly flooding the 1st floor.

The good news is I get moved to a room with a heater. Nearly had room 33.

The 8th of March…

And blizzard with coffee to start the morning.

After endless walking around the city for the past few days, I decide to revisit Kyiv’s main train station.

Another manipulated crisis situation could be avoided if the government really cared about its people.

Still no visible signs of war in the city.

Kyiv is the big cheese is this illusion, I have no interest in the hundreds of ex-soviet empty and derelict villages.

The military has been using those villages for target practice and war games since the USSR fell.

The more people that leave Kyiv the more the city becomes a blank canvas … just think how many ‘soldiers fighting’ they could digitally add to this scene.

“The noose is tightening around the capital” – a reporter in Kyiv train station wearing a flak jacket whilst nobody else is.

It’s true, the station was mad busy a few days ago, but he has perfectly placed himself on the walkway, the lower levels are empty these days.

The Q(ueue) movement in Kyiv…

I would encourage people to look up ‘The Art of Queueing’ … Disney has invested billions into the psychological research of Queueing.

Queueing is a demoralizing activity and very important in all PSYCHOLOGY OPERATIONS.

The art of queueing read HERE.

And ACTION!!
(Cue the Tank

One tank drives down the street. Do you think he’s just driving the long way to the front lines?

Or is this part of the illusion? Ordering one tank down the street to scare people.

Believe it not, whilst I was filming this, I had an army guy walking 2 steps behind me (I didn’t know of course). He asked what I was doing here. I just replied, “google said there is a supermarket close by, do you know where it is?”

(He spoke good English. He was a nice guy.)

Running out of food they say….

Or maybe they are not allowed to work and earn money?

Maybe their right to ignore this and carry-on living has been taken away.

Maybe the innocent Ukrainians are being economically forced into LARPing this war.

Filmed on the 9th of March.

The Battle for Kyiv.

Active fighting has hit the streets they said.

Russian tanks rolling in they said.

I beg to differ good sir.

A static copy of Lez’s first twitter thread is attached below.

They are increasing war games very close to the cities yes.

Shelling empty fields close to ghost towns like Dombas, Hostomel, etc… They have been doing that for 8 years now, it’s military training grounds.

Kyiv is the big cheese, Kyiv is all that matters.

Cashed out! Hostels want cash and I’m officially out.

All the cash points are dry, I tried offering to pay for people shopping on my card in exchange for cash (less than what they were meant to pay of course to make it a good deal) but they didn’t understand.

I decide to head to Lviv, the streets are quiet today! It’s like the simulation hasn’t rendered any avatars.

Note: The government Text msg was what to do in a fire. (To scare the masses into thinking their houses will bombed.)

I just don’t get it! Are all the LARPers having a lazy day?

4-hour wait in the station. Then a platform is confirmed. The train is really busy, lots of people with lots of Luggage.

I choose to sit with a dog. More fun and more space.

I did consider LARPing along maybe get a Ukrainian passport out of it…
But then I’m consenting to war.

This Universe is all about consent.
So be careful what you consent to. https://t.co/sDZvvVoJVl

So a mass of people are fleeing Kyiv, they decide to put on reduced train service. And, of course, the mainstream media will feast on the manufactured chaos.

We are all waiting so long we have time to switch over to a diesel train, Ukrainians say it’s faster (sorry Greta).

Whilst on the train I chat to regular Ukrainians, they tell me that actually the train service is always terrible (regardless of the phoney war).

Quote ‘the train could leave in 1 minute or 10 hours, you just don’t know.”

A follower tweeted at Lez: “Glad you are getting out of Kyiv. Any chance you are headed to the border to report on the refugees?”

“Yeah, I although I think that part might be dying down now.

“But I need a little day’s rest, wash my clothes and so on…

“I only took one set of things to wear. I didn’t expect to get past Poland tbh.”

Another follower, Climate Warrior who displays the Ukrainian flag on his profile, tweeted: “I recommend checking out @LezLuthor. Seems to be a British guy who, convinced the war is all theatre, actually traveled to Ukraine. He is now traveling around Ukraine insisting there is no war there. Regardless of your opinion, you have to admire that kind of determination.”

This ain't my first rodeo…

I also lived in Egypt during the revolution and worked in a hospital during the scamdemic.
Born and bred in London with the non stop illusion of terrorism from the IRA and Islamic extremists.

All war is illusion. https://t.co/kcQLdBeSv3

At the time of writing, Lez’s latest tweet read:

The THEATRE of WAR…

Are you getting it yet?