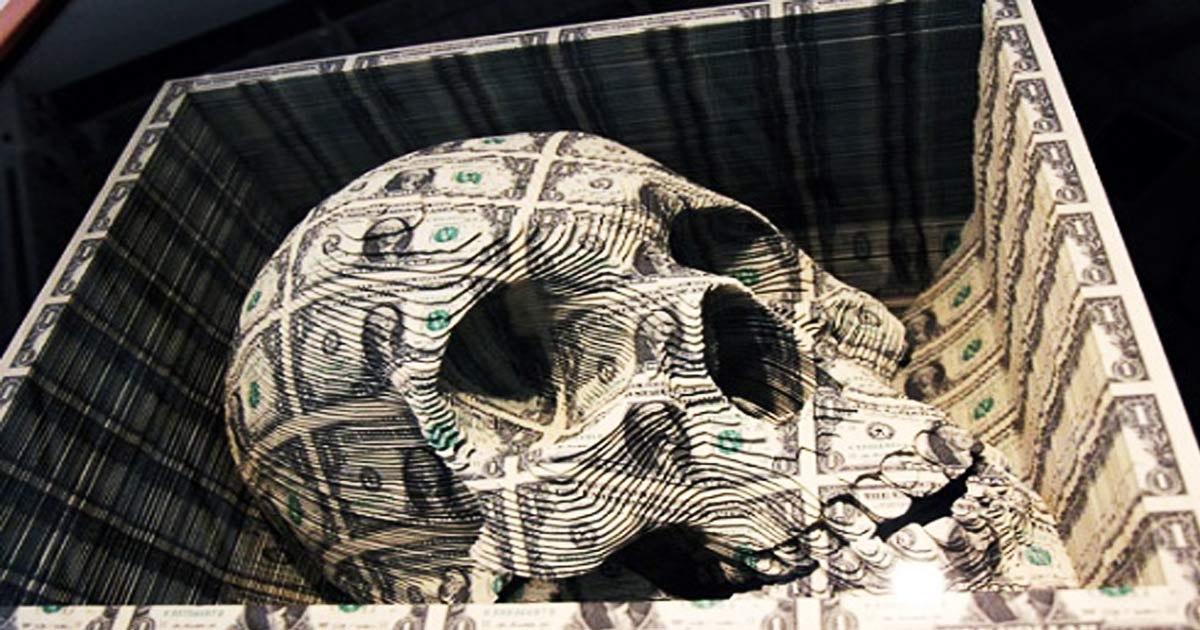 Today, stock market investors are hoping desperately for Weimar-style hyperinflation to boost equities prices to dizzying heights in what some call a “crack-up boom”. In terms of money creation, we are not there yet, but such levels of fiat printing could happen within the next year. Unfortunately for investors, this “boom” in stocks may not happen again. In fact, it already happened over the course of the past several years, and now the party is over. In the past few months, the U.S. dollar has entered a massive liquidity crisis, and despite all expectations, the Fed’s attempts to compensate with stimulus measures have done little to boost markets back to their previous glory.

In Weimar Germany, stocks did get an epic rally, until it all came crashing down in 1924 and then again in 1927. The notion of the endless fiat-driven bull market is a lie perpetuated by central bankers and their cheerleaders.

As I warned in past articles, when the Fed finally decided to step in to “stall the crash”, it was after it was far too late. The Fed has no intention of stopping the crash, they WANT a crash; they created all the conditions necessary for the collapse of the Everything Bubble to happen. Their goal now is only to make it appear as though they “did everything they could” to save the economy while staging the collapse of the final bubble: the U.S. dollar and its global reserve currency status.

The problem for markets is not just the coronavirus pandemic, but I’ll get to that. The real issue is that the primary support pillar for equities has disappeared; namely corporate stock buybacks. The new bailouts might actually create a ban on the practice in the future, which guarantees declining market values unless the central banks step in to purchase stocks directly. Even then, asset values will probably still fall over time, but at a slower pace.

Keep in mind that the trillions of dollars in loans that have been feeding corporate share prices through buybacks over the past few years just went up in smoke due to the downturn. Companies have been using central bank repo loans to juice stocks beyond all reason. In the past three years, the valuations have been ridiculous compared to the dismal earnings of the same businesses. All that cash was wasted, and these corporations remain in debt up to their eyeballs.

But perhaps they don’t care anymore. I’m sure many CEOs understand that while their companies might flounder in the midst of a pandemic crisis and economic crash, they as individuals will be well taken care of. No banker, no CEO, no high-level politician is going to be punished for the financial calamity that is on our doorstep. Just as in the 2008 crash, they will all be given a seat at the table and their sabotage of the economy will be ignored. The only consequences they might face will be if the public becomes enraged enough that the torches and pitchforks are finally brought out.

For now, the populace is absorbed in the drama of the viral outbreak, and I don’t think economic concerns have quite struck the majority yet. They will soon, though, as people begin to realize this event is going to last a lot longer than they have been told. Even if the infection numbers diminish over the course of this month, as many assume, the greater threat at hand is that governments will assert that this is because the “lockdowns work”. If the lockdowns “work”, then the lockdowns will continue.

Read: How to protect yourself from long term lockdown

Using the wave model of conditioning, governments will allow the public brief moments of breathing room in which lockdowns are lifted for a short time; maybe a month or less, followed by a resurgence of infections and then hard lockdowns return for another couple of months. This process is not going away anytime soon. Understand that there are over seven billion people on the planet, and we have a long way to go before the majority of the population has either recovered from the virus or died from it.

This means endless cycles of suppressed business activity, supply chain breakdowns, business closures and job losses. The central banks and governments have created an environment in which the ONLY source of relief is monetary policy and Universal Basic Income (UBI). Ultimately, nationalization of most “essential businesses” will have to occur under this model. Eventually the Defense Production Act will be fully implemented. This means that dollar devaluation will accelerate beyond anything we saw during the credit crisis ten years ago, as governments bond completely with corporations to form a megalith of socialist production control.

Foreign central banks are dumping U.S. Treasuries on a large scale right now, partially because the liquidity crisis has forced them to sell assets to accumulate dollars, but also because with the Fed moving into what looks to be an infinite stimulus model, U.S. Treasuries are no longer a viable means to protect wealth or make a profit. This means the only buyer left to fund the U.S. government will be the central bank.

In 2008, this process took place, but never on a scale that is needed today. With so many small businesses closing shop, corporations drowning in historic levels of debt, and the average consumer losing their jobs and their income, the establishment is about to become the sugar daddy to everyone that is not self-sufficient. The level of dollar creation that will be needed just to keep the system running for the next six months will be staggering; I am talking tens of trillions of dollars.

Will the dollar as we know it survive this? No, not a chance. The dollar will continue to lose value, causing painful price inflation, and eventually its global reserve status will be destroyed. But the elites already have all this figured out. Indeed, they actually benefit from it.

First, small businesses will be crushed, and all assets absorbed into the banks and major corporations. Small business loans under the new government bailout will in most cases only cover payroll for employees for a short time during the lockdowns and will not necessarily ensure business survival. Just as in the Great Depression, when thousands of small private banks defaulted and were devoured by JP Morgan, trade and production during Great Depression II will be gobbled up and centralized into very few hands. Get ready for the big box stores like Walmart and Costco to become the only options in your area.

Second, the crash will allow the establishment to test out their “Modern Monetary Theory” model and entice the public into accepting the idea of monthly UBI. This money will not be enough to keep many people afloat for very long without reversion to third world standards, but if the economic situation becomes desperate enough, large portions of the public might see it as “better than the alternative”, which would be starvation on the level of a refugee camp.

Third, the collapse of the dollar along with the pandemic opens the door to implementation of a cashless society, a goal long desired by the elites. Even now, there are bills being presented in the Senate which call for a digital dollar and digital wallet policy to be instituted in the U.S., the Fed is considering the prospect on their own, and other central banks around the world are increasing their pace of cash removal in the name of “preventing the spread of the virus”.

With the amount of fiat creation that is necessary to support almost the entirety of the U.S. economy for the next several months, I suspect the dollar’s global reserve status will come under question before the end of the year. In the meantime, the establishment will attempt to force the idea of a digital currency system into daily public discussion.

With a dollar collapse, the populace will have little choice but to either bow down to the new digital system or go rogue and start building their own systems using their own production, barter, local scrip, and gold and silver. This is the world we are heading into, make no mistake. Be ready for it.