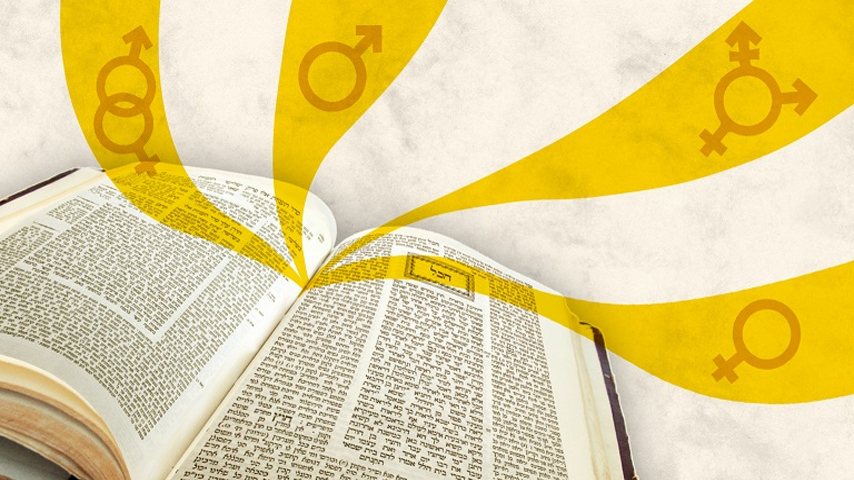 Thought nonbinary gender was a modern concept? Think again. The ancient Jewish understanding of gender was far more nuanced than many assume.

The Talmud, a huge and authoritative compendium of Jewish legal traditions, contains in fact no less than eight gender designations including:

In fact, not only did the rabbis recognize six genders that were neither male nor female, they had a tradition that the first human being was both. Versions of this midrash are found throughout rabbinic literature, including in the Talmud:

Rabbi Yirmeya ben Elazar also said: Adam was first created with two faces (one male and the other female). As it is stated: “You have formed me behind and before, and laid Your hand upon me.” (Psalms 139:5)

Rabbi Yirmeya ben Elazar imagines that the first human was created both male and female — with two faces. Later, this original human being was separated and became two distinct people, Adam and Eve. According to this midrash then, the first human being was, to use contemporary parlance, nonbinary. Genesis Rabbah 8:1 offers a slightly different version of Rabbi Yirmeya’s teaching:

Said Rabbi Shmuel bar Nachmani: In the hour when the Holy One created the first human, He created for him a double face, and sawed him and made him backs, a back here and a back there, as it is said, “Behind and before, You formed me” (Psalms 139:5).

In this version of the teaching, Rabbi Yirmeya is not focusing on the first human’s face (or, rather, faces) but on their sex organs — they have both. The midrash imagines this original human looked something like a man and woman conjoined at the back so that one side has a women’s face and a woman’s sex organs and the other side has a man’s face and sex organs. Then God split this original person in half, creating the first man and woman. Ancient history buffs will recognize this image as similar to the character Aristophanes’ description of the first humans as both male and female, eventually sundered to create lone males and females forever madly seeking one another for the purposes of reuniting to experience that primordial state. (Plato, Symposium, 189ff)

For the rabbis, the androgynos wasn’t just a thing of the mythic past. The androgynos was in fact a recognized gender category in their present — though not with two heads, only both kinds of sex organs. The term appears no less than 32 times in the Mishnah and 283 times in the Talmud. Most of these citations are not variations on this myth, but rather discussions that consider how Jewish law (halakhah) applies to one who has both male and female sexual characteristics.

That the androgynos is, from a halakhic perspective, neither male nor female, is confirmed by Mishnah Bikkurim 4:1, which states this explicitly:

Because Hebrew has no gender neutral pronoun, the Mishnah uses a male pronoun for the androgynos, though this is obviously insufficient given the rabbinic descriptions of this person. Reading on we find that the androgynos is, for the rabbis, in many ways like a man — they dress like a man, they are obligated in all commandments like a man, they marry women and their “white emissions” lead to impurity. However, in other ways, the androgynos is like a woman — they do not share in inheritance like sons, they do not eat of sacrifices that are reserved only for men and their “red discharge” leads to impurity.

The Mishnah goes on to list ways in which an androgynos is just like any other person. Like any human being, “one who strikes him or curses him is liable.” (Bikkurim 4:3) Similarly, one who murders an androgynos is, well, a murderer. But the androgynos is also unlike a man or a woman in other important legal respects — for instance, such a person is not liable for entering the Temple in a state of impurity as both a man and woman would be.

As should now be clear, the rabbinic interest in these gender ambiguous categories is largely legal. Since halakhah was structured for a world in which most people were either male or female, applying the law to individuals who didn’t fall neatly into one of those two categories was challenging. As Rabbi Yose remarks in this same chapter of the Mishnah: “The androgynos is a unique creature, and the sages could not decide about him.” (Bikkurim 4:5)

In many cases, the androgynos is lumped together with other kinds of nonbinary persons as well as other marginalized populations, including women, slaves, the disabled and minors. For example, concerning participation in the three pilgrimage festivals (Passover, Shavuot and Sukkot) during which the Jews of antiquity would travel to the Temple in Jerusalem, the mishnah of Chagigah opens:

All are obligated on the three pilgrimage festivals to appear in the Temple and sacrifice an offering, except for a deaf-mute, an imbecile, and a minor; and a tumtum, an androgynos, women, and slaves who are not emancipated; and the lame, the blind, the sick, and the old, and one who is unable to ascend to Jerusalem on his own legs.

As this mishnah indicates, it is only healthy, free adult men who are obligated to appear at the Temple to observe the pilgrimage festivals. People who are not adult men, and men who are enslaved or too old or unwell to make the journey, are exempt.

As we have already stated, the androgynos was not the only person of ambiguous gender identified by the rabbis. Similarly, the rabbis recognized one whose sexual characteristics are lacking or difficult to determine, called a tumtum. In the mishnah from Bikkurim we cited earlier, Rabbi Yose, who said the androgynos was legally challenging for the sages, said the tumtum was much easier to figure out.

For the rabbis, what is most significant about the aylonit and the saris is that they are presumed infertile — the latter is sometimes translated as “eunuch.” Their inability to have offspring creates legal complications the rabbis address, for example:

A woman who is 20 years old who did not grow two pubic hairs shall bring proof that she is twenty years old, and from that point forward she assumes the status of an aylonit. If she marries and her husband dies childless, she neither performs halitzah nor does she enter into levirate marriage.

A woman who reaches the age of 20 without visible signs of puberty, in particular pubic hair, is deemed an aylonit who is infertile. According to this mishnah, she may still marry, but it is not expected that she will bear children. Therefore, if her husband dies and the couple is in fact childless, his brother is not obligated to marry her, as would normally be required by the law of levirate marriage.

A nonbinary person who does not have the same halakhic status as a male or female, but is something else that is best described as ambiguous or in between, presented a halakhic challenge that was not particularly foreign for the rabbis, who discuss analogs in the animal and plant kingdoms. For example, the rabbinic texts describe a koi as an animal that is somewhere between wild and domesticated (Mishnah Bikkurim 2:8) and an etrog — yes, that beautiful citron that is essential for Sukkot — as between a fruit and a vegetable (Mishnah Bikkurim 2:6, see also Rosh Hashanah 14). Because they don’t fit neatly into common categories, the koi and the etrog require special halakhic consideration. The rabbinic understanding of the world was that most categories — be they animal, vegetable or mineral — are imperfect descriptors of the world, either as it is or as it should be.

In recent decades, queer Jews and allies have sought to reinterpret these eight genders of the Talmud as a way of reclaiming a positive space for nonbinary Jews in the tradition. The starting point is that while it is true that the Talmud understands gender to largely operate on a binary axis, the rabbis clearly understood that not everyone fits these categories.