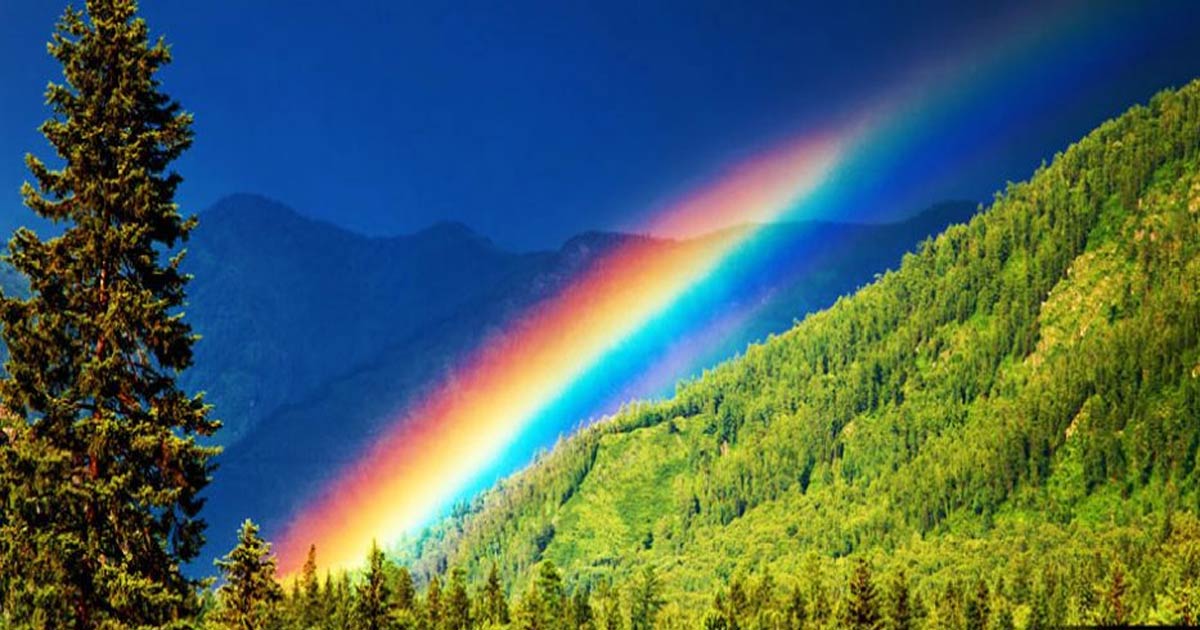 God’s rainbow, the one that He set in the sky as a sign to Noah, has 7 observable colors in it – red, orange. yellow, green, blue, violet, and indigo.

I was reading earlier how Skittles traded in its iconic rainbow packaging for a monochromatic black-and-white design in honor of LGBTQ+ P for Pedophile Pride parade celebrations in London this week.

“And I will establish my covenant with you; neither shall all flesh be cut off any more by the waters of a flood; neither shall there any more be a flood to destroy the earth. And God said, This is the token of the covenant which I make between me and you and every living creature that is with you, for perpetual generations: I do set my bow in the cloud, and it shall be for a token of a covenant between me and the earth.” Genesis 9:11-13 (KJV)

The candy company joined in the celebration earlier this week and handed out limited-edition black-and-white bags filled with white Skittles, with a black S imprinted on them. An all-white Skittles float was also seen making its way through the thousands of revelers during the Pride parade in London.

And it got me thinking about the major difference between God’s rainbow and the counterfeit LGBT Pride rainbow symbol.

God’s rainbow, the one that He set in the sky as a sign to Noah, has 7 observable colors in it – red, orange. yellow, green, blue, violet, and indigo. The number 7 is strongly associated with God and His perfect completeness. Please note the following about the number 7:

Further, there are the 7 Mysteries given to the apostle Paul, 7 baptisms of fire, 7 resurrections, and a whole host of other 7’s. Multiples of 7 also figure into the biblical narrative: the “seventy weeks” prophecy in Daniel 9:24 concerns 490 years (7 times 7 times 10). Jeremiah 29:10 predicted the Babylonian Captivity would last for seventy years (7 times 10). According to Leviticus 25:8, the Year of Jubilee was to begin after the passing of every forty-ninth year (7 times 7).

Are you starting to get the picture? The number 7 in the Bible as well as in nature shows the completeness and perfectness of our Heavenly Father. The number 6, on the other hand, does not fare so well. The number is first mentioned in connection with the flood of Noah, and last-mentioned with the Mark of the Beast and the Battle of Armageddon. All judgments on sin. The Mark of the Beast includes three 6’s, a complete judgment on sin.

How many colors are in the LGBT Pride Rainbow? You guessed it – 6.

Gilbert Baker, an artist, and drag queen, first created the Rainbow Flag in 1978.

Baker’s rainbow flag actually originally had eight colors – hot pink, red, orange, yellow, green, turquoise, indigo/blue, and violet — but it gradually lost its stripes until it became the six-color version most commonly used today. Each of the colors has its own significance, he says hot pink for sex, red for life, orange for healing, yellow for sunlight, green for nature, turquoise for art, indigo for harmony, and violet for spirit.

A BRIEF HISTORY OF THE LGBT RAINBOW PRIDE FLAG

The flag lost its hot pink stripe when Baker approached the Paramount Flag Company to begin mass producing them – the hot pink fabric was too rare and expensive to include. The flag lost its indigo stripe before the 1979 Gay Freedom Day Parade. The committee organizing the parade wanted to split the flag in half and fly each part from the light poles along both sides of Market Street, so it became a six-striped flag. Baker says the flag was cemented as an international symbol in 1994 when he made a mile-long flag for the 25th anniversary of the Stonewall riots.

Now about that Pride thing…

As a Bible believer, I always found it odd that the LGBT would call their movement the Pride movement. The Bible says that all the ‘children of pride’ have a king set over them to rule them, and that king is the Devil who shows up as Leviathan in the book of Job:

And, oh yeah, that’s the sixth place where the word ‘pride’ appears in the Bible.