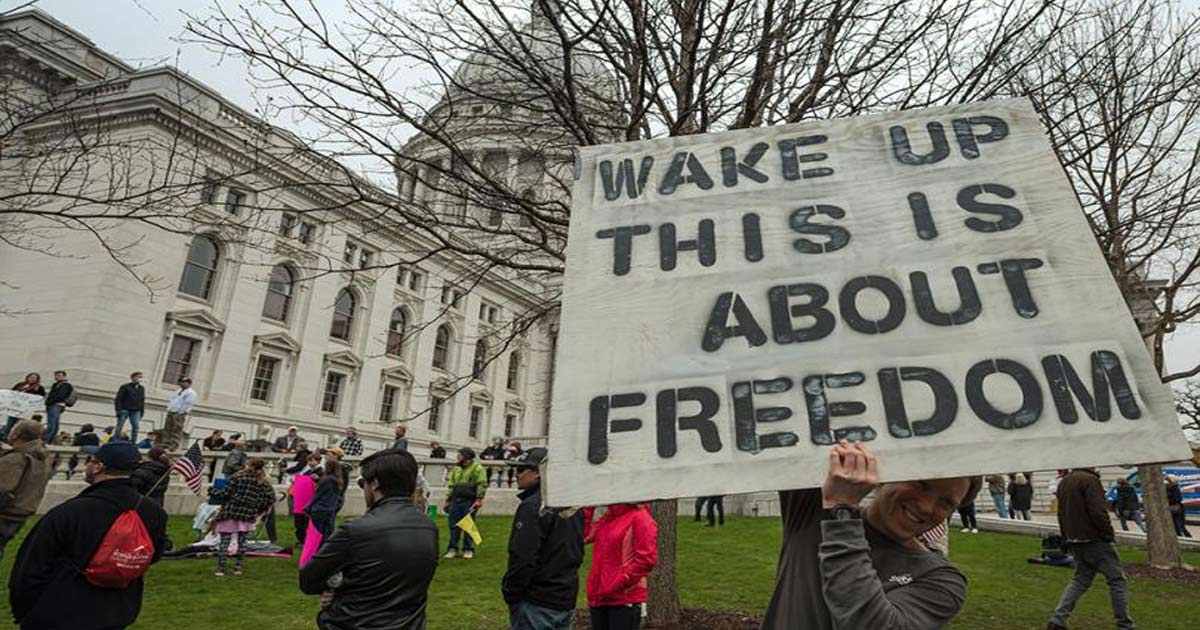 LifeSite staff were horrified today when we first saw this story from the city of Victoria in Australia – Pregnant Australian woman arrested at home for promoting anti-lockdown protest on Facebook. The insensitive abuse of power by those police officers and the ones who sent them is a warning to all of us that we must actively and strongly oppose these totalitarian restrictions that have proven to not make any medical or scientific sense.

If we don’t do this, I guarantee the ongoing violation of basic freedoms and rights will only get worse. It will lead to what the liberal, globalist supporters of these oppressive impositions have been calling “the new normal” from which they are determined we will never be able to go back to the way things were before.

Arresting, handcuffing and taking that pregnant mother away from her young children and partner was itself a criminal act by the two police officers.  Peaceful protesting has always been one of the most fundamental rights in democratic, free societies.

The policies that she was organizing a protest against not only cannot be proven to have been necessary, but they have also been devastatingly harmful to the economic and social fabric and well-being of every nation and community that has implemented them during this pandemic. They are wrong regardless of how many citizens have foolishly succumbed to the propaganda that they have been necessary.

In Victoria, the mask mandate law is medically useless no matter what anyone tells you. I reported on that subject in detail, quoting many physicians, scientists and government agencies in my two-part series on mandatory masking.

Lockdowns and isolating both the sick and all the healthy have proven to be a disaster everywhere they have been implemented. There has been no evidence of long-term medical or other benefits from them. In fact, the evidence coming out now is that lockdowns have caused enormous harm and likely led to a larger number of deaths than the number who died from the virus itself. And yet, Australia, California and other states and countries are still implementing them.

If you don’t accept that:

1) Immediately stop watching and reading ALL mainstream media. They have proven to be the source of the most fake news on the Wuhan virus.

2) Read the article excerpts below, which are only a small sampling of many more reports strongly indicating that the lockdowns were a tactic that should have never been approved and implemented.

The real danger of the Wuhan virus for the majority of the public ended some time ago. Like most viruses, it has gradually become much weaker and the medical establishment has learned how to treat it. Very few hospitals experienced the flood of virus-infected patients that was predicted by the deeply flawed Ferguson model. At the same time, a large number of people died or became very ill because they were either denied ordinary, but critically needed medical services during the lockdowns, or they wrongly believed that they would become infected by the Wuhan virus if they went to a hospital or clinic and would die from it. Instead, they died as a result of NOT going to the hospital or local clinic.

Liberal politicians and civil servants became evilly addicted to the enormous power over all citizens that they could only have dreamed that they could ever possess. They actually got away with it during the pandemic that has turned out to be far less lethal than media-concocted hysteria made it out to be.

There eventually has to be some serious justice arranged for what all these virus Nazis have done to their citizens and communities. They have to be held accountable for the great suffering and loss of lives they caused and the severe abuse of their positions meant to serve, rather than to lord it over the citizens. There must be crimes against humanity and other criminal charges laid in many instances, and some of these people put away in jail for a long time.

The terrible truth about lockdowns:

As Reuters reported July 15, the number of Swedish children between 1 and 19 years of age who have died of COVID-19 is zero. And the percentage of children who contracted the illness was the exact same in Sweden as it was in Finland, which locked down its schools.

In regard to teachers, Sweden’s Public Health Agency reported that “a comparison of the incidence of COVID-19 in different professions suggested no increased risk for teachers.” Nevertheless, with few exceptions, teachers in Los Angeles and elsewhere refuse to enter a classroom that has students in it. Their disdain for their profession has been superseded only by that of the Los Angeles teachers’ union, which announced that teachers will not resume teaching until the police are defunded.

The lockdown is a crime. But even more upsetting is that it is supported by so many Americans. This country is unrecognizable to those of us who lived through the 1968-1970 pandemic, which killed, according to the Centers for Disease Control and Prevention, approximately 100,000 Americans – the 2020 equivalent of 170,000 Americans. Nothing shut down. Not one mask was worn.

Governments have conducted an unprecedented social, economic, and political experiment in controlling whole populations’ behavior, with high economic and human cost. The authors ask the right question: Has this experiment in government-managed virus control and suppression made a difference? The startling answer they found, after examining data from around the country and the world, is that the evidence simply is not there.

If we are concerned about the evidence on this global experiment, we must concede that most government authorities have likely acted in error.

From mainstream publications like The Wall Street Journal to top government health advisers in the UK, a consensus is building that the sledgehammer of COVID lockdowns has been an unmitigated disaster. It’s good news that more mainstream sources are coming our way, but the dark forces of authoritarianism are not about to release their grasp so easily.

In response to the novel and deadly coronavirus, many governments deployed draconian tactics never used in modern times: severe and broad restrictions on daily activity that helped send the world into its deepest peace-time slump since the Great Depression.

The equivalent of 400 million jobs have been lost worldwide, 13 million in the United States alone. Global output is on track to fall 5 percent this year, far worse than during the financial crisis, according to the International Monetary Fund.

Despite this steep price, few policy makers felt they had a choice, seeing the economic crisis as a side effect of the health crisis. They ordered nonessential businesses closed and told people to stay home, all without the extensive analysis of benefits and risks that usually precedes a new medical treatment.

There wasn’t time to gather that sort of evidence: Faced with a poorly understood and rapidly spreading pathogen, they prioritized saving lives.

Five months later, the evidence suggests lockdowns were an overly blunt and economically costly tool. They are politically difficult to keep in place for long enough to stamp out the virus. The evidence also points to alternative strategies that could slow the spread of the epidemic at much less cost. As cases flare up throughout the United States, some experts are urging policy makers to pursue these more targeted restrictions and interventions rather than another crippling round of lockdowns.

“We’re on the cusp of an economic catastrophe,” said James Stock, a Harvard University economist who, with Harvard epidemiologist Michael Mina and others, is modeling how to avoid a surge in deaths without a deeply damaging lockdown. “We can avoid the worst of that catastrophe by being disciplined,” Mr. Stock said.

During the 1918-1919 flu pandemic, some American cities closed schools, churches and theaters, banned large gatherings and funerals and restricted store hours. But none imposed stay-at-home orders or closed all nonessential businesses. No such measures were imposed during the 1957 flu pandemic, the next-deadliest one; even schools stayed open.

Underprivileged populations and those in need are hit harder by crises. People at risk of starvation worldwide have already exceeded one billion. We are risking increased suicides, domestic violence, and child abuse. Malaise and societal disintegration may also advance, with chaotic consequences such as riots and wars.

“New York had a lockdown and had 30,000 people die. New York had the worst death rate of any place in the world amidst a lockdown,” Paul said on a Fox News podcast Wednesday. “I think Governor Cuomo should be impeached, you know for what he did, for the disastrous decision he made to send patients with coronavirus patients back to nursing homes.”

COVID-19 has been circulating for at least a year and yet there was no notable increase in unseasonable mortality anywhere until Lockdown regimes were imposed between late February and late March 2020. Let me repeat that: everywhere, the overall or “all cause” mortality data consistently tells the same story: there was no notable deviation from the statistical norm in any country until lockdown regimes were imposed.

According to the World Health Organization (WHO), at the time of writing, with 11,841,326 supposedly confirmed cases and 544,739 alleged deaths, this is a global pandemic that has infected approximately 0.15 percent of the global population and has allegedly led to the deaths of 0.007 percent. This makes it slightly less deadly than a bad seasonal influenza, which can kill 0.0085 percent of the world’s populace in a single year.

Yet governments around the world decided that the only way to respond to this particular respiratory infection was to roll out the most oppressive form of governance ever seen in the west, outside of a time of war.

The measures taken by our “elected representatives” have already killed many people and will prematurely end the lives of many more in the weeks and months ahead.

In light of all the other factors we have discussed, it is reasonable to conclude that the majority of deaths reported as COVID-19 mortality, by the world’s mainstream media (MSM), were not attributable to the syndrome itself, but rather to the various national and statewide lockdown policies.

These were lockdown regime deaths not COVID-19 deaths. By restricting access to health care for the most vulnerable, any claim that Lockdown Regimes save lives is patently absurd.