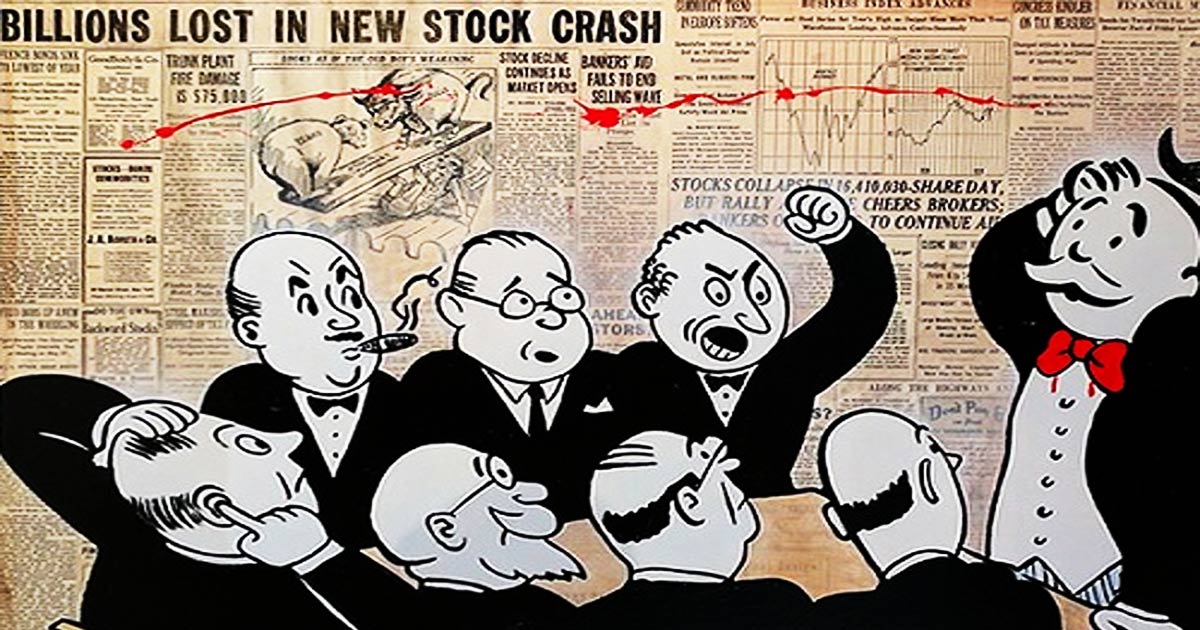 Last November, in an article titled ‘The Economic Crash So Far: A Look At The Real Numbers’, I outlined the reality of statistical fraud by governments and central banks to hide the ongoing economic downturn. The Everything Bubble, perhaps the biggest debt fueled bubble in history, has been propping up the global economy for several years, but began to waver dramatically at the end of 2018, as the Federal Reserve tightened liquidity conditions into economic weakness (just as they did in 1929 and in the early 1930’s as the Great Depression took hold).

In that article, I warned:

“If the global economy is not on the verge of collapse, then why did central banks keep propping it up for the past ten years? And if central banks have been propping up the system, how much longer do you think they can do this? How much longer do you think they want to do it? What if one day they decide to let the entire house of cards tumble? What if such an event actually benefits them?”

An important factor to this discussion is the idea that the central banks are “ignorant” to the damage they do. This claim is everywhere in the alternative media these days, and it is simply wrong. The banking elites are well aware of the damage they do, and often it benefits their bigger agenda of one world centralization. In fact, Jerome Powell openly admitted in the minutes of the October 2012 Fed meeting exactly what would happen if the Fed took actions to tighten cash flows while markets were addicted to stimulus. Then, as soon as he became the head of the central bank, he implemented that exact policy.

Almost nothing in finance and economics happens without being “managed”, or at least deliberately triggered by central banks. Economic crisis events are a form of massive leverage against the public. They are designed to siphon tangible wealth for pennies on the dollar from the middle class while also setting up social crisis conditions which allow the elites to manipulate the population into accepting less freedom and more globalism.

In the past, I have noted that the central banks have clearly been waiting for something or stalling the crash in preparation for a specific window of time. They needed an event that could be used as cover for the crash that they had been engineering. This event could come in many forms: The trade war was a perfect start, along with war tensions with Iran, but there was really no way of telling what the trigger would be. Well, now we know.

The COVID-19 pandemic is a perfect cover event. It is a virus with a strangely long incubation period coupled with being highly transmissible and just deadly enough (3% to 5% death rate) to cause fear within the population. This novel virus is not going to go away for a while; it will most likely stick to the global populace like glue for the rest of the year, and like the Spanish Flu which was active for around two years, the longer it circulates the more deaths accumulate.

But the virus is not the cause of the economic collapse; it is only a prime scapegoat, along with the very slow response times of many governments and the World Health Organization to encourage a shutdown in international travel from hot zones, which allowed the virus to spread unhindered. The collapse was taking place before the pandemic ever became a factor.

Read: How the Pandemic Crisis will develop over the next year

We are seeing this clearly now in the Fed repo market situation, which has continued to escalate as corporate beggars demand more and more liquidity that the Fed is either not able or not willing to supply. And by liquidity, I’m talking about tens-of-trillions; I’m talking about TARP level or greater fiat injections. I’m talking about direct purchases of stocks and other assets beyond bonds. The investment world wants the Fed to make it rain cash, and while it seems like that is what the Fed is doing…they are not even close yet.

Of course, the next question is, Will it even matter if the Fed initiated full blown helicopter Weimar-style inflation? The answer is no. If the Fed wanted to stall the crash, they would have introduced such measures over the course of the last year. Instead, they did the bare minimum to make it look like they cared about saving markets, which they do not.

The Weimar model, which some financial analysts out there foolishly used as a reason for predicting an endless stock market rally to Dow 40,000 and beyond, does not work because it never worked for Weimar. German stocks still collapsed in 1924, and then again after 1927; there is no precedent in which hyperinflation ensured increased stock profits or higher prices for very long, so don’t expect helicopter money from the Federal Reserve to help either.

Anyone with any sense can see that the prevailing factor of stock market performance has long been corporate stock buybacks, which have now conveniently dropped off the face of the Earth as the COVID-19 pandemic spreads. If you want to know why Fed intervention is doing nothing to reverse the damages in equities, the end of stock buybacks are a good starting point, along with the vast debts among corporations and consumers.

The black hole of debt that has been looming over the global economy has been set in motion, creating a negative feedback loop that makes any intervention useless, beyond a complete “economic reset”, which is exactly what globalists have been wanting and planning for years.

In the meantime, there has been a flight to safety – but what assets are safe? On the surface it looks like almost everything except the U.S. dollar is plunging in value – but looks can be deceiving. As I noted earlier this month in ‘Physical Gold Will Soon Break Free From The Paper Market In Spectacular Fashion’, reports are coming in that purchases of precious metals have skyrocketed, and currently silver rounds are selling for as much as $6 to $10 over the spot price, while gold rounds are selling for at least $50 over spot. The physical market is officially decoupling from the paper market.

At this point, we are seeing unprecedented events beyond even the 2008 credit crash. We must ask, What is our timeline? Looking at China, the first nation to be hit by the pandemic, their economy is still essentially shut down. Initial estimates were that Chinese manufacturing was going to restart on March 20, but reports from China and the Wall Street Journal indicate that this is not going to happen. Every sector of China’s economy has plunged, and it does not look like the supply chain on their side will be restarted in the near term.

This makes sense when you consider the possibility that China has been lying the whole time about the extent of the damage done by the virus. Italy, with a far lower population, has already surpassed China’s death count with half as many confirmed infections. How does a country with a billion people (many of them older), packed together in cities like sardines, maintain a death rate of only 2%, while Italy, a country with only 60 million people, has a death rate of around 6%? China has much to answer for, but I don’t think we’ll ever get the whole story.

COVID-19 is not likely to burn out in the spring as many are hoping, and going by China’s manufacturing shutdown, we have at least three solid months of crisis in the U.S. and Europe before there is a chance of remission.  But even if the virus does hit a wall, the economy will already be sunk beyond repair. This is the kind of collapse that takes years to recover from, and the global elites want to be the people that take charge of the recovery.

My biggest concern right now besides the supply chain issue is the potential for a liquidity crisis and credit crisis leading to a “bank holiday” – a widespread banking shutdown. I believe this will happen, and probably sooner than we might expect. Already the mainstream media is telling people NOT to remove any cash from their bank accounts, which is a bad sign. Usually when the MSM is telling you not to do something, it is time to do the opposite.

I am not necessarily encouraging people to make a run on the banks, but I will say that you better have some cash on hand through this crisis, because chances are good that you will wake up one morning and discover the banks locked and the ATMs unplugged.

Understand that this is not a short-term crisis that will correct itself. This is a long-term disaster. If you are not prepared accordingly, you must do so NOW. Time has almost run out.