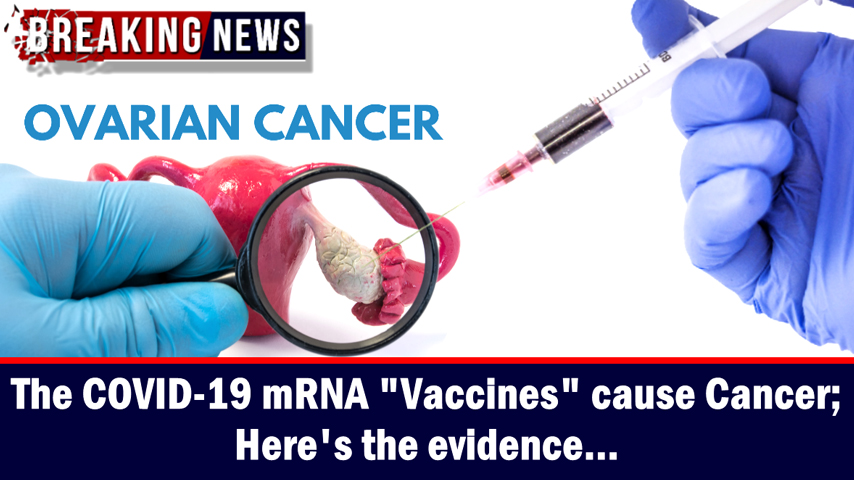 A monumental coverup is taking place to suppress the consequences of Covid-19 vaccination on women’s health. But unfortunately, the worst is still to come.

We now have scientific proof that the Covid-19 mRNA injections can cause cancer of the ovaries, pancreas and breast.

The homologous recombination DNA repair pathway is one of the mechanisms that the body uses to stop your cells from turning cancerous in response to environmental stress.

One of the most important components of this pathway is Tumor protein P53 (p53), the “guardian of the genome”. It protects our cells from cellular damage. Under cellular stress, p53 jumps into action, regulating gene expression to control DNA repair, cell division, and cell death. It is the most commonly mutated gene in cancer.

In October 2021, two revered scientists, called Jiang and Mei, had a paper published, after peer review, in MDPI, showing that the SARS-Cov-2 spike protein obliterated the DNA repair mechanism in lymphocytes.

The viral spike protein was so toxic to this pathway that it knocked 90% of it out. If the whole spike protein got into the nucleus (in the ovaries), and enough of it was produced and hung around long enough before the body was able to get rid of it all, it would cause cancer. Fortunately, in the case of natural infection, this is unlikely to occur.

Unfortunately, the experimental mRNA toxshot induces spike protein to be produced (the full-length spike exactly matching – amino acid for amino acid – the full length of the viral spike protein¹) in and around the cell nucleus² and is produced for at least 60 days and almost certainly longer³.

“Fact checkers” said the viral spike protein doesn’t get in the nucleus despite the expert scientists showing that it absolutely does.

Public health authorities and regulators said the vaccinal spike protein doesn’t get in the nucleus despite the mRNA manufacturers submitting pictures of it doing so to them as part of their emergency use application.

OK, so it gets into the nucleus but the official narrative says it doesn’t stay in the body for more than a few hours. But, a huge study by one of the most respected molecular biology groups in the world at Stanford university⁴ showed that the mRNA (producing the vaccinal spike antigen) was still present and active in the body after 60 days.

Jiang and Mei, quite logically and reasonably, cautioned that the mRNA spike protein would likely have the same effect as the viral spike protein on p53 and therefore cause cancer.

Two months after this revelation was highlighted by my friend, Jikky the Mouse, the Jiang and Mei paper was retracted due to spurious “expressions of concern” (EOC) about the methods of the study despite them being standard practice.

Moreover, the authors of the EOC were Eric Freed, the head of the US National Institute of Health (NIH) that funded Moderna, the patent holder of the COVID mRNA toxshot⁵ and Oliver Shildgen, the actual editor of the journal that originally accepted the paper! And neither of them declared a conflict of interest.

Well, despite the retraction, the spike protein circulating in large quantities, in the direct vicinity of the cell nucleus, for elongated periods of time, still has the potential to induce cancer in those cells (ovary, pancreas, breast, prostate, lymph nodes). These cancers can take years to develop and so it’s possible that we don’t see much of a safety signal for 5 or 10 years.