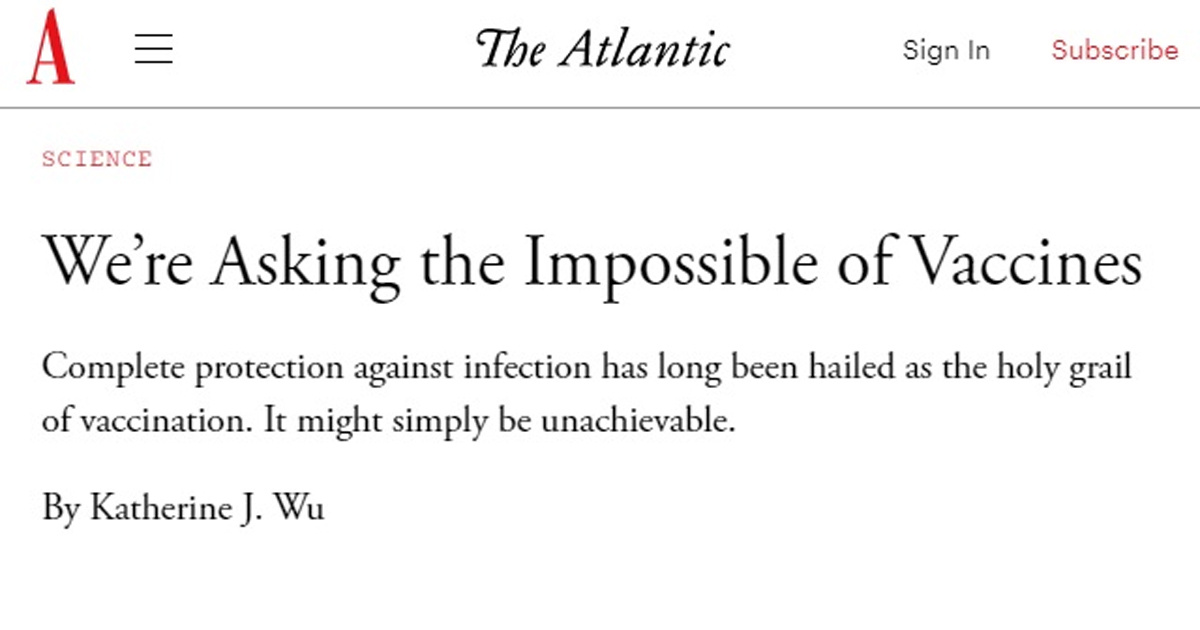 The Atlantic now says that expecting vaccines to give you immunity from covid is “asking the impossible.”

From The Atlantic (Archive):

We’re Asking the Impossible of Vaccines

Complete protection against infection has long been hailed as the holy grail of vaccination. It might simply be unachievable.

Some people hoped the COVID-19 vaccines could achieve sterilizing immunity, especially after reports in the winter and spring trumpeted the jabs’ surprising power at preventing infections—enough that the CDC told vaccinated people they could shed their masks in May. Then sterilizing immunity came back to bite us, when breakthrough infections began to pop up among the immunized, prompting fear and confusion among those who’d been certain that the vaccines alone could quash the coronavirus’s spread.

They believed that because that’s what you told them.

COVID-19 vaccines were never going to give us sterilizing immunity; it’s possible they never will. But the reason isn’t just their design, or the wily nature of the virus, or heavy and frequent exposures, though those factors all play a role. It’s that sterilizing immunity itself might be a biological myth.

…or maybe your rushed “vaccines” just aren’t that great?

In a rather striking admission, as part of a bid to give credibility to increasingly ineffective covid shots, Wu goes on to report that poxviruses like smallpox and meningitis probably weren’t eradicated by vaccines as we were all told.

That technical coarseness might help explain why several historical vaccines have been assumed to be sterilizing. With measles, for instance, scientists initially lacked the tests needed to show them otherwise, Diane Griffin, an immunologist at Johns Hopkins University, told me. When virtually no one fell ill after an inoculation campaign, researchers figured that infections had evaporated as well. Now, however, techniques are far more powerful, giving researchers the ability to zero in on even tiny blips of infection. Post-vaccination measles infections, though still uncommon, are much more “regularly observed” than they were once believed to be, Griffin said.

As detection tools improve, each data point further erodes the mythos of sterilization. With enough scrutiny, the experts I spoke with told me that similar illusions can probably be shattered against supposedly “sterilizing” shots that guard against other pathogens, including poxviruses such as smallpox, bacteria that cause meningitis, and the parasites that cause malaria. “I think it’s literally chasing rainbows,” [Mark Slifka, an immunologist and vaccine expert at Oregon Health & Science University] said. “The closer you get, the sooner you realize it’s not there.”

Remember how Scientific American, in order to scare people into taking covid seriously, reported in late April 2020 that the CDC’s yearly reported flu deaths are “substantially” overestimated “in order to encourage vaccination”?

Now every week we see another article about how flu deaths “disappeared” amid the corona “pandemic.”

Perhaps it’s more useful, Yonatan Grad, an epidemiologist at Harvard, told me, to understand the ideal of sterilizing immunity as just that—an ideal, rather than a practical goal, like the unattainable end of an asymptote. […]

For most of vaccination history, humans have been guided by stopping sickness, and that’s been enough.

Ireland, where nearly 90% of the adult population is vaxxed, reported Friday that 54% of patients in their hospitals with covid were fully vaccinated (which is an underestimate as they define “fully vaccinated” as being two weeks out from your last double jab or one week out from your second jab for Pfizer).

They bullsh*tted us about the effectiveness of vaccines against smallpox, meningitis, measles, and the flu… so we should definitely believe them on covid!

If you’re not “persuaded” by their argument (and prepping for your third and fourth boosters if you’re already vaxxed in order to be considered “fully vaccinated”) then they’ll just put you on the No Fly List!

NEW – Dr. Fauci calls for unvaccinated Americans to be banned from air travel and to mandate #COVID19 vaccines for school children.pic.twitter.com/AyYL0F8xkM

If you keep being “recalcitrant,” the regime will just have to force you to take it!

The same people working on lowering the penalty for fentanyl trafficking, doing nothing about the obesity epidemic, encouraging children to “transition” with dangerous cross-sex hormones and genital mutilation surgeries, and opening our borders to unlimited third-world immigration without a care in the world about importing other covid strains or other exotic diseases really care so much about our health!

They want nothing more than for us to be healthy and have “superhuman immunity”!

CDC just warned that 15,000 Americans will die EACH WEEK by Christmas; but it’s actually VACCINE DEATHS that are accelerating just as independent doctors told us all along