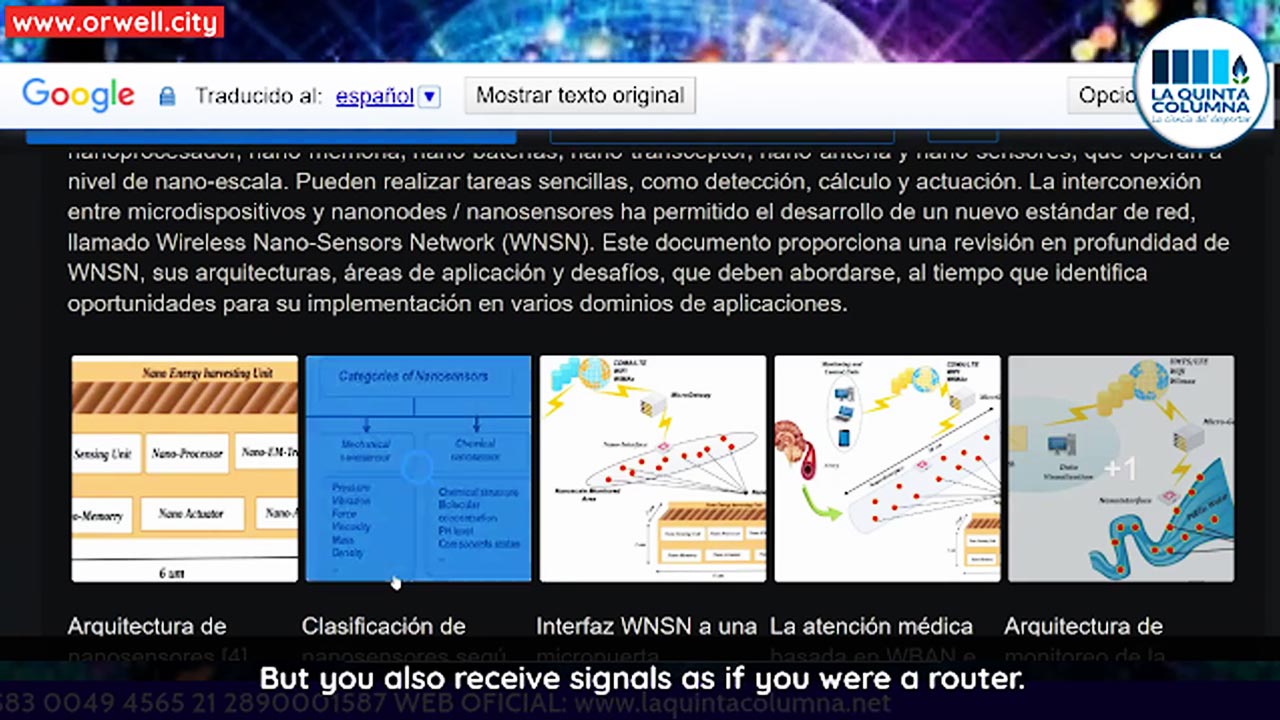 La Quinta Columna and its collaborating scientists are daily deepening their knowledge on the subject of nanotechnology that’s being inoculated in the population.

In the most recent program, the biostatistician Ricardo Delgado has commented on a paper that has a direct relation with the construction of the nano-network that makes the inoculates generate MAC addresses.

Here we’re getting very close to everything described by Mik Andersen —which is the pseudonym of a great scientist— on the Corona2Inspect blog when he identified all the patterns in the scientific literature with the patterns found in the Pfizer vaccine —which Dr. Campra already analyzed—, based on the images.

If you don’t know and you have been vaccinated, you should know that you have, inside your body, the artillery of nano-sensors, nano-technological nano-routers that, on the one hand, are going to collect all the biomedical electrophysiological markers of the person and, on the other hand, are provoking an artificial neuronal network that will replace the natural one. Hence, strange behaviors occur or, if you’re vaccinated, you might feel particularly strange. We’re talking, if you like, about technological parasitism. Of course, carried out with graphene oxide.

I’m going to zoom in on it. Let’s look at this paper. This article says, “Recent advances in nano-materials and nano-technology have paved the way for building nanometer-sized integrated devices.”

This is where I tell you that nanotechnology has come a considerably long way, behind the backs of civil society to get to do this to it.

Unfortunately, our doctors have absolutely no knowledge of this. And yet, they have been set up as the biggest spokesmen in the vaccinology world.

“These nano-nodes are composed of nano-processor, nano-memory, nano-batteries, nano-transceiver, nano-antennas, and nano-sensors that operate at the nano-scale level. They can perform simple tasks such as sensing, computation, and actuation. The interconnection between microdevices and nano-nodes / nano-sensors has enabled the development of a new network standard called Wireless Nano-Sensor Network (WNSN). This paper provides an in-depth review of the Wireless Nano-Sensor Network (WNSN), its architectures, application areas and challenges, which need to be addressed while identifying opportunities for its implementation in various application domains.”

In other words, we’re talking about nanotechnology that recreates the communication technology we already know. But in this case, inside the body. We’re talking about nano-communications. And this is the vaccine, ladies and gentlemen. The Pfizer, AstraZeneca, Moderna, and Janssen vaccines. All of them are nano-technology for nano-communications. So you emit, the vaccinated ones, a MAC address in Bluetooth wireless technology. But you also receive signals as if you were a router.

You can check it out at any time. Well, here’s the PDF, and you can download it. Of course, the material that shows up here… It’s got to show up somewhere. It’s the same old material. Here it is.

“Antennas, particularly graphene-based.” Can you read it? Here I’m going to highlight it. Let’s see if it’ll let me to. “Graphene.” Here it is. See? It couldn’t be any other way.

Do you understand why they want to hide the graphene found in vaccines? Or the magnetism or biomagnetism that graphene causes in inoculated people? You do understand, don’t you? They’re denying it like any criminal. Logically, what should be done is to put all those people in jail.

Covid vaccines and the obsession of breaching the Blood Brain Barrier