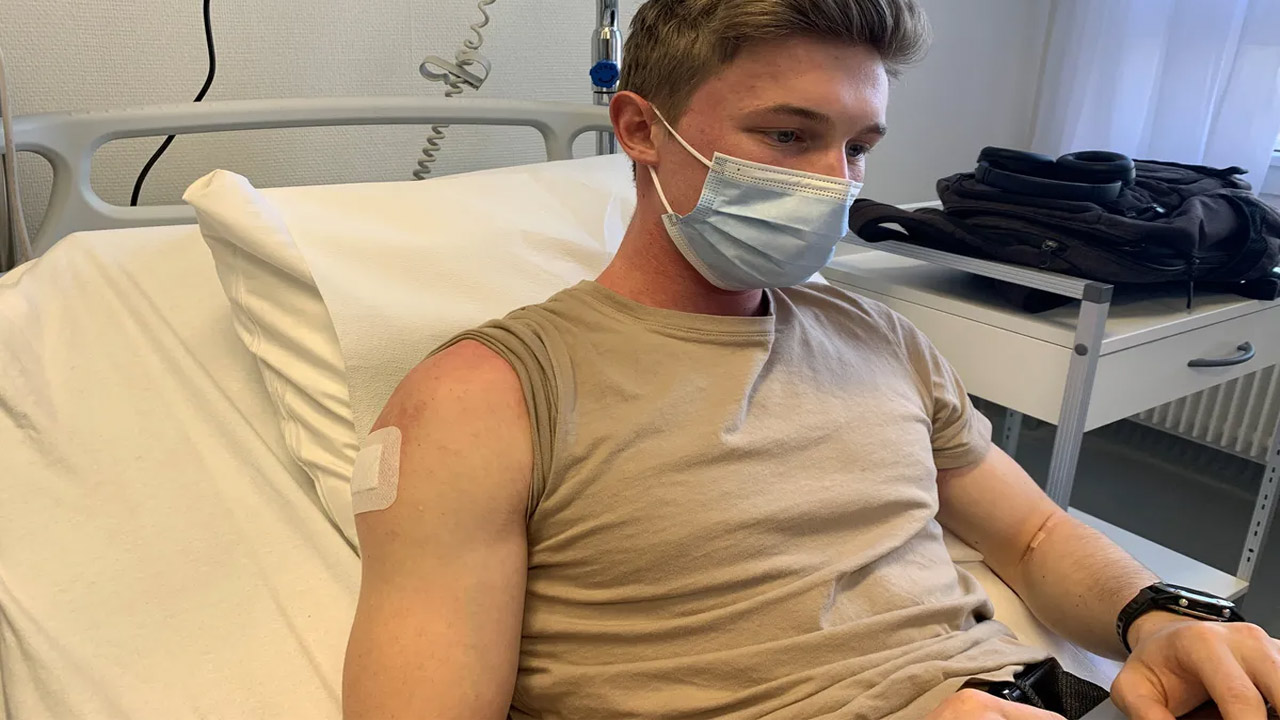 Volunteer Julien Oppliger rests after receiving a new generation COVID-19 vaccine administered via an arm patch during a Phase I clinical study, led by Unisante at the University Hospital in Lausanne, Switzerland, Jan. 19, 2022.CECILE MANTOVANI/REUTERS

Medical researchers from Switzerland announced today they’ve started testing a COVID-19 vaccine arm patch. Unlike a conventional syringe and needle, the vaccine arm patch delivers the ingredients of the injection via multiple micro-needles less than one millimeter in length. To administer the vaccine, the patch is momentarily pressed against the skin briefly and then removed.

In addition, Swansea University in Wales has announced the development of its vaccine smart patch. Theoretically, the disposable micro-needle gadget could deliver the COVID-19 booster and observe its efficacy by quantifying the body’s immune response.

Swansea University’s goal is to have the smart patch ready for the market within three years.

The vaccine smart patches are millimeter-long micro-needles, made from polycarbonate or silicon, and pierce the skin to dispense a vaccine.  The smart patch is to be strapped or held on to the hand for one day. During this time the device will measure the patient’s inflammatory response and biomarker’s in the skin response to the COVID-19 vaccine.

According to Dr. Sharma with the Swansea University research team, “Beyond the pandemic, the scope of this work could be expanded to apply to other infectious diseases as the nature of the platform allows for quick adaption to different infectious diseases.”

One Ph.D. student stated the device could benefit people who are scared of needles and injections. “They do not penetrate as deeply into the skin and they do not stimulate the pain receptors, so they’re less painful than a hypodermic needle,” she said.

The vaccine smart patch has the ability to validate when the patient received the required vaccine via a quick scan over the hand with a smartphone.

Note the word sorceries.  In Greek sorceries translates to “Pharmakia,” which is a medicine to drug, poison or “cast a spell.”

Again, a “spell” has been authorized by God and cast over the world for not repenting.

God has allowed a lying spirit to deceive the people of this world.

COVID-19 is the greatest deception the world has not seen.

Once ready for market, the vaccine smart patch could be shipped to your home. Just put it on your hand, take off the sticker, and you’ve been vaccinated. The band-aid contains tiny needles, purposely designed as snake viper fangs. And yes, I’m sure this wasn’t a coincidence either.

During a recent interview Catherine Austin Fitts, publisher of the Solari Report, summed up the goal of the vaccine agenda. She said “The want to download a Microsoft Office System into your body, into your brain and hook it up to the Jedi Cloud Contract and the Amazon Cloud Contract at the CIA. And if they can get seven billion people hooked up directly to their cloud contracts and use the virus…I mean it’s very clever. Use viruses to keep those updates coming. It’s the same exact models you use in the computers. Just like Bill Gates made it possible for the intelligence agencies to get a back door into our data and our computers. They want a back door into our minds. They are trying to load an operating system into our bodies. I call it the injection fraud.”