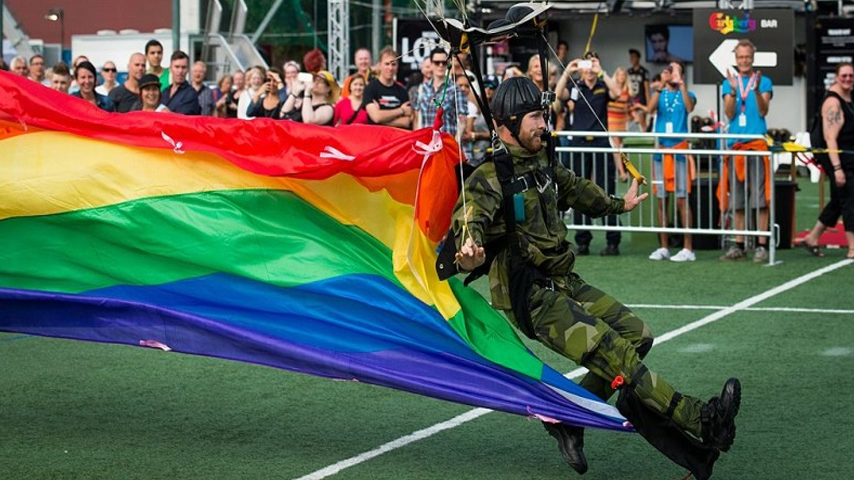 The Swedish military has asserted that supporting gay pride parades is just as important as defending the country from foreign attack.

The Swedish Armed Forces launched a campaign proclaiming gay pride festivals to be “more important than ever” and one of the “core values” of the military in “uncertain times.”

“There are those who claim that the Armed Forces have more important things to focus on right now than waving the Pride flag. Rights are pitted against each other and one wonders what is more important: a strong defense or everyone’s equal worth?” asked the Swedish military in a statement.

“For us, there is no contradiction. The task of the Armed Forces is to defend Sweden, everyone who lives here, our democracy and our rights. Because in the end, no one stands without rights and without protection,” the statement added.

Effectively the Swedish military is saying that promoting gay pride parades is equally as important or even more important than defending Sweden from military attack by a foreign adversary.

Supreme Commander Micael Bydén, who has personally marched in gay pride parades, said one of the primary functions of the armed forces should be to show support for the LGBT movement.

“By participating in Pride, the Armed Forces want to show their tolerance for people’s differences in the country we are supposed to defend. That is why we are part of Pride,” he said.

Respondents to the campaign on Twitter weren’t too impressed.

“One only has to wonder what the military has to do in Pride. Other countries’ militaries are laughing at us. In case of invasion, how should the Pride flag help us?” asked one.

Others pointed out that the LGBT movement is overtly political, and that the military should therefore have no involvement with it, with one respondent labeling the connection “utterly reckless.”

“Pride is a left-wing politicized manifestation that has nothing to do with human rights. The military should not interfere with this. You must stand up for all of Sweden and defend the Swedish colors,” commented one person.

As we highlighted last year, the Church of Sweden published an open letter signed by a long list of priests, deacons, and other church staff, proudly announcing that it is “trans,” whatever that means.

The country is basically already in a state of low-level civil war thanks to rampant violent criminality caused by mass immigration.

But apparently, so long as gays can parade down streets half naked, with full state and military backing, everything is just fine.