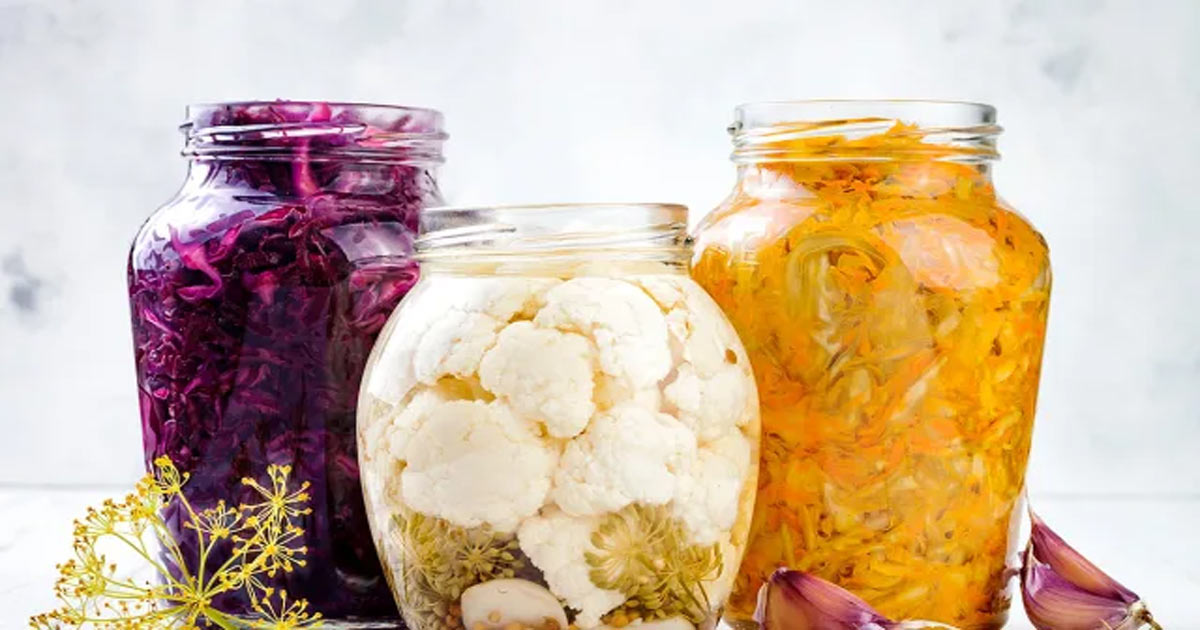 Research confirms what natural health experts have insisted for years:  that the gut microbiome – the community of bacteria in the intestinal tract – plays a vital role in health.  Researchers say imbalances in this microbial community – alternatively known as dysbiosis – can trigger a laundry list of unwanted health conditions, including increased risk of obesity, autism, “leaky gut,” and inflammatory conditions such as arthritis.

Now, a new Stanford School of Medicine study suggests that one simple dietary “tweak” – enriching the diet with fermented foods such as yogurt, fresh sauerkraut, and kimchi – can improve the health and diversity of the microbes (or microbiota) while reducing levels of inflammatory enzymes in the body.  So let’s look at how fermented foods contribute to better health and disease prevention.

In the controlled clinical trial, which was published in July in Cell, 36 healthy adults were randomly assigned to a ten-week diet that included either fermented foods (including yogurt, kefir, fermented cottage cheese, kimchi, and kombucha tea) or high-fiber foods (such as legumes, seeds, nuts, whole grains, vegetables, and fruits).

The findings seemed to take the researchers by surprise.  While scientists and natural health experts have long maintained that a high-fiber diet promotes microbial balance and improves all-around health, the fermented foods-enhanced diet was found to be even more effective in improving the gut microbiome.

The team found that participants in the fermented foods group experienced increased microbial diversity, displaying a greater variety of “friendly” gut bacteria.  At the same time, they showed sharply reduced levels of 19 different inflammatory proteins (such as interleukin-6) linked to rheumatoid arthritis, type 2 diabetes, and chronic stress.  And, the results were dose-dependent, meaning that positive effects increased with larger serving size.

“We expected high fiber to have a more universally beneficial effect and (to) increase microbiota diversity,” said senior research scientist Erica Sonnenburg, Ph.D.  She acknowledged that the data suggested that short-term increases in fiber intake were “insufficient to increase microbial diversity.”

However, the story is a little more complicated than meets the eye.  The results also showed that increasing fiber intake led to more carbohydrates in stool samples, hinting at an incomplete fiber breakdown by gut microbes.  Since earlier research suggested that the microbiomes of people living in industrialized nations are deficient in fiber-degrading microbes, Prof. Sonnenburg hypothesized that a longer-term study might have allowed time for gut bacteria to adapt to the increase in dietary fiber.

Of course, experts say it’s still a wise choice to get plenty of dietary fiber.  Extensive studies have shown that high-fiber diets deliver important health benefits, including helping to lower LDL cholesterol and cutting the risk of certain types of cancer.

The study helped to illustrate the three-way link between dietary changes, gut microbiome balance, and overall health.  The researchers agreed that diet “shapes” the gut microbiome, with low microbiota diversity associated with the soaring incidence of obesity and diabetes.  Noting the “overwhelming” national rise in chronic inflammatory diseases, the team expressed hope that fermented foods could help act against this dangerous phenomenon.

According to the U.S. Centers for Disease Control and Prevention, chronic degenerative diseases, most of which involve inflammation, affect a shocking 60 percent of all American adults.  And these diseases exact a grim toll.  For example, inflammation-driven heart disease is the Number One killer of adults in the U.S., claiming roughly 655,000 American lives a year.  And type 2 diabetes, which has an inflammatory component as well, is currently nearing epidemic levels, with over 34 million Americans currently affected.

Study co-author Justin Sonnenburg, Ph.D., an associate professor of immunology and microbiology, called the findings “stunning” and said that the research provided one of the first examples of how a simple change in diet could “remodel” the gut microbiome.

The team concluded that microbiota-targeted diets, such as diets high in fermented foods, can change immune status, providing a “promising avenue for decreasing inflammation in healthy adults.”

The next order of business is for researchers to examine whether fermented foods can also cut inflammation in patients with existing immune disorders and metabolic diseases.

With so much riding on the health and diversity of the microbiome, the benefits of fermented foods are too significant to be overlooked.  Maybe it’s time to consider adding tasty, nutritious kimchi, yogurt, and kombucha tea to your healthy diet.

“ZOMBIE APOCALYPSE”! Brought to you by the CDC