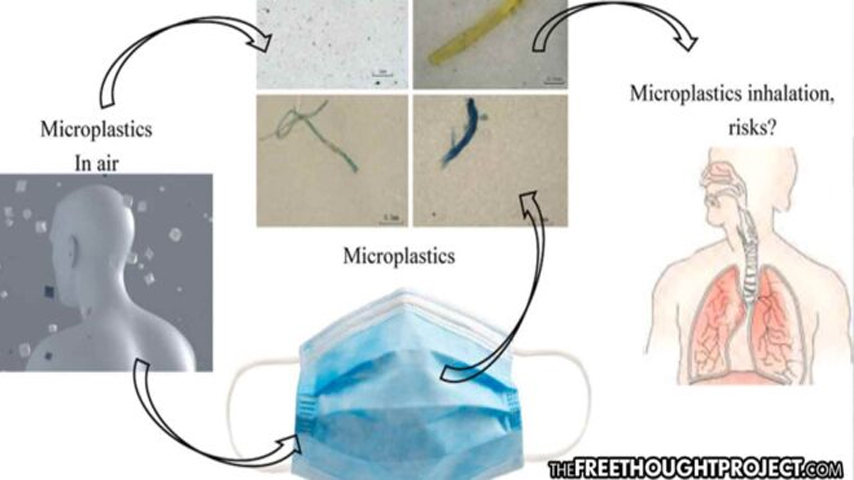 According to a new study published in the Science of the Total Environment, microplastics commonly used in surgical masks have been discovered in the lungs of most people. Though the researchers did not confirm the source of the microplastic contamination, the plastic fibers found in the lungs are commonly used in disposable surgical masks. Billions of people wore polypropylene masks every day for two years and sucked their air through plastic fibers for 8 hours or more. Some states continue to force children to wear masks, which may have catastrophic health impacts on young innocent lives.

Not only are they uncomfortable, make it hard to breathe, and are essentially pointless, but surgical masks worn during the pandemic could have a far unhealthier effect than we all thought. According to a new study published in the Science of the Total Environment, microplastics commonly used in surgical masks have been discovered in the lungs of most people.

Researchers in the United Kingdom looked at lung tissue obtained from study participants and found microplastics in all regions of the lungs, including the deeper section. According to the study, this is the first time microplastics have been found in human lung tissue samples using μFTIR spectroscopy.

The abundance of MPs (microplastics) within samples, significantly above that of blanks, supports human inhalation as a route of environmental exposure. MPs with dimensions as small as 4 μm but also, surprisingly, >2 mm were identified within all lung region samples, with the majority being fibrous and fragmented.

Though the researchers did not confirm the source of the microplastic contamination, the plastic fibers found in the lungs are commonly used in surgical masks.

There were 12 types of microplastic found in samples.

The 4 microplastics present in the most considerable quantities included:

In 2020, the number of disposable face masks littered the environment increased by a staggering 9000 percent. Billions of people strapped polypropylene masks to their faces every day for two years and sucked their air through plastic fibers for 8 hours or more. To not have discovered plastic in lungs would have been surprising.

The confirmation of microplastics in the lungs also backs up a study conducted in 2020 which predicted a microplastic inhalation risk posed by wearing masks.

Dr. Osita Onugha, thoracic surgeon and assistant professor of thoracic surgery at Saint John’s Cancer Institute at Providence Saint John’s Health Center in Santa Monica, California told Medical News Today that the implications for microplastics in the lungs are unknown given our current knowledge of this type of contamination but it can’t be good.

“The real question is what does something within the body […] do? The body does not like things that cause inflammation[…] and things that are foreign [like plastics]. So, if it leads to chronic inflammation, that’s where you can have things that develop years down the road,” Onugha said.

As MNT reports, Dr. Onugha said a follow-up study should address if microplastics within the lungs can lead to inflammatory lung disease or cancer. He added that it should be carried out in a significant population to determine “a cause and effect.”

When researchers do finally determine the source of contamination, it won’t take a genius to figure out that strapping an endless supply of microplastics to the entrance of your lungs increases your chance of breathing them in.

States who continue to force children to wear masks, like New York, would do well to realize the potentially catastrophic health impacts they are having on unsuspecting, innocent lives.