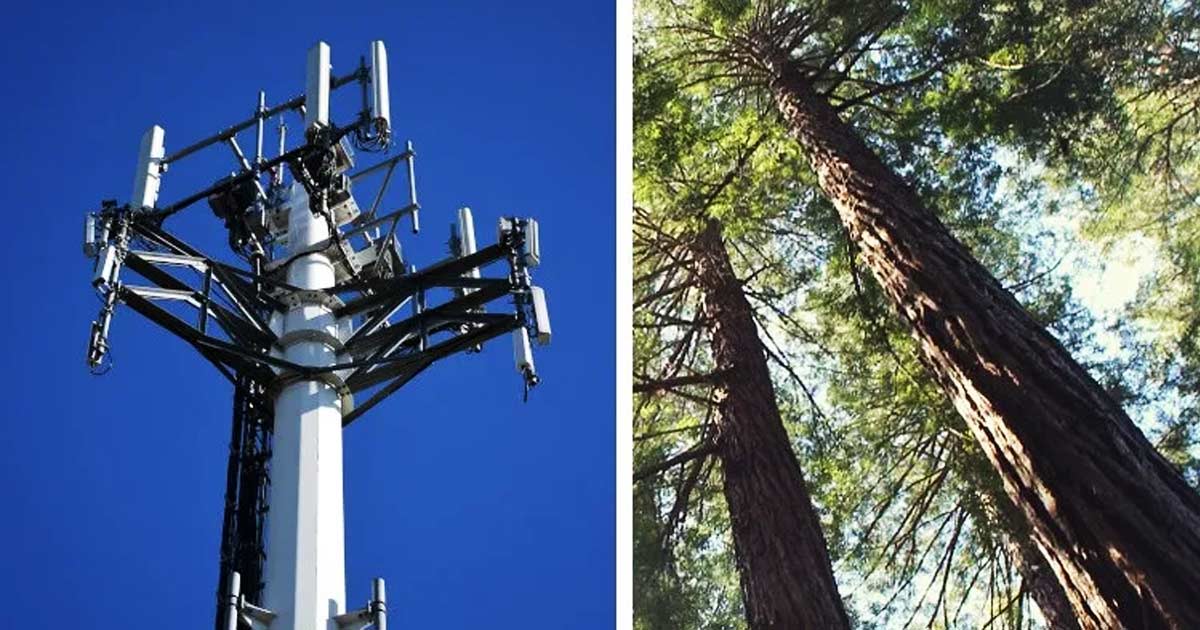 Wireless radiation is ubiquitous in the world today but had only gained widespread use several decades ago. With the quickness in which it has been rolled out and utilized, many people have started to question its long-term impact, both on the environment and our health.

While many exciting changes have occurred as a result of the technology, like wireless internet and cell phones, evidence suggests there may be some serious trade-offs as well.

In a nine-year study on the effect of radiation from cellphone towers on nearby trees, researchers found that the electromagnetic emissions they produce cause ‘high-level damage’ to trees within range of the masts.

The study was conducted in Bamberg and Hallstadt, Germany using over 100 trees. After recording photographic and observational data, along with a measurement of electromagnetic radiation in the area, the scientists found that radiation did cause significant damage to nearby trees.

“This constitutes a danger for trees worldwide,” they researchers say, calling for more “scientific research on trees under the real radio-frequency field conditions.”

Also noted in the study is the fact that natural electromagnetic radiation emitted by the Earth and Sun does not have the same adverse effect as exposure to unnatural radiation, but most scientists seem uninterested in conducting further research on the topic.

“These results are consistent with the fact that damage inflicted on trees by cellphone towers usually start on one side, extending to the whole tree over time.” – Cornelia Waldmann-Selsam, Study Author [SOURCE]

In fact, this isn’t the first study to conclude that wireless radiation has a harmful effect on plant life. In 2010, researchers in the Netherlands conducted a study on the impact of Wi-Fi on deciduous trees and concurred that exposure led to signs of radiation sickness such as “bleeding and fissures in the bark,” and a “lead-like shine” on their leaves.

“In the Netherlands, a whopping 70% of urban trees are suffering from radiation poisoning, up from only 10% five years ago,” Popular Science reports.

In addition to its damaging effect on trees, wireless radiation is shown to cause adverse effects on humans as well. “Oxidative stress, sperm/testicular damage, neuropsychiatric effects including EEG changes, apoptosis, cellular DNA damage, endocrine changes, and calcium overload” are some of the most pernicious results which can arise from excess exposure to Wi-Fi, according to a 2018 paper published in the Environmental Research Journal.

It is important to note that the dangers of wireless radiation are even more pronounced with 5G. While the world waits under lockdown amid fears of Covid-19 making a harsher return, corporations are erecting 5G masts at record pace. Even more shocking, Elon Musk recently acquired the necessary approval to launch up to 42,000 satellites which will blanket the Earth in harmful 5G radiation.

However, making note of the incredible lack of safety testing being conducted prior to the implementation of 5G, Scientific American, the longest-running science journal in America, issued a warning about 5G stating directly in the title, “We Have No Reason to Believe 5G is Safe.”

However, corporations keep rolling out newer and more powerful versions of these dangerous technologies despite evidence showing the harm they cause.

On the effect of wireless radiation on trees, the researchers write:

“The measurements of all trees revealed significant differences between the damaged side facing a phone mast and the opposite side, as well as differences between the exposed side of damaged trees and all other groups of trees in both sides. Thus, we found that side differences in measured values of power flux density corresponded to side differences in damage. The 30 selected trees in low radiation areas… showed no damage. Statistical analysis demonstrated that electromagnetic radiation from mobile phone masts is harmful for trees.”

Concerned scientists and citizens have been sounding the alarm about the dangers that 5G and other wireless radiation pose for many years, but to no avail. As research into the effects of these technologies on our health and environment remain underfunded and sidelined, it may take some time before we can appreciate their true impact.

Phillip Schneider is a student as well as a staff writer and assistant editor for Waking Times. If you would like to see more of his work, you can visit his website, or follow him on the free speech social network Minds.

This article (Studies Show Cell Phone Towers Inflict Significant Damage to Trees and Human Health) as originally created and published by Waking Times and is published here under a Creative Commons license with attribution to Phillip Schneider and WakingTimes.com. It may be re-posted freely with proper attribution, author bio, and this copyright statement.

The Vatican’s Upcoming ‘Health’ Conference? The Devil’s Making Them Do It