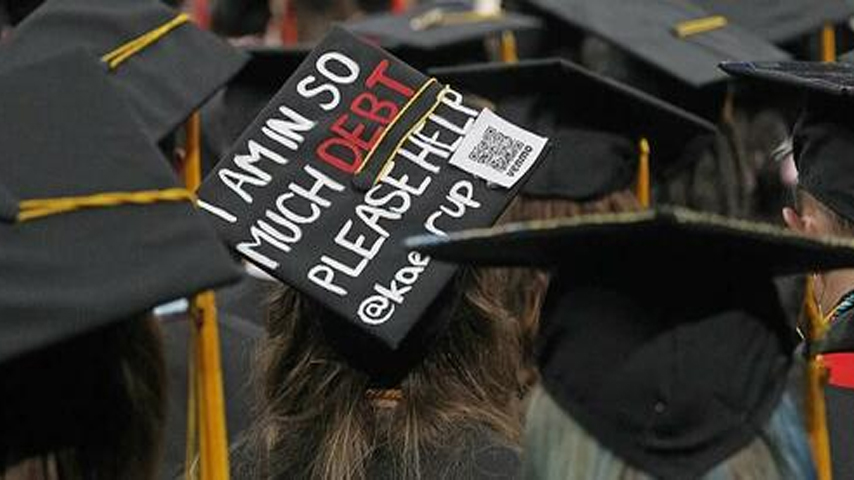 What is a college degree actually worth?  We know what secondary schools charge for the “opportunity” to study with them, but this does not really tell us much about the value of the services they offer.

On average, college tuition costs around $10,000 per year for a person studying in their home state, and $25,000 a year for those studying out of state.  Federal student loans can cover these costs, but this is the application of public tax dollars with the expectation of returns; it is not supposed to be free money.  And to be clear, NO ONE is entitled to secondary education, let alone for free.

The average interest rate on a student loan is around 5% these days, and such loans include stipulations that they cannot be erased through bankruptcy.  The argument among people who support loan forgiveness is that the cost of a degree is too high and the loans are impossible to pay or escape.  On top of that, many of these graduates can’t even get a job once they leave college.

Surveys over the past couple of years show that at least 45% of college graduates are unable to find a job once they enter the private sector.  Those that can find a job usually end up working outside the scope of their field of study.  Keep in mind this is happening during a period of very low official unemployment.

The result?  Four-year or eight-year degree holders end up working side-by-side with high school graduates in lower-wage jobs.  This is extremely common and is fueling a rise in worker discontent.  Their fantasies of six-figure incomes and a life of prestige suddenly hit a wall called reality, and now these students are angry and in debt to the tune of $36,000 or more on average.

But do they have a right to be angry?  No, not really.

As Florida Governor Ron DeSantis recently noted:  “It’s very unfair to have a truck driver have to pay back a loan for somebody that got a Ph.D. in gender studies. That’s not fair. That’s not right.”

This is an accurate assessment.  The loan could have been used for anything – Any field of study with limitless potential for job growth and success, but 45% of these kids chose idiotic majors with zero earning potential.  The money was wasted on nothing, and now, many of these graduates that made foolish decisions are being rewarded for it with loan forgiveness by the Biden Administration.

What’s worse is that these same children now act as if they were “victimized” by receiving the loans in the first place.  No one made them take the loans, and no one made them pick a field of study that was lazy and worthless.  They can’t use the excuse that the jobs market is unfavorable, because according to Joe Biden this is the “best employment environment ever.”

So what is the root disconnect?  What is the question that no one is asking?  Well, if the degrees were worth the cost of the loans then wouldn’t it be easy for graduates to pay them off as high-level producers and money makers?  Why does the federal government need to step in at all?  Shouldn’t graduates be able to pay off their loans with the vast number of jobs available under Joe Biden?  Why would they need the help if the economy is flying?

There are multiple points to make here:

1)  Someone has to pay for the debt that is created, it doesn’t disappear because Joe Biden says so.  It gets added directly to the national debt and the deficit and every taxpayer has to take on that cost, along with the increased drag on the economy.  Why should we pay for the mistakes of a bunch of low-expectation college kids, or for educational services that add no value to the financial system?

2)  Is it legal for Joe Biden to essentially buy votes from college students by offering them free tuition as long as he stays in office?  Isn’t this what he is doing, or is this really Joe giving the kids a break from the goodness of his heart?  Because we all know if Joe can do this successfully once, he will do it again.

3)  Loan forgiveness only confirms what many of us already suspected; that at least half of all degrees are worthless and pointless.  If they were worth something, then there would be no need for forgiveness because the graduates would be able to pay off their loans without aid.

4)  If we accept the fact that half of the student loans are for worthless degrees, then we also have to then ask why they were given out in the first place?  Shouldn’t student loans for necessary fields such as STEM fields or business fields be prioritized and loans for meaningless fields like social sciences be turned down?  Why not only give loans in fields where there are insufficient applicants and high demand for trainees?  Why not incentivize students to take on a field of study that is difficult and needed?  Wouldn’t this be smarter than adding hundreds of billions (potentially trillions) of dollars onto the national debt with the stroke of a pen?

5)  Finally, maybe it is good to make people pay for their mistakes?  Maybe this builds character and forces them to work harder to rectify their lives.  If we subsidize their mistakes, then won’t they simply learn that they can continue doing whatever they please without consequences?  Doesn’t this incentivize stupidity?

Understanding The Tyrannical Mind And How It Operates