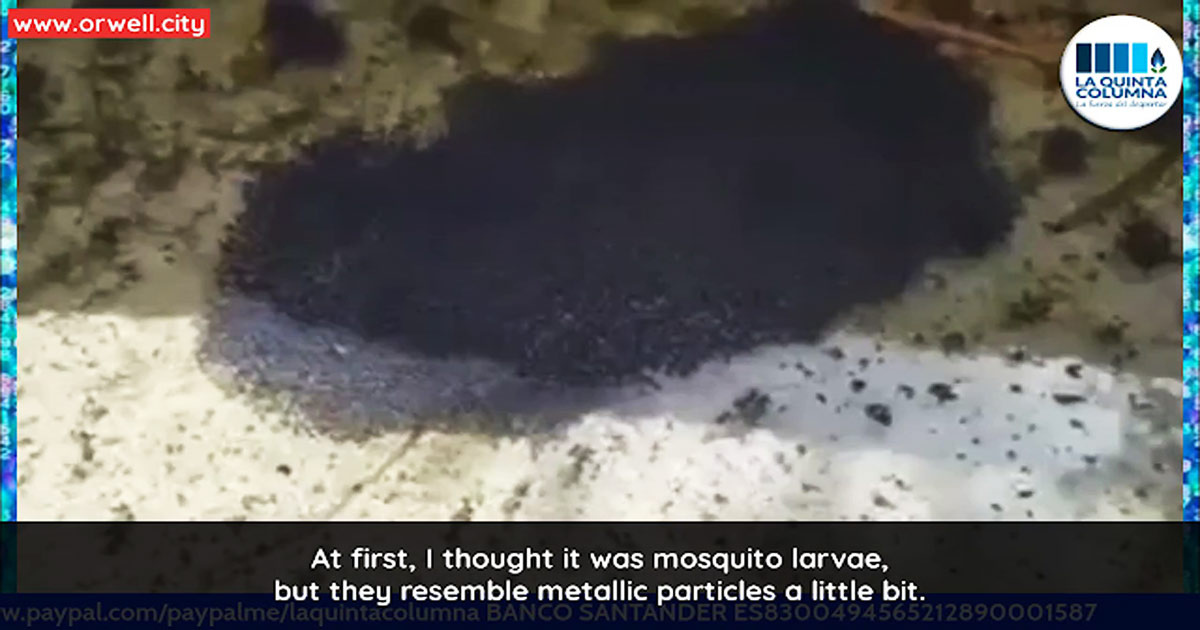 In its most recent program, La Quinta Columna has shown a video in which a blackish metallic type material that tends to clump together can be seen.

Ricardo Delgado: Yes. Look, we’re going to see a very curious video. Anyway, take it with a pinch of salt. It seems to be recorded in France because of the language spoken by the person who recorded it. It’s about a substance that falls from the sky and mysteriously clumps together. Similar or resembling graphene. Let’s take a look at it.

Man: After the rain. After a rainstorm. We had to come back because we couldn’t work anymore. And now we’re seeing this thing that fell from the sky. It’s not mosquito larvae. They just cluster together. They cluster everywhere. At first, I thought it was mosquito larvae, but they resemble metallic particles a little bit.

Dr. Sevillano: What a weird thing to see! Now that’s scary. Now, these are things that can be shocking, but in today’s world, they’re not. We know they’re throwing metallic things out of the sky too. We’ve also seen clouds. Remember those clouds that would form like a smoker’s hoop that would throw wisps into the air. We’ve seen those hoops over the rooftops. We saw two or three videos of those. It wouldn’t be unusual for them to drop these.

Precisely, as an anecdote, I’ll tell you that ten years ago or so, a patient told me that she had seen on the news… News programs here aren’t like the ones in Spain, by the way. Apart from typical ones, there are broadcasts in which people explain strange things that happen in certain places. They always tell anecdotes, like the baker who settles down and, in short, very common things.

Well, in one of the broadcasts, there was a woman in a small town in France saying a morning dawned full of… As if they were blue particles. As if they were plastic. As if they were little balls. And, my friend, the next day someone came to make them disappear with vacuum cleaners and so on. But what they passed through that channel was never talked about again. Someone had gone wrong up there. Airplanes or whatever. And the load went all at once, and it fell in that little town. Maybe, it had to be dropped somewhere else. They have been throwing things up there for a long time. Nobody knows. And nobody gives explanations.

What we have seen in the video… The man who narrates is saying that this isn’t mosquito larvae. That’s, they aren’t things that come from nature. No nests, no clouds of mosquitoes, no nothing. That’s something strange.

We have to tolerate all that because we’re tolerating what they’re doing to us right now. And when I say that this has to be taken down and I insist that those people up there have to be taken down, it’s because they’re putting us in danger. And this is not from yesterday. And it’s not yesterday’s. They have been doing it for a long time. And they will do this and whatever they want if we don’t stop them. One day they spray you with this. Another day they spray you with something else.

And then you see people dying of tumors. You know what the antennas cause us, but they say they don’t cause anything. We cannot tolerate this situation for much, much longer, because they’re going to kill us. Literally.

Thank goodness we have this that has opened a lot of people’s eyes. We now realize how this business, this world works. We now know how. And thanks to them, who have gone overboard trying to intoxicate half the planet with a vaccine. No, not half the planet. Lagarde wants it to be the whole planet. It’s known that this lady is obsessed with being alone here. We probably bother her when she goes to the beach in Saint-Tropez. It bothers her to see people, and she wants to make room for herself.

If you have comments or information for La Quinta Columna, then you can refer to their official website. Follow them on their official channels on Telegram, Instagram, Youtube, and Twitch. If you want to contact them directly, send them a message to: tutoronline@hotmail.es. Don’t worry about the language barrier, they understand English and French.

The Great Reset Will Render All Products As Services, To Implement ‘You Will Own Nothing’ By 2030