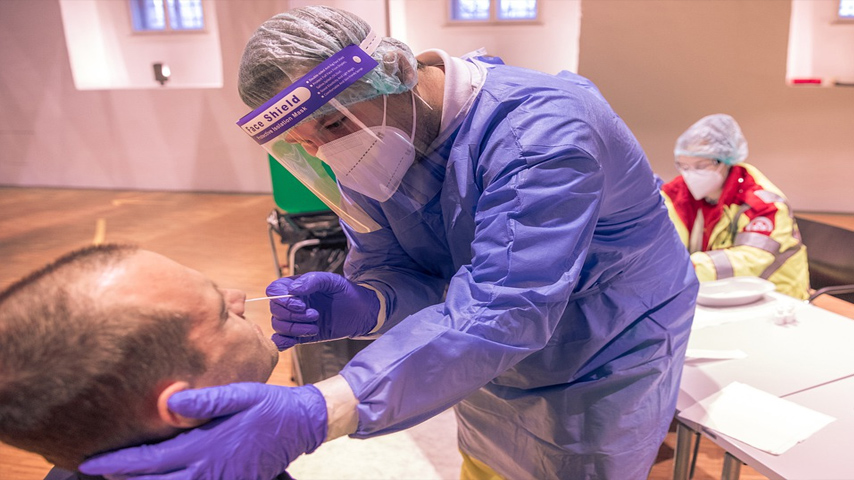 Dr. José Luis Gettor an emergency physician in Spain has warned the population about the damage caused by PCR test swabs.

“Swabs are a weapon. They contain a substance developed by military intelligence called ‘DARPA hydrogel’. And the little tip of the swab isn’t plain cotton. Those swabs come from China. It’s not a plastic stick with a cotton tip. It’s a bundle of hollow nylon fibers that contain, among other things, ethylene oxide.

“Far from making a diagnosis, what they’re doing is much, much harm. So, please, people, stop getting swabbed,” Dr. Gettor warned.

Warnings from the United States

In late April 2021, Natural News published a series of nearly 40 microscope photos showing strange fibers, structures and even “hooks” that are embedded in the fibers of Covid nasal swabs and masks.  Mike Adams explained all the photos and how they were taken, using iodine stains and ultraviolet light in certain cases in his Situation Update video HERE.

Below is an example of one of the 40 microscope photos.  Natural News took a time-lapse photo series and aggregated the photos to reveal strange sparkles coming off the synthetic swab strands when exposed to UV light:

In May 2021 a Slovakian report revealed that “covid tests” are contaminated with nanotech hydrogels and lithium. Lithium is used in the lipid compound coating nanobots which are inserted into the hydrogels for ballistic delivery of biological agents.

Mark Sexton, a retired UK police officer, went public with the Slovakian report knowing full-well that mainstream media would not touch the story. At the time, Sexton also pleaded with the public to take the PCR “test kits” to a local police station and remove the so-called “tests” from circulation at once.

Click on the image below to watch the video on Brand New Tube.

Report from Slovakia: PCR Tests are contaminated and therefore an act of bioterrorism, 18 May 2021 (13 mins)

In October 2021, a union in Cyprus, Isotita, representing the rights of public-sector workers called for the suspension of rapid tests for the coronavirus, after media reports showed a swab contained multiple times the permissible trace level of ethylene oxide.

Citing the European Chemicals Agency, the union said ethylene oxide – a substance used to coat and sterilize PCR and rapid test nasal swabs – is toxic, carcinogenic and mutagenic even when inhaled.

The use of EO is banned in food production in the EU. Under EU Regulation No. 2015/868, the maximum residue level for the sum (of ethylene oxide and the conversion product 2-chloroethanol), referred to as ethylene oxide, has been specified at 0.05 mg/kg.

Isotita’s concerns come after a report aired two days before on the media channel, Pronews TV, about a rapid test swab found to contain 0.36 mg/kg of ethylene oxide.

Warnings from the United Kingdom

More recently, concerns have been expressed by Mike Watson. The Telegram channel for Robin Monotti + Dr. Mike Yeadon + Cory Morningstar shared a post from Watson on 15 January 2022 which reads:

Check the swab packet and you will find letters EO in a black square box.

I work on refineries with “Ethylene Oxide” catalyst reactors and wear full breathing apparatus because it’s a major carcinogen.

One swab in the nose and back of the throat forces EO ppm into your mucus membrane where unknown ppm remains in the body.

However multiple swabs, every few days over time, increases one’s critical ppm exposure levels that exponentially increases cancer risk, from now until one’s immune system naturally deteriorates with age (this goes with any carcinogen we put into our bodies e.g., smoking) BUT EO massively increases cancer risk to all in medical and other industries (jabbed or not) who are forced to test by employers, every 3 days (ca.120 x per year!!) Their PPM exposure level is through the roof.

There is no discernible, empirically measured benefit between a swab up the nose/throat -V- Saliva test to measure the results of an already flawed PCR method.

Exposing billions of people to ever-increasing EO exposure levels by forced swabbing will only show increased cancer levels (hopefully not) between now and 5/10 years. Providing a non-suppressed, global process can be implemented which can accurately follow up, measure, monitor, and record data that is then shared with a decentralized, non-corrupt, “trust less” database management entity. Thinking specifically blockchain!

That said ALARA (as low as reasonably acceptable) shouldn’t really come into it. Should swabs be deemed absolutely necessary (many countries are now abandoning this entire protocol and living with it all) I’d recommend to Senate, should you get another opportunity, that all such tests revert to saliva-based and not nasal/throat swabs, which to most is extremely uncomfortable, extremely stressful and wilfully and unethically inserts a known carcinogen more times than has ever been tested into the bodies of all ages! Why, when saliva works just as well!

Hope this is helpful to all – please forward it to your loved ones.