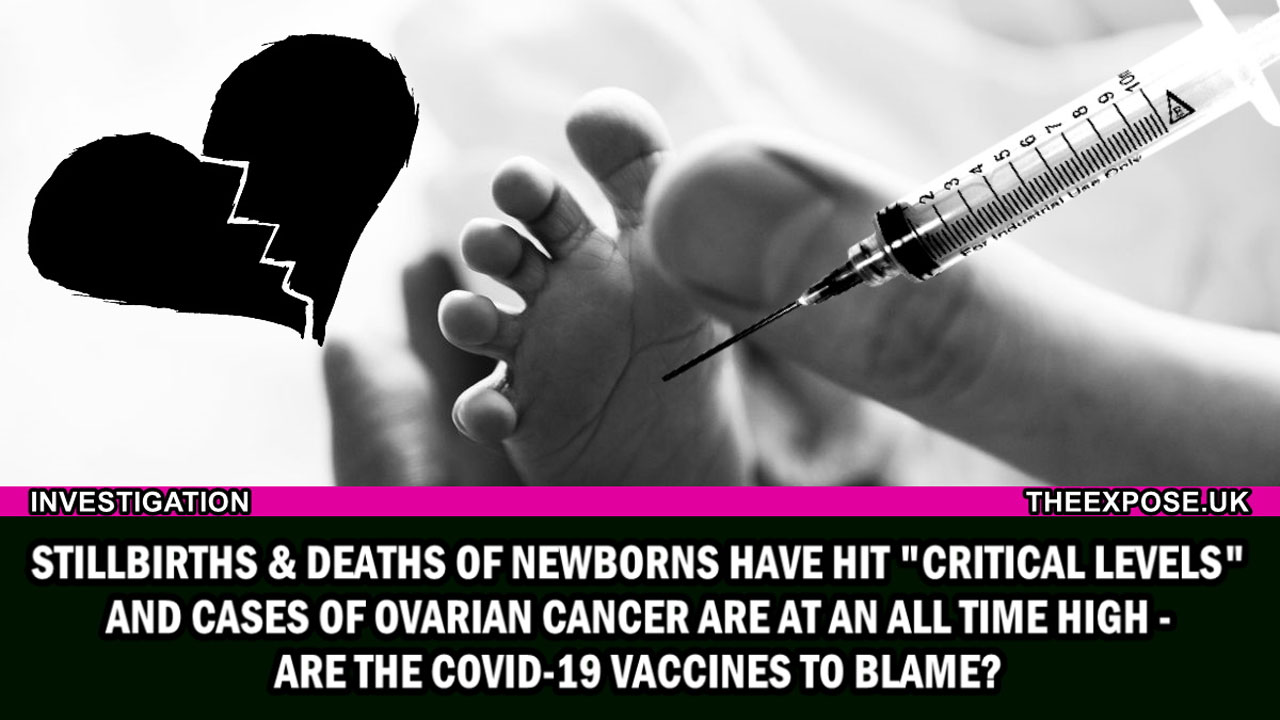 Data available from Public Health Scotland shows that cases of ovarian cancer in 2021 are much higher than the 2017-2019 average, and deaths of newborn babies have reached the upper warning threshold indicating factors beyond random variation may have contributed to the deaths.

Could the rise in ovarian cancer and deaths of newborn babies have anything to do with the mass roll-out of the Covid-19 vaccines?

In December 2020, Dr. Wolfgang Wodarg, a medical doctor/epidemiologist who was a member of the Bundestag (German Federal Parliament) from 1994 to 2009, and Dr. Mike Yeadon, a former vice president of Pfizer; where he spent 16 years as an allergy and respiratory researcher, wrote to the European Medicines Agency requesting an immediate suspension of all SARS-CoV2 vaccine studies due to evidence suggesting the Covid-19 vaccine candidates could trigger an immune reaction against a human protein responsible for the formation of the placenta.

Dr. Wodarg and Dr. Yeadon, both demanded that it must be absolutely ruled out that a vaccine against SARS-CoV-2 could trigger an immune reaction against syncytin-1, as otherwise, infertility of indefinite duration could result in vaccinated women.

Unfortunately, the warnings expressed by both Dr. Wodarg and Yeadon were ignored and the Covid-19 injections have been rolled out to the masses, including to pregnant women, despite no clinical studies being carried out to confirm the safety of their use during pregnancy.

The UK Government clearly stated in the official ‘REG 174 INFORMATION FOR UK HEALTHCARE PROFESSIONALS‘ document prepared upon emergency authorization of the Pfizer mRNA Covid-19 injection that the Pfizer jab was not recommended for use during pregnancy, pregnancy should be ruled out prior to vaccination, and women of childbearing age should avoid pregnancy for at least 2 months after their second dose.

The UK Government also confirmed that it is unknown whether the Pfizer vaccine has an impact on fertility. But despite the Governments own advice clearly stating pregnant women should not be given the Pfizer Covid-19 injection, we know that they were, due to the fact several miscarriages were reported as adverse reactions to the MHRA Yellow Card Scheme from December 9th, 2020 onwards.

But fast forward to April 2021, and despite no scientific studies being conducted to confirm the safety of the use of the Pfizer vaccine during pregnancy, the UK Government decided that all pregnant women should be offered the Pfizer jab upon the recommendation of the Joint Committee of Vaccination and Immunisation (JCVI), who cited that “real-world data from the United States” shows that pregnant women had been vaccinated without any safety concerns being raised.

In July 2021, we exclusively revealed how data had been manipulated by scientists carrying out a real-world study for the CDC to show that Covid-19 vaccines were safe for use during pregnancy.

However, our analysis proved that these numbers were extremely misleading due to the fact that of the 827 completed pregnancies, 700 / 86% of the women had received a dose of either the Pfizer or Moderna Covid-19 vaccine during the third trimester of pregnancy, meaning it was impossible for them to suffer a miscarriage due to the fact they can only occur prior to week 20 of pregnancy.

This meant that just 127 women received either the Pfizer or Moderna Covid-19 vaccine during the first/second trimester, with 104 of the women sadly losing their babies.

Therefore the rate of incidence of miscarriage was 82%, not 12.6% as presented in the findings of the study, and the authors of the study have since admitted that they made a mistake, issuing a correction six months too late because the study has been used to justify Covid-19 vaccination of pregnant women and new mothers around the world.

Another study conducted in Japan, on the Pfizer vaccine titled ‘Pfizer Confidential’, shows that the Covid-19 vaccine accumulates in the ovaries.

In the first 15 minutes following injection of the Pfizer jab, researchers found that the total lipid concentration in the ovaries measured 0.104ml. This then increased to 1.34ml after 1 hour, 2.34ml after 4 hours, and then 12.3ml after 48 hours.

Over 40,000 Menstrual Disorders reported as Adverse Reactions to the Covid-19 Vaccines

Could this explain why nearly 40,000 reports of changes to periods and unexpected vaginal bleeding have been reported to the MHRA Yellow Card scheme as adverse reactions to all available Covid-19 injections?

Up to the 17th November 2021, the MHRA has received 1,724 reports of menstrual disorders, 3,034 menstruation irregularities, 5,068 reports of heavy menstrual bleeding, amongst thousands of others as suspected adverse reactions to the Pfizer Covid-19 vaccine.

In September 2021, Dr. Victoria Male, a lecturer in reproductive immunology for Imperial College London, published an article in the British Medical Journal in which she states that a link between menstrual changes and the Covid-19 vaccination is perfectly plausible and should be investigated.

Dr. Victoria Male concludes in her article that – “One important lesson is that the effects of medical interventions on menstruation should not be an afterthought in future research.

“Clinical trials provide the ideal setting in which to differentiate between menstrual changes caused by interventions from those that occur anyway, but participants are unlikely to report changes to periods unless specifically asked.

“Information about menstrual cycles and another vaginal bleeding should be actively solicited in future clinical trials, including trials of covid-19 vaccines.”

But perhaps more interesting than the article itself is some of the responses that were received to it.

Ovarian Cancer and Neonatal Deaths on the rise

This brings us to the latest data available from Public Health Scotland, on the incidence of cancer and neonatal deaths over the past few years.

Public Health Scotland (PHS) has a full dashboard on Covid-19 wider impacts on the health care system, found here, and it includes a whole range of data from mental health statistics to pregnancies, cardiovascular disorders data, and cancer.

The data available for all types of cancers shows that the total count of individuals suffering from cancer in 2021 is slightly lower than the 2017-2019 average but higher than the numbers recorded in 2020.

However, data for the number of individuals suffering from ovarian cancer shows that the current trend in 2021 is significantly higher than 2020 and the 2017-2019 average.

Further to this, an investigation has been launched into a spike in deaths among newborn babies in Scotland.

Official figures reveal that 21 infants died during September within 28 days of birth, causing the neonatal mortality rate to breach an upper warning threshold known as the ‘control limit’ for the first time in at least four years.

Control and warning limits are designed to flag up to public health teams when neonatal, stillbirth, or other infant deaths are occurring at unexpectedly high or low levels which may not be due to chance.

Although the rate fluctuates month to month, the figure for September – at 4.9 per 1000 live births – is on a par with levels that were last typically seen in the late 1980s.

Public Health Scotland (PHS), which is one of the bodies currently investigating the spike, said the fact that the upper control limit has been exceeded “indicates there is a higher likelihood that there are factors beyond random variation that may have contributed to the number of deaths that occurred”.

Are the Covid-19 Vaccines to blame?

It is of course impossible to definitively conclude that the Covid-19 injections are responsible for a rise in ovarian cancer and neonatal deaths in Scotland.

It’s quite clear that the Covid-19 injections interfere with the reproductive system and further studies and investigation should be carried out with immediate effect.