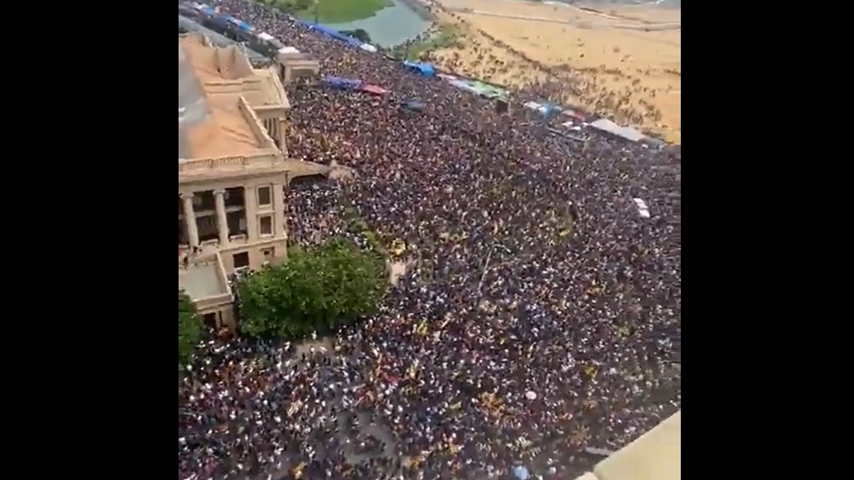 The global food crisis that we are watching unfold is no accident. It was planned out many years ago by globalist entities such as the United Nations, which is waging war on the fertilizer inputs needed to grow food.

It appears as though Sri Lanka is ground zero for this endeavor as the country has been driven to the brink of starvation and collapse by policies from several years back that takes aim at the food supply.

In 2014, the United Nations Environment Programme (UNEP), which describes itself as “the global authority that sets the environmental agenda … and serves as an authoritative advocate for the global environment,” launched an anti-food program called “Economic of Ecosystems and Biodiversity for Agriculture and Food” that urges nations of the world to “steer away from the prevailing focus on per hectare productivity.”

Right now, the world is facing the worst food crisis since 2008, the time of the last market crash. Since the beginning of this year, food insecurity has soared by 25 percent and now affects 345 million people, according to the United Nations World Food Programme.

One would think that in light of all this, the UN would be encouraging nations to increase fertilizer capacity – assuming, of course, that helps people survive is the UN’s goal. Instead, the UN seems to want to starve out as many people as possible by calling for even less food to be produced.

For whatever reason, the UN chose Sri Lanka as the place to launch the current food crisis. UNEP actually held a meeting there back in October 2019 to issue a “road map” for what is now taking place – which is pretty sickening if you really think about it.

The globalists chose Sri Lanka as the place to discuss what they would later do to Sri Lanka, followed by the rest of the world. The goal then and now is to cut the world’s nitrogen “pollution” in half, an endeavor that is also unfolding right now in The Netherlands as government officials order farmers to cull their cattle herds.

UNEP’s acting director in 2019 declared that the reason food production needs to be drastically cut is because of mankind’s “long-term interference with the Earth’s nitrogen balance.” Humans, in other words, have to die in order to save the planet.

One month after that meeting, Sri Lankan voters elected H.E. Gotabaya Rajapaksa as president. An anti-fertilizer president, Rajapaksa declared, without any evidence, that synthetic fertilizers are causing kidney diseases. Two years later in April 2021, he banned all imports of fertilizer.

Two months following the ban, Sri Lanka hosted another globalist meeting, the UN-sponsored “Food System Dialogue” event, that aimed to bring the anti-fertilizer agenda outside of just Sri Lanka and into the rest of the world.

“Sri Lanka’s inaugural Food System Dialogue is part of a series of national and provincial dialogues conducted by the Ministry of Agriculture ahead of the 2021 UN Food System Summit set to take place in New York later this year,” a description of that event reads.

Rajapaksa once again declared that all “chemical fertilizers … lead to adverse health and environmental impacts,” a claim that would quickly be exported as a new policy for The Netherlands and other countries aiming to go “green.”

“My government took the bold step to restrict imports of these harmful substances earlier this year,” he bragged, adding that “changing the mindset of farmers long accustomed to using chemical fertilizer has proven challenging.”

Without chemical fertilizers, it is difficult to grow the overabundant amount of food that the world has gotten used to having ever since the industrial revolution. The world’s population boomed during that time as well, creating dependency on such a system.

Now, efforts to strip away chemical fertilizers are leaving out one major detail: doing so will lead to mass starvation all around the world.

“Rice production fell 20%, prices rose 50 percent, and the nation had to import $450 million worth of the grain. In Rajanganaya, where farmers operate on just a hectare (2.5 acres), of land on average, families reported producing half their normal crop harvest.”

The hardest hit area of Sri Lanka’s food economy is tea, which before the ban generated $1.3 billion in exports and provided 71 percent of the nation’s food imports.

“After the fertilizer ban, tea production crashed 18%, reaching its lowest level in 23 years,” Shellenberger adds. “The government’s devastating ban on fertilizer thus destroyed the ability of Sri Lanka to pay for food, fuel, and service its debt.”

Biden pays farms to STOP – EU out of Feed – Meat taxes & Chicken permits – Up to you to GROW FOOD!