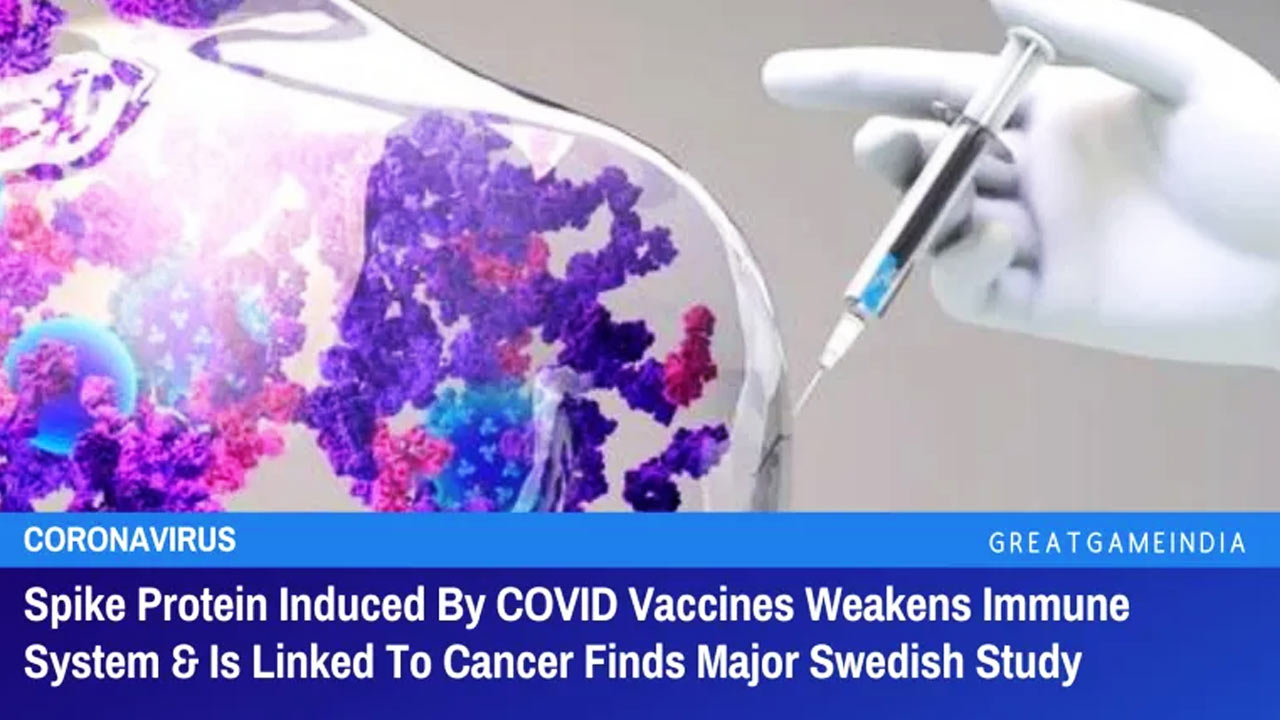 According to a major Swedish study, spike protein induced by COVID vaccines weakens the immune system and may also lead to cancer. The study found that the spike protein localizes in the nucleus and inhibits DNA damage repair.

A Swedish laboratory study (read below) published in mid-October found that spike protein related to the Covid-19 virus and its experimental vaccines penetrated the cell nucleus and severely interferes with damage repair functions of the DNA.

This also compromises an individual’s adaptive immunity and even might lead to the formation of cancer cells.

The study, titled “SARS–CoV–2 Spike Impairs DNA Damage Repair and Inhibits V(D)J Recombination In Vitro,” was published by the Department of Molecular Biosciences at Stockholm University.

This study began with a discussion of the widespread effects of COVID-19 disease in the contemporary world and the need for healthy adaptive immunity so that people can fight SARS-CoV-2 infection.

However, the researchers pointed out that various clinical studies have shown “that patients with severe COVID–19 exhibit delayed and weak adaptive immune responses” for reasons that are unclear.

To provide a reasonable answer to this question, the authors “report that the SARS–CoV–2 spike protein significantly inhibits DNA damage repair, which is required for effective V(D)J recombination in adaptive immunity.”

“Mechanistically, we found that the spike protein localizes in the nucleus and inhibits DNA damage repair,” they wrote. “Our findings reveal a potential molecular mechanism by which the spike protein might impede adaptive immunity and underscore the potential side effects of full-length spike-based vaccines.”

In an online lecture that addressed the study, Dr. Mobeen Syed highlighted how B cells and T cells, which are part of the adaptive immune system, differ significantly in binding to a specific invasive antigen. This “variability is produced by intentionally damaging the DNA [of each cell] and then repairing it.”

In addition, “when our cells are dividing, there are strict mechanisms to make sure that the DNA is correctly repaired and correctly copied and there is no damage otherwise the cell will become a cancer cell,” he said

Two relevant DNA repair mechanisms involve enzymes that are compared to “repair workers” as in that pf nucleus of a cell. “Imagine there are repair workers in our body, in our nucleus, that would rush to the place of a DNA break and go and fix it.”

“Now imagine if these two enzymes cannot do their function. Imagine if they cannot even be produced,” he said. In such a case, when spike and nonstructural proteins are present in the nucleus, “reduced proliferation of the cells occur.”

This means, with regards to our B and T cells alone, “our capability to respond to infections will not be good,” he said.

In an episode of The Highwire, journalist Jeffery Jaxen discusses how these pathogens get into the nucleus, which is particularly worrying.

“The nucleus of the cell is the main control center,” he said. “Nothing should be getting in there, like a spike protein. And even at the beginning when these mRNA vaccines were getting rolled out, we were told the vaccines do not enter the nucleus. We were told they do not alter the DNA. So, this study appears to fly in the face of those statements.”

In addition, Jaxson cites a Swedish study of how researchers analyzed “key checkpoint proteins” in the BRCA1 and 53BP1 regeneration pathways and “found that the spike protein markedly inhibited both BRCA1 and 53BP1 foci formation.”

He described the importance of these genes and said that women who inherit abnormal mutations in BRCA1 “have a much higher lifetime risk of developing breast cancer.”

Secondly, he called 53BP1 “the Guardian of the Genome,” and referred to a 2018 study named “53BP1: A key player of DNA damage response with critical functions in cancer.”

This paper reports, “It has been extensively demonstrated that aberrant expression of 53BP1 contributes to tumor occurrence and development. 53BP1 loss of function in tumor tissues is also related to tumor progression and poor prognosis in human malignancies.”

According to a video leaked by an insider from Facebook, Mark Zuckerberg is seen admitting that COVID-19 vaccines will change your DNA and that he is not sure what would be the long-term effects of these vaccines.

“But I do just want to make sure that I share some caution on this [vaccine] because we just don’t know the long-term side effects of basically modifying people’s DNA and RNA…basically the ability to produce those antibodies and whether that causes other mutations or other risks downstream. So, there’s work on both paths of vaccine development.”

Uptick in Cancer after Vaccination

In March 2021, Dr. Ryan Cole, a certified pathologist, reported autoimmune diseases and cancer have seen a significant “uptick” of Cancer in patients who have been vaccinated against COVID.

“Since January 1, in the laboratory, I’m seeing a 20 times increase of endometrial cancers over what I see on an annual basis,” he said.

In terms of overall adaptive immunity, Cole says that “post-vaccine, what we are seeing is a drop in your killer T-cells” which “keep all other viruses in check”, and this, in turn, makes patients more susceptible to various diseases.

According to Intermountain Healthcare doctors, women who were recently vaccinated for COVID-19 may show symptoms of Breast Cancer as a side-effect of the vaccine.

Summarizing the study’s results and its “suggestion” that was made by the Swedish researchers addressed to their peers within the biomedical industry, Dr. Syed went on to write on his whiteboard, “Do not make full-length spike protein vaccines.”

As per reports, women are experiencing irregular menstruation after getting vaccinated against COVID with more heavier and painful periods.

Six months after the coronavirus vaccines were widely distributed in the United States, the National Institutes of Health (NIH) has called for a $1.67 million study on how the COVID-19 vaccines affect women’s menstrual cycles.

According to March data from the Vaccine Adverse Events Reporting System (VAERS), there were 34 cases reported where pregnant women suffered from spontaneous miscarriages or stillbirths post COVID-19 vaccination.

Read the Swedish study below: