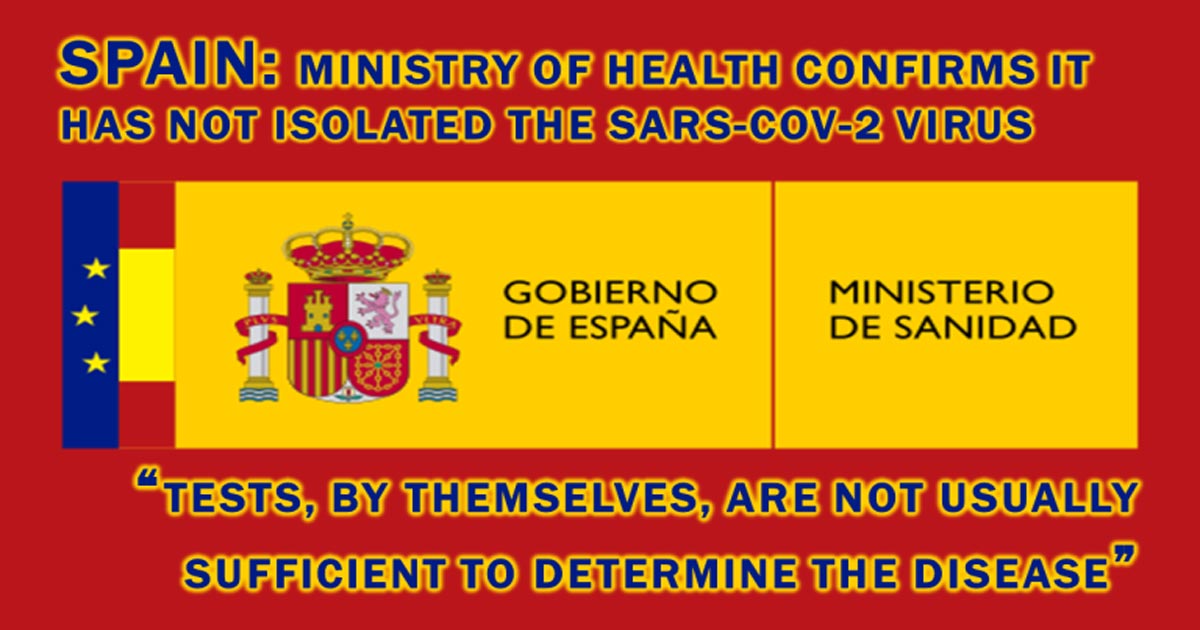 In a response to a request made under the Transparency Act (2013), the Ministry of Health in Spain acknowledged that “it does not have a SARS-CoV-2 culture” nor a “registry of laboratories with culture and isolation capacity for testing.”  The response also discharged all responsibility for diagnoses and treatments onto health professionals and recognized that “tests, by themselves, are not usually sufficient to determine the disease.”

On 30 September, El Diestro reported: “those ‘tests’ which have been used to justify decisions made about confinements, closures, isolations, patient treatments, vaccination and dictatorial measures aimed at ending the freedoms of all, ‘are not usually enough to determine the disease’, according to the Health Ministry.”

In May 2021, we published an article ‘Hundreds of FOI’s reveal that health/science institutions around the world have no record of COVID-19 isolation/purification, anywhere, ever.  At the time the status of requests to Spanish authorities was as below:

On 15 February 2021 Kepa Ormazabal submitted a Freedom of Information request regarding isolation or purification of the phantom “virus” to the Basque Country (Spain) Office of the President and Department of Health and all dependent institutions. Months later Kepa wrote: “According to the law, they have 30 days to respond; 60 if the question is especially complex. Today is May 2nd and I have not heard from them.”

On March 30, 2021, Kepa Ormazabal submitted another FOI request for re-isolation/purification of the phantom “virus” to the flagship of Spanish research, Consejo Superior de Investigaciones Científicas (Higher Council of Scientific Research). Months later Kepa writes: “Again, they have not responded and, therefore, their silence is refusing access to the information they may hold in regards to my question.”

“The CSIC and the Basque government are public institutions and, therefore, must comply with the law of transparency, good governance, and access to public information. Article 20.4 of this law states that, if after 30 days there has been no response from the public administration, this silence is to be understood as meaning that the request to access the public information solicited has been refused.”

Since our previous article, on 22 July 2021, La Asociación Liberum (Liberum Association); Biólogos por la Verdad (Biologists for the Truth); and, an individual made a request to the Spanish Ministry of Health for public information regarding the SARS-CoV-2 virus.  The request, amongst other things, asked for a sample culture of the virus that could be independently tested.

Authorities received the request on 10 August and according to the Transparency Act, the Ministry of Health had one month to respond.  They gave their response, including the above statements, on 8 September 2021 which can be found HERE (Spanish).

We have used Google Translate to translate the Ministry of Health’s full response from Spanish into English and attached it below.

The significant portion of the response from the Ministry of Health is on page three of the PDF document above and is quoted below (using Google translate):

In relation to the SARS-COV-2 diagnostic tests, and in general, with issues related to the SARS-Cov-2 pandemic, the Ministry of Health works with the aforementioned documents, which are updated according to the epidemiological need, to enable decision-making in relation to the management of the pandemic, and the dissemination of information to third parties that can use it in their specific environments. In this sense, the most conceptual and definitional issues remain more in academic and teaching environments, with the Ministry of Health playing a more secondary role and not acting on these issues in its power.

Finally, the evaluation of patients in relation to their state of health, be it COVID-19 or another disease or pathology, is the responsibility of the reference health professionals. The tests, by themselves, are not usually sufficient to determine disease, requiring an expert evaluation of the person who has been tested. Either way, the case definition can be found at the following link: