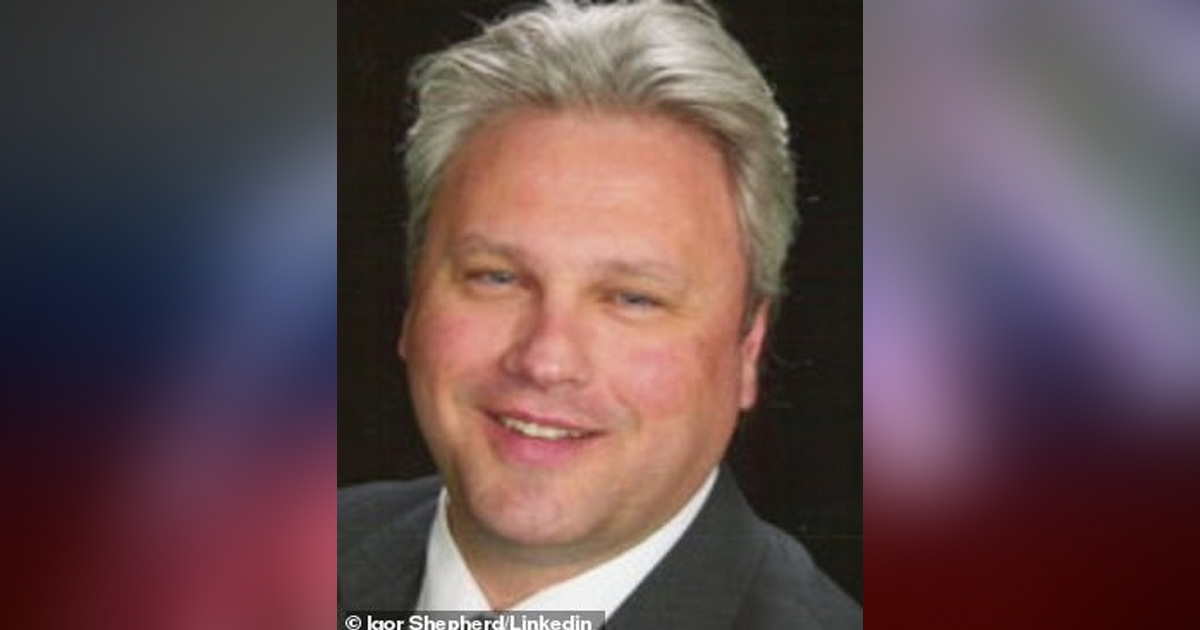 Toxicologist Igor Shepherd, 54 — “I am a Russian military doctor, and lived in Russia under communism until I relocated to America in 1993. During my military service in the Soviet Army, during the late 1980s, my commanders continually pummelled the cadets with Russia’s aim to transform the western world into global communism. Their plans to do this were not through an invasion of war, but through careful infiltration into governments and universities. In March of 2020, as I watched US governors, one by one, forsake scientific medical rationale and proper pandemic response protocol, and shadow communist China’s unrealistic and harsh responses to the new coronavirus outbreak, I knew the infiltration to transform the western world into communism was in full momentum, and that the Covid-19 pandemic was an utter and complete ruse with which to reset the world’s governments and enslave humanity.” – Igor Shepherd [text from his website]

We recently received a link to a courageous talk given by a former Russian citizen in a church in Loveland, Colorado, on 10 November 2020. The talk, which is about 90 minutes long, may be found at https://drive.google.com/file/d/1igLAApM7vkRIZZbmPOTgoUFqsbAoOOlF/view Since it contains a stinging indictment of the betrayal of the American people by their own leaders, it is not likely to remain accessible for very long.

The speaker, Dr. Igor Shepherd, worked for many years in the former Soviet Union as a medical professional specializing in the development of deadly bio-weapons. He knew that this top-secret program was devoted to the advancement of world Communism and would be used one day to destroy the United States. At that time, steeped in Communist ideology, he saw nothing wrong with the murder of a hundred million people. Both he and his colleagues believed it was a small price to pay for the creation of a worldwide Communist utopia. … Dr. Shepherd held a senior position for about seven years with the Department of Public Health in the state of Wyoming but was recently removed pending an investigation into the talk he gave on 10 November. Both he and his wife, June, knew that his career would suffer if he took this step.

As a former KGB officer, having grown up in the Soviet Union and worked closely with the Russian military, he knows that the planned Communist conquest of all nations has been continuously active since the formation of the Soviet Union in 1917. The supposed “fall” of the Soviet Union in 1991 was merely a reorganization of the way it functioned. The same Elite group remained in control throughout. The biographical information on his website (https://www.stopthevaccine.com/) includes the following details about his time in the Soviet Union: “He grew up in the Soviet Union in St. Petersburg, Russia, and graduated from the SM Kirov Military Medical Academy as a military medical doctor of internal medicine. He trained under the Russian Strategic Rocket Force and specialized in military toxicology, infection control, CBRN proliferation, weapons of mass destruction, and nuclear/biological/chemical warfare.”

Trump is a traitor. “Trump participated in the lockdowns and [social] distancing and civil rights violations by ignoring the Supreme law of our land. He instead followed Agenda 2030’s governing rules that put more power of governance onto local jurisdictions. It was a brilliant scheme to dismantle our nation. More proof of Trump’s allegiance to the global order is that he has not done one thing to stop the illegal orders by any of these governors or mayors. Though we hear him rant about the unfairness, we will never see him stop the unfairness. This is because he is on board with the World Economic Forum and Klaus Schwab and other global leaders in pushing forward a New World Order (which includes enforcing unsafe vaccinations onto the population via military force).” – Igor and June Shepherd [text from their website]

Disarming Americans with vaccines. “The vaccines have nothing at all to do with our health, but everything to do with controlling our minds and bodies. They are part of the pre-planned hoax pandemic with which to undermine our way of life in every aspect we can imagine. They will control what we eat, where we go, what we do, and how we think if we do not rise together in unity and push back. They know that as they continue to strip Americans of more freedoms, there will eventually be a huge opposition of armed Americans rising up. …Vaccinating the population rapidly (Operation Warp Speed) … is a brilliant tactic with which to take out hundreds of thousands of citizens without firing one shot. Injecting them with toxic or DNA-altering vaccinations would slowly paralyze the nation and allow for the completion of the New World Order’s Great Reset.” – Igor and June Shepherd [text from their website]

Planned ‘pandemic.‘ “One thing that is certain, UN Agenda 2030 would not have been possible to accomplish this fast and quickly without the Covid-19 pandemic. This pandemic was pre-planned in order to open the portal to the global elites’ decades-long goal to rule the world with an iron fist. There is a Federal German Pandemic Response Document (starting on page 55) put out in 2012 that describes a pandemic scenario almost exactly like we see going on today. The virus in their scenario is named ‘Modi-sars’ (modified coronavirus)… The document is uncanny because it predicts the pandemic will last 2 to 3 years, with… ‘waves’ of the virus, strict responses, food shortages, civil unrest, and societal changes.” – Igor and June Shepherd [text from their website] Note: The Federal German document (in English) may be found at https://matrixhacker.de/pdf/BT-Bericht_Schmelzhochwasser_E

Mask-wearing. “Only tyrants and people who hate humanity would force young children and the elderly to be deprived of the vital oxygen needed to ensure good health. Causing everyone to give up their rights to breathe fresh air is absolutely diabolical and insane. And yet, these madmen running our country are getting away with all of these civil rights violations because the citizens are allowing the travesty without a peep of defiance.” – Igor and June Shepherd [text from their website]

Technocracy. “Technocracy is an ideological system of governance in which those in power (the technocrats) control the masses and run nations through advanced technical knowledge. This is one reason why the 5G wireless technology was important, and rolled out, despite the scientific proof of its health dangers. The lockdowns, business closures, and distancing is part of conditioning to prepare the masses for this type of harshly-regulated lifestyle.” – Igor and June Shepherd [text from their website]

Silent biowarfare. “Because there is no pandemic, and the virus is a hoax, I believe that these vaccines are biological weapons of mass destruction, and will be used to depopulate the world, as well as alter the human genome for other sinister reasons that will benefit their agenda… These Covid-19 vaccines are weapons for a soft kill, like the other numerous toxic drugs put on the market for decades, but much worse because they now have the technology to mess with our original human genome. They will get away with mass murder because if in six months or a year, hundreds of thousands of deaths occur, it can be blamed on “other factors” and not the Covid vaccine. This is the way silent biowarfare works. ” – Igor Shepherd [text from his website]

The Great Reset. “The Great Reset is a planned communist regime-style global government, currently underway (by force) via the pre-planned and hoaxed Covid-19 pandemic. It is a totalitarian global agenda that came into popularity in 1987 through the United Nations. It was titled Agenda 21 because the goal was to completely reset all world governments and economies by the year 2021. Since they are unable to finalize that goal by 2021 and needed to extend their timeline (though they have made massive headway this year, in 2020, using this pandemic), Agenda 21 has been updated to Agenda 2030. This gives them an additional ten years to complete the global takeover.” – Igor Shepherd [text from his website]

Nearly all leaders support the New World Order. “Almost every leader in the world, including President Donald Trump, is behind implementing Agenda 21 / Agenda 2030 / Sustainable Development as a new way of life, or plainly put, as a new way of tyrannical life under their technocratic New World Order.” – Igor and June Shepherd [text from their website]

Depopulation, sterilization, and slow-term genocide. “How can we trust companies manufacturing the Covid-19 vaccines when they support a global agenda which endorses depopulation? How can we be sure they have developed vaccines that are actually safe for us and will not be used for sterility purposes, slow-term genocide, or DNA-altering….?” – Igor and June Shepherd [text from their website]

Bill Gates and the vaccine companies. “Bill Gates, who is behind all of the Covid-19 vaccine companies for the US, was caught hiding sterility hormones HCG in his tetanus shot in Africa and the Philippines, causing infertility in thousands of women. Do you really believe these same people care anything at all about your health? The Covid-19 vaccines are not developed to save your life, but rather to depopulate, change the makeup of humanity through genetic engineering, and control populations.” – Igor and June Shepherd [text from their website]

Austin Fitts – It’s Not a Vaccine; It’s an Operating System

Murder for money: Whistleblower reveals hospitals get PAID for every COVID patient admitted