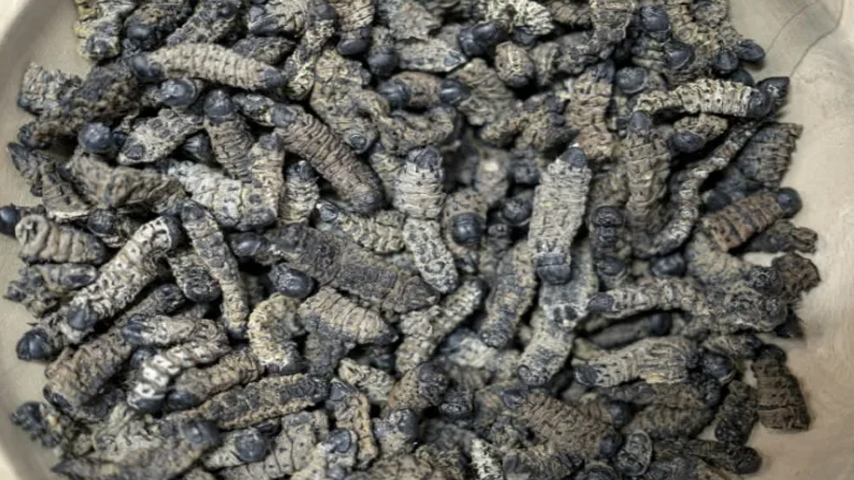 The globalists and freaks in the left-wing media are trying to convince people to eat bugs.

Eating bugs is degrading and that’s why the elitists are pushing them as a “sustainable” source of protein for the peasants.

A South African entrepreneur is innovating new ways of turning ‘mopane worms’ into flour to be used for protein bars and protein smoothies.

Wendy Vesela, the chemical engineer behind the push for people to eat the caterpillars, said the bugs can also be used as pizza toppings.

A start-up entrepreneur from South Africa wants to change the way edible caterpillars popularly known as “mopane worms” are viewed and eaten.

South African chemical engineer Wendy Vesela has found ways of turning the spiky green and black caterpillars — which are packed with protein and iron — into a flour that can be used in savoury biscuits, sweet chocolate protein bars, cereals or smoothies.

The caterpillars are “a healthier option of protein”, she said. And it’s “not a worm. So people have just to get over that fear.”

“I won’t eat a worm. I’m sorry, it’s disgusting. But if you give it to me in the form of a chocolate… it’s really delicious,” said Gail Odendaal, 38, walking away with a bag of protein bars.

Mopanes are environmentally friendly, too, requiring no extra water or land, as they breed and feed on mopane trees, which grow in hot and dry regions of southern Africa.

They are a better source of protein than many other foods on the market, said dietitian, Mpho Tshukudu.

“It’s high in protein, in essential fats and minerals, especially iron. It has more iron than the most expensive piece of steak,” she said.

Last year the World Economic Forum promoted the EU’s new plan to use mealworms in food in their bid to reduce meat consumption.

The globalists are pushing for the peasants to eat bugs, weeds and synthetic ‘meat’ because bugs “consume fewer resources than traditional livestock.”

“Livestock around the world is responsible for around 14.5% of all greenhouse gas emissions relating to human activity. The need for land – whether for grazing animals or growing crops to feed animals – is “the single greatest driver of deforestation, with major consequences for biodiversity loss,” the paper says.

The European Union will be using mealworms, eaten whole, or in powder form in food.

“The European Union (EU) has ruled that the larval stage of the Tenebrio Molitor beetle, the mealworm, is safe for people to eat and it will shortly be on the market as a “novel food” the WEF said.

WEF article from 2016 says it all: “Welcome To 2030: I Own Nothing, Have No Privacy And Life Has Never Been Better”

Clot shot warning: Here’s what a blood clot looks like when LIQUID blood turns into a semi-solid gelatinous mass inside your body