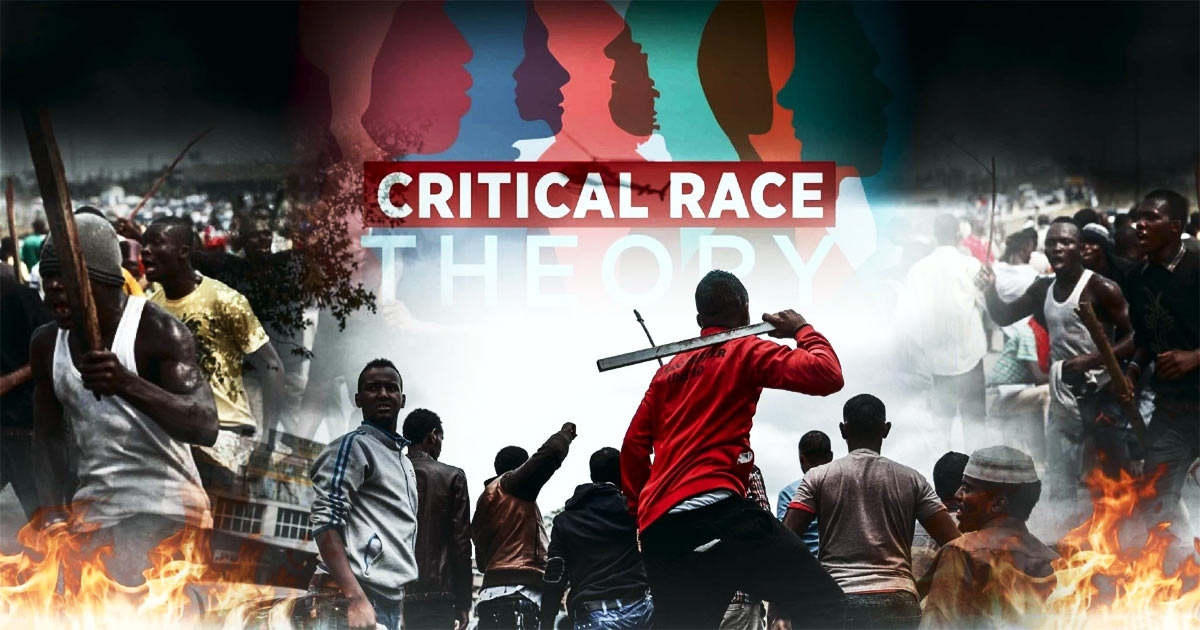 After the jailing of Jacob Zuma, supporters of the former president took to the streets, ostensibly to protest but actually to simply plunder at will. The official death toll already runs into the dozens, but in a country, as violent as South Africa (57 murders a day) the real toll will likely never be known for certain.

JUST IN – At least 72 people have been killed, hundreds arrested, and countless properties looted so far in spiraling unrest in South Africa triggered by the jailing of former president Jacob Zuma.pic.twitter.com/9HNgZBotCz

Rioters have plundered shops and entire shopping malls. When they run out out of normal goods, they steal livestock. When it’s too heavy to carry by hand, they bring a forklift.

The meltdown in South Africa isn’t a natural disaster or a random fluke. It’s a choice. South Africa was the first modern nation to be refounded on the anti-white principles of critical race theory, and now it is reaping the whirlwind of that choice.

South Africa did everything that is being done in America right now. As a hyperdiverse multiethnic, multilingual society, South Africa has followed almost every prescription embraced by the globalist ruling class.

This is about more than riots. This wave of violence will eventually peter out. But there is no reason to be optimistic when that happens. There will be no sense of having survived a calamity and having a chance to rebuild. When this wave of burning and looting and killing is over, there is nothing to look forward to but the next wave.

The specter of doom hangs over South Africa. The optimism that peaked when the country hosted the 2010 World Cup is now gone. Despite being warned for years about failing water infrastructure, local governments ignored the problem and now the country has routine, severe water crises. South Africa began experiencing rolling blackouts in 2007 and has battled them ever since. Even the government says the blackouts will likely continue for at least five more years. Hint: Bet your money that they last even longer.

Despite being the “economic superpower” of Sub-Saharan Africa, South Africa’s brain drain is significant and accelerating. Those who have options are abandoning the country.  More than four percent of all deaths are murders, and the murder rate is somehow still rising; last year it rose by 8.4 percent. But it’s not just about day-to-day violence. It’s the expectation for what is to come.

South Africa’s dominant African National Congress party is corrupt and ineffective, but its most dangerous rival is one of the most radical political parties to enjoy representation on Earth. The Economic Freedom Fighters vow to seize white-owned land (without payment), nationalize the banking and mining sectors, and double welfare payments.

But EFF isn’t a radical outlier in South African politics. It’s the natural endgame for the country’s post-apartheid ideology. For decades, the South African economy has been shaped by a policy known as Broad-Based Black Economic Employment. Despite its name, there is nothing “based” on BBBEE. Instead, the policy uses the same tactics to achieve “equity” that activists in the United States are demanding.

BBBEE relies openly and explicitly on injecting racial preferences throughout the economy. Companies receive a BBBEE scorecard based on hiring black workers, elevating black management, and giving black South Africans a share of ownership. Companies with high BBBEE scores are given favorable tax treatment and preferences in government contracts. Corporate actors are strongly incentivized to give contracts to high BBBEE scorers as well.

The results are predictable. Remember those rolling blackouts Revolver mentioned above? Eskom, South Africa’s public electric utility company, is one of the most aggressive adopters of BBBEE. South African National Assemblywoman Gwen Ngwenya described the outcome of this approach in a 2019 column:

Why is Eskom in trouble? Because it has high operating costs and it cannot meet its debt obligations. Why? It’s ambitious programme to build two big power stations has incurred substantial cost overruns and technical faults. Why? In part it was flawed from the beginning with a small bidding pool, meaning it was likely not cost competitive from the start. Why? There was political meddling. Why? Chancellor House. Why? Contractors needed to have a black partner in order to secure contracts. Why? BEE. [PoliticsWeb.za]

In her column, Ngwenya explains how BBBEE has fueled the decay of South Africa’s power utility at every step of the process. The country has two expensive, botched power plants because Hitachi’s African subsidiary secured contracts based on black empowerment criteria rather than actual expertise. Eskom has problems with coal supply because it gave favoritism to black-owned mining companies, and even pushed foreign firms to divest from the country. In one case, the CEO of Wescoal resigned his position solely because having a white CEO hindered the company’s ability to compete in South Africa.

But most damaging of all, BBBEE has driven a catastrophic dilution of Eskom’s core human capital.

Eskom has experienced a skills carnage for many years, and the long spectre of race-based policies has never been far from the crime scene.

A decade after the skills shortages plaguing Eskom at the time of the 2008 financial crisis, it still cites ‘people issues’ as one of its major concerns. This is startling for a company where the staff complement has increased by almost 50% in the last 10 years. As recently as 2015 Eskom was talking about reducing the number of white engineers by 1,081 and white artisans by 2,179 in professional and mid-management positions in order that the utility could more accurately resemble the demographics of the country.

Estimates vary but Eskom has lost thousands of skilled personnel since 1994, and often paid a premium for it via costly severance packages. Many were taken up by individuals who could smell the blood in the water and for whom retirement or employment abroad presented a more attractive offer than sticking around for the looming apocalypse. [PoliticsWeb.za]

As time passes, the situation only gets bleaker for Eskom. The company’s infrastructure is aged and failing. Its workforce is unskilled or outright incompetent. Thanks to racially motivated contracting, its logistics are breaking down.

But there is more going on than skills decay rooted in racial discrimination. Just like in the United States, rampant affirmative action is an invitation to naked cronyism, insider dealing, and corruption. Burdensome racial quota laws fall heaviest on small and up-and-coming businesses, while the largest mega-corporations have the easiest time complying. If a company is to be politically rewarded for handing out ownership based on race, why not gain even more security and let the politically connected into the ownership caste? If you have to hire unqualified hacks for senior management, why not give the jobs to politicians’ children? Corrupt behavior like this happens even in the best systems. But as one South African observer notes, in that country it’s by design:

Across state in-house institutions like the South African Revenue Service, the National Prosecuting Authority and the National Intelligence Agency, black-first narratives were used to effect ‘state capture’ which meant shielding those corrupt rent-seekers (black and white) who used BEE deals, slush-funds and tax dodging to fizz their champagne while flattening the rest of us.

In the private sector, BEE is one of many onerous costs of business that the biggest, well-established firms can bear while their up-and-coming competition is hounded off the grid or else simply bankrupted. This creates a winner-take-all economy while the sum of it all shrinks. The Small Business Project’s (SBP) landmark new analysis finds that contrary to former expectations there are not millions of formal Small and Medium Enterprises (SMEs) but only about 250 000. It also notes that formal SMEs ‘only account for 28% of the jobs’ while, ‘based on international trends, this should be about 60% or 70%’. [South African Institute of Race Relations]

As the country has broken down, race hate against white people isn’t used to reduce inequality but to increase it — much like in America. One of South Africa’s richest families is the Gupta family; Indian immigrants who arrived in 1993 to profit off the end of apartheid. The Guptas soon built a close relationship with the now-jailed Jacob Zuma. When Zuma became president, his actions benefited the Guptas to such a degree that it constituted state capture.

According to testimony heard at the inquiry, the Guptas went to great lengths to influence their most important client, the South African state.

Public officials responsible for various state bodies say they were directly instructed by the Guptas to take decisions that would advance the brothers’ business interests.

It is alleged that compliance was rewarded with money and promotion, while disobedience was punished with dismissal.

The public bodies that are said to have been “captured” in this fashion included the ministries of finance, natural resources and public enterprise, as well as the government agencies responsible for tax collection and communications, the state broadcaster SABC, the national carrier, South African Airways, the state-owned rail-freight operator Transnet and the energy giant Eskom, one of the world’s largest utility companies. [BBC]

Crucially, when political heat was directed toward the Gupta family, they knew exactly how to fight back: Point the finger at society’s most acceptable target, white people. The Guptas employed a British PR firm to argue that South Africa’s problem wasn’t a corrupt family dynasty, but the white race hoarding resources from everyone else:

According to an investigation by the Sunday Times last month, Bell Pottinger took on the Gupta family as clients in 2016 to try to improve their image, and the chosen strategy was to target white business leaders as a distraction from serious allegations of state capture.

One of the strategies was apparently to drive a predominantly social media narrative that “white monopoly capital”, the SA Communist Party and National Treasury have been standing in the way of transforming the South African economy.

The phrase “white monopoly capital” has, over past months, become a major feature of mainstream political discourse, with even President Jacob Zuma using it.

The paper said it had seen evidence of the PR plan (presumably including the document above) involving Andile Mngxitama and his Black First Land First Organisation, Mzwanele Manyi and his Decolonisation Foundation, and others.

The Bell Pottinger plan reportedly involved using, among other things, Twitter bots involved in a fake news campaign to support messages critical of white monopoly capital and be defensive of the Guptas. [The Citizen]

To get an idea of what ideologies the Guptas were enabling with their campaign, here is an interview with a member of Black First Land First, one of the radical organizations promoted by Bell Pottinger’s scheme:


Black First Land First remains a marginal political party, but one party that isn’t marginal is the Economic Freedom Fighters, South Africa’s third-largest party. Even after the exposure of the Gupta family’s methods, the party’s leader embraced the racial attack on South Africa’s white minority.

“I know president Mbeki, you’re fighting your own factional battles. But when you fight your battles, don’t distort the truth. Whites are monopolising our economy,” he said.

He said that’s one reason why they don’t want to invest their money into the country’s economy through industrialisation “because they don’t trust South Africa’s democracy”.

“There is white dominance and control of our economy. Today when you remove the ownership by pension fund from the stock exchange, the remaining 90% belongs to white families,” he said, before asking “who owns the land, factories and monopoly industries in the country”? [News24]

Malema has also infamously declared that his party is not calling for the murder of white people, “at least for now,” a comment that was declared to not be hate speech by South Africa’s human rights commission.