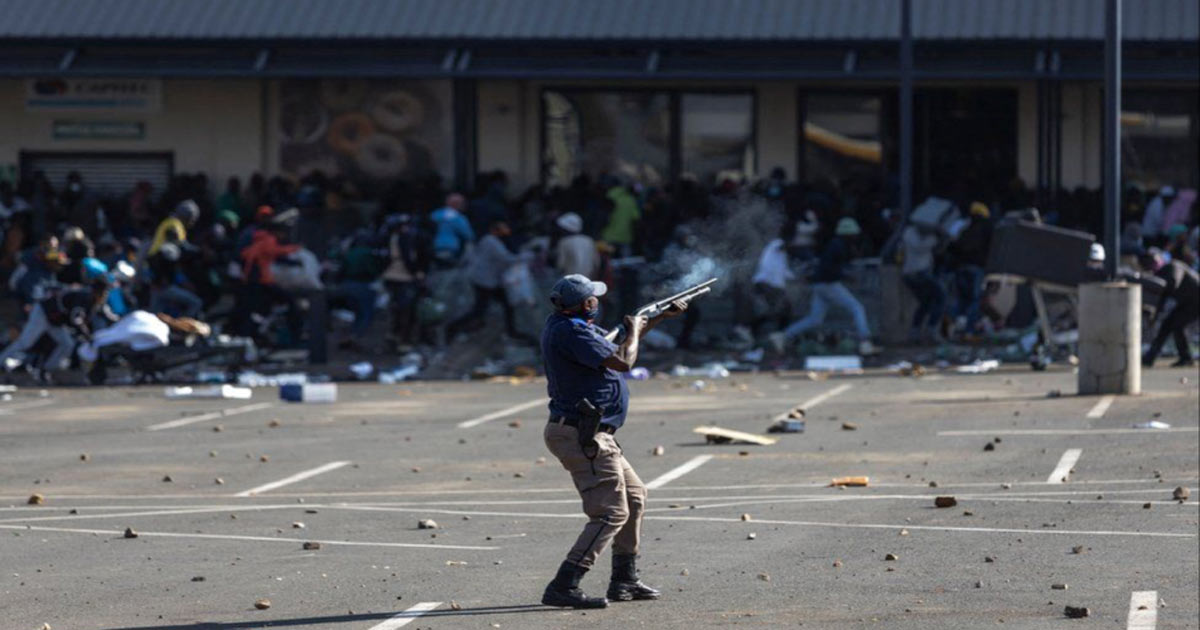 A video was just sent to me depicting the actual scenes and truth unfolding in South Africa …   it is beyond imaginable, it is beyond comprehension, it is far, far beyond Nazi Germany.  It is the unfolding of what is described as coordinated decimation of an entire country into abject uncontrolled chaos thru mass hysteria and a mob mentality.  Pictures and video streams are tenfold what we see in such cities as Portland or Minneapolis wherein law no longer exists and a reign of terror beyond imagination has taken hold.

There is no economy left. At all.   And while our defunct MSM would give little air time to this reign of terror, it would appear to be the exact same playbook for Minneapolis and Portland. As though the same plotters stoking black insidious destruction here and there are providing us a vision of what will become our reality everywhere.

While the video does not speculate on who is behind this stoked invasion, SerpentZA states that bussing in 3000 looters at a time is always a part of the orchestrated agenda.   These militias are tasked with death by machete and stoking mob mentality chaos. There are few consequences, the police are corrupted, and food is the focus as there will soon be nothing to replenish the decimated shelves.

Food and Water are finite.

As the White House shuttles illegals via military planes throughout the US, it stands to reason these militant males will be trained in operative tactics, armed to the teeth, and given a mission to instigate this same orchestrated terror throughout the suburban areas of the US. Immunity will be secured. While it is unknown how many have been brought in by our military, estimates vary widely from 800 to thousands.

The man narrating in the video grew up in South Africa and after 25 years fled to China. Yes, China.

South African, Lindsay Maasdorp, is the Black Land First (BLF) spokesperson.   The organization was founded in 2015 and is the African version of BLM. In November 2020, shortly after the US Election, BLF was granted registration as a political party. It is Marxist/Leninist, corrupt, and embedded in death to all white people.   Maasdorp revealed the extent of his hatred when he stated that he would support a rapist as long as the victim was white and the rapist was black. His party believes that all white people in South Africa are criminals by virtue of their existence.

Ex-President, Zuma, was an avid supporter of BLF which was funded by the Gupta family.   The Gupta family migrated to South Africa in 1993 and became the defacto shadow government accumulating vast wealth through the mining of gold, platinum, coal, diamonds, etc… while giving kickbacks and bribes to Zuma and his ‘associates’.

In 2013, the family gained international notoriety for a planned 4-day wedding in South Africa which was attended by Hillary and her close companion, Huma Abedin.

The Gupta family and their various streamed companies were heavy donors to the Clinton Foundation and have extensive ties with Dubai. Two Gupta’s emigrated to Texas and were subsequently ‘sanctioned’ for inappropriate business transactions that also named the UK-based PR firm, Bell Pottinger.

Bell Pottinger filed for bankruptcy as a result of the scandal wherein it was revealed they had created troll Twitter accounts to stoke racial division in South Africa.

A number of international banks have allegedly been identified as facilitating the corruption under Zuma, including HSBC, Standard Chartered, and India’s Bank of Baroda.

The MSM continues to provide a jumbling, mumbling bumbling narrative that barely scrapes the surface of anything remotely close to actual journalism.   The former President Zuma’s current incarceration as he awaits his corruption trial is said to have initiated the riots.   But that would be the distraction, like Floyd, or any other black martyr our CIA touts.

People don’t riot on behalf of an imprisoned official by looting, fire, murder, and destruction that destroys their city, livelihoods, and businesses.   How does it benefit Zuma when these people are enveloped in their own starvation as a direct result of their actions?   Like every other protest that had a cause, South Africa was infiltrated.

Current President, Ramaphosa, has stated that the aim of the unnamed backers who organized the riots was the destabilization of the economy. Supply routes have been targeted and there are mass shortages of goods including – food, medicine, and oil.

The resemblance to US riots is on point.

The Gateway Pundit posted a short video taken at the Del Rio border gate which shows upwards of 300 illegals demanding entry, the vast majority are black males.   The magnitude of illegals coming to the US border in 2021 is sheer madness provoked by Biden’s open border, amnesty for all, costly accommodations, free food, free free free!!

But they are a necessary component for militia training by our now defunct, purged of honor, military.  And their mission will be – destabilization in the US.

However, on cue, Black Lives Matter has come out supporting the Communist President in Cuba just as the protests turned violent. Who is behind the recent violence in Cuba?   Operatives.   Hired.   Just like the stoked riots in South Africa supported by the pro-Gupta/Zuma regime affiliation BLF.   Just like the stoked riots in Seattle, Minneapolis, Portland, etc…  Mob Mentality – the psychology that is the basis for nearly ALL violent riots we witness across the globe.   Stoked. Driven by and empowered by an emotional response instead of a rational one.

When will we rise up and say enough is enough