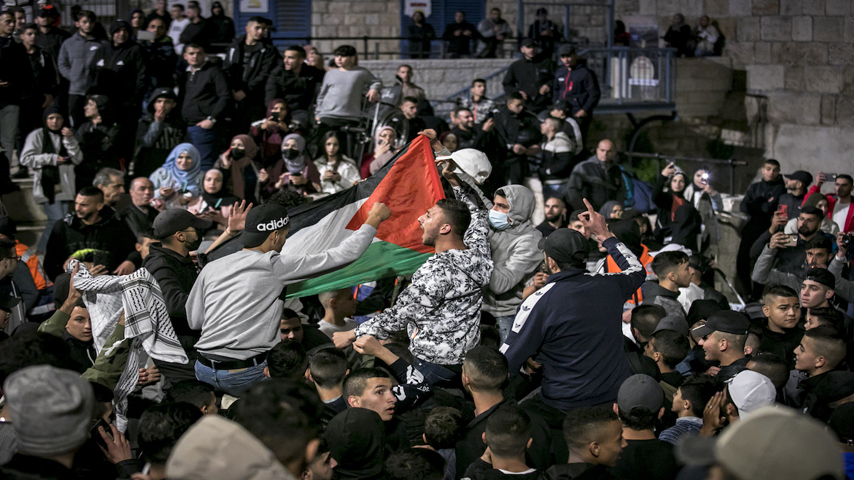 Arabs gather and wave a Palestinian flag at the Damascus Gate in Jerusalem’s Old City, during the holy Muslim month of Ramadan, April 26, 2021. (Photo: Olivier Fitoussi/Flash90)

Are the recent terror attacks by Palestinians being driven by Islamic prophecies that predict Israel’s imminent downfall?

Palestinian social media is apparently abuzz with anticipation that Israel will cease to exist during this year’s month of Ramadan, which begins this weekend. These predictions are based on a few different sources.

Mohammad Makram Balawi, a Palestinian writer and academic based in Istanbul and president of Asia Middle East Forum, pointed to a few of these in an article in Middle East Monitor.

“For many Palestinians, 2022 is a very special year as it marks the beginning of the ‘downfall’ of the Israeli occupation,” Balawi wrote in February. “This belief is widely spread by some Muslim religious scholars, Palestinian and non-Palestinian, especially the well-known Sheikh Bassaam Jarrār. Jarrār delivers his speeches at a local mosque in the outskirts of Ramallah in the West Bank.”

Jarrār’s claims, Balawi said, were not made as a certainty, but estimated as 97% certain based on his deciphering of the Quran’s foretelling of “the liberation of Palestine and the end of Israel.”

“His theory is, indeed, not new. He started voicing his ideas in the nineties, based on an old mathematical calculation system known as Hisāb al-Jummal, which is thousands of years old. It is a numerical system used by Arabs before the Prophet Muhammad (PBUH) and known by other civilisations and religions, including Judaism,” Balawi said.

“According to a specialised website: ‘The Abjad numerals, also called Hisāb al-Jummal, are a decimal alphabetic numeral system/alphanumeric code, in which the 28 letters of the Arabic alphabet are assigned numerical values,’ better known in English as Arabic Geometric Numerology. According to Jarrār’s calculations, based on many Quranic texts, 2022 represents the actual beginning of Israel’s downfall. On 5 March, 2022, according to Jarrār, a huge event will mark the beginning of the ‘Israeli downfall.’ How it will happen is not yet clear.”

The Jewish Press ran an article this week about Jarrār’s 1997 book titled, “Israel’s Disappearance in 2022 – Quran Prophecy or Numerical Coincidence.”

“Jarrār draws his conclusions based on an examination of the number 19 – a significant number in Islam – and its duplications in verses and words in the Qur’an, he also links these conclusions with a ‘legend or prophecy’ attributed to a Jewish old woman according to which the State of Israel will exist for 76 years (19×4).”

Hamas founder and spiritual leader Ahmad Yassin – assassinated by Israel in 2004 – made a similar prediction that “in the first 25 of the 21st century, the balance of power will shift to the benefit of the Palestinian people and the Arab and Islamic nation, and this will lead to the victory and final disappearance of the ‘Hebrew state.’”

Balawi also noted the seven reasons that a Muslim scholar from Iraq, Sheikh Mohammed Ahmed Al-Rashed, presented for Israel’s collapse in 2022 one of which is based on a story told by a Jewish woman who was his neighbor in Baghdad. He said he told her that once Israel became a state, it would last only 76 years.

Other predictions listed in the Jewish Press included Hamas Interior Minister Fathi Hamad saying in 2014 that the Palestinians will liberate all of Palestine “within eight years” and a Lebanese imam, Maher Hamoud, saying in 2015 that “according to calculations based on the Quran the end of Israel will be in 2022.”

Balawi speculated in his article last month “how these prophecies might affect the attitudes and behaviors of the people who believe in them.”

“Yet, we will find many in the traumatized Arab world who would wait for them to come true,” he concluded.

End Times Prophecy: Destruction of America at the hands of Russia (Must Watch)

The Final Countdown To The Psalm 83 War, Jeremiah 49 And Isaiah 17 The Destruction Of Damascus!