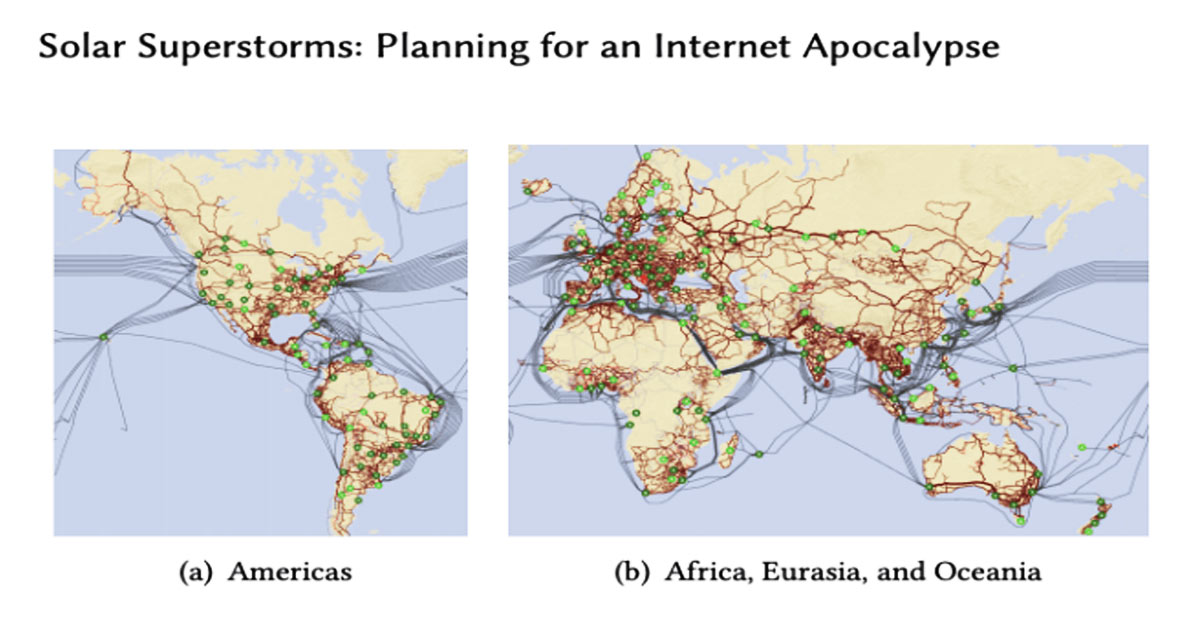 Solar Superstorms: Planning for an internet apocalypse. Map via UCS.ICS.EDU

Scientists have known for decades that an extreme solar storm, or coronal mass ejection, could damage electrical grids and potentially cause prolonged blackouts. The repercussions would be felt everywhere from global supply chains and transportation to internet and GPS access.

Less examined until now, though, is the impact such a solar emission could have on internet infrastructure specifically.

New research entitled ‘Solar Superstorms: Planning for an Internet Apocalypse’ shows that the failures could be catastrophic, particularly for the undersea cables that underpin the global internet.

Abdu Jyothi’s research points out an additional nuance to a blackout-causing solar storm: the scenario where even if power returns in hours or days, mass internet outages persist.

There’s some good news upfront. Abdu Jyothi found that local and regional internet infrastructure would be at low risk of damage even in a massive solar storm because optical fiber itself isn’t affected by geomagnetically induced currents. Short cable spans are also grounded very regularly.

But for long undersea cables that connect continents, the risks are much greater. A solar storm that disrupted a number of these cables around the world could cause a massive loss of connectivity by cutting countries off at the source, even while leaving local infrastructure intact. It would be like cutting flow to an apartment building because of a water main break.


We are unprepared for large-scale solar events

“What really got me thinking about this is that with the pandemic we saw how unprepared the world was. There was no protocol to deal with it effectively, and it’s the same with internet resilience,”

Abdu Jyothi said: “Our infrastructure is not prepared for a large-scale solar event. We have very limited understanding of what the extent of the damage would be.”

That information gap mostly comes from a lack of data. Severe solar storms are so rare that there are only three main examples to go off of in recent history.

Large events in 1859 and 1921 demonstrated that geomagnetic disturbances can disrupt electrical infrastructure and communication lines like telegraph wires.

During the massive 1859 “Carrington Event,” compass needles swung wildly and unpredictably, and the aurora borealis were visible at the equator in Colombia.

But those geomagnetic disturbances occurred before modern electric grids were established.

A moderate-severity solar storm in 1989 knocked out Hydro-Québec’s grid and caused a nine-hour blackout in northeast Canada, but that too occurred before the rise of modern internet infrastructure.


Solar storms are a real threat to internet resilience

Though they don’t happen often, coronal mass ejections are a real threat to internet resilience, says Abdu Jyothi. And after three decades of low solar storm activity, she and other researchers point out that the probability of another incident is rising.

Another factor that is often overlooked is that Earth’s shield against solar storms, the magnetosphere, is weakening, which means even a moderate solar storm could be problematic.

Undersea internet cables are potentially susceptible to solar storm damage for a few reasons. To shepherd data across oceans intact, cables are fitted with repeaters at intervals of roughly 50 to 150 kilometers depending on the cable. These devices amplify the optical signal, making sure that nothing gets lost in transit, like a relay throw in baseball.

While fiber optic cable isn’t directly vulnerable to disruption by geomagnetically induced currents, the electronic internals of repeaters are — and enough repeater failures will render an entire undersea cable inoperable.

The composition of the seafloor also varies, possibly making some grounding points more effective than others. Recently, an underwater landslide disrupted internet connection in parts of Africa.

On top of all of this, a major solar storm could also knock out any equipment that orbits the Earth that enables services like satellite internet and global positioning.

“There are no models currently available of how this could play out,”

Abdu Jyothi says: “We have more understanding of how these storms would impact power systems, but that’s all on land. In the ocean, it’s even more difficult to predict.”

Coronal mass ejections tend to have more impact at higher latitudes, closer to the Earth’s magnetic poles. That’s why Abdu Jyothi worries more about cables in some regions than others.

She found, for example, that Asia faces less risk because Singapore acts as a hub for many undersea cables in the region and is at the equator. Many cables in that region are also shorter because they branch in many directions from that hub rather than being set up as one continuous span.

Cables that cross the Atlantic and Pacific oceans at high latitudes would be at greater risk from even moderate storms.


The resilience of global internet

The global internet is built for resilience. If one pathway isn’t available, traffic reroutes across other paths, a property that could potentially keep connectivity up, even at reduced speeds, in the event of a solar storm.

But enough damage to these vital arteries would start to destabilize the network. And depending on where the cable outages occur, Abdu Jyothi says that foundational data routing systems like the Border Gateway Protocol and Domain Name System could start to malfunction, creating knock-on outages.

It’s the internet version of the traffic jams that would happen if road signs disappeared and traffic lights went out at busy intersections across a major city.

North America and some other regions have minimum standards and procedures for grid operators related to solar storm preparedness.

And Thomas Overbye, director of the Smart Grid Center at Texas A&M University, says that grid operators have made some progress mitigating the risk over the past 10 years. But he emphasizes that since geomagnetic disturbances are so rare and relatively unstudied, other threats from things like extreme weather events or cyberattacks are increasingly taking priority.

“Part of the problem is we just don’t have a lot of experience with the storms,” Overbye says. “There are some people who think a geomagnetic disturbance would be a catastrophic scenario and there are others who think it would be less of a major event. I’m kind of in the middle. I think it’s something that we certainly as an industry want to be prepared for and I’ve been working to develop tools that assess risk. But yet there are a lot of other things going on in the industry that are important, too.”

The internet infrastructure side contains even more unknowns. Abdu Jyothi emphasizes that her study is just the beginning of much more extensive interdisciplinary research and modeling that needs to be done to fully understand the scale of the threat.

While severe solar storms are extremely rare, the stakes are perilously high. A prolonged global connectivity outage of that scale would impact nearly every industry and person on Earth. [UCS.ICS.EDU, Wired]

Another incoming threat is the widespread extreme drought in the US. You should really watch the documentary film: Megadrought – Vanishing Water and prepare accordingly!

Environmentalism is Euphemism for Genocide