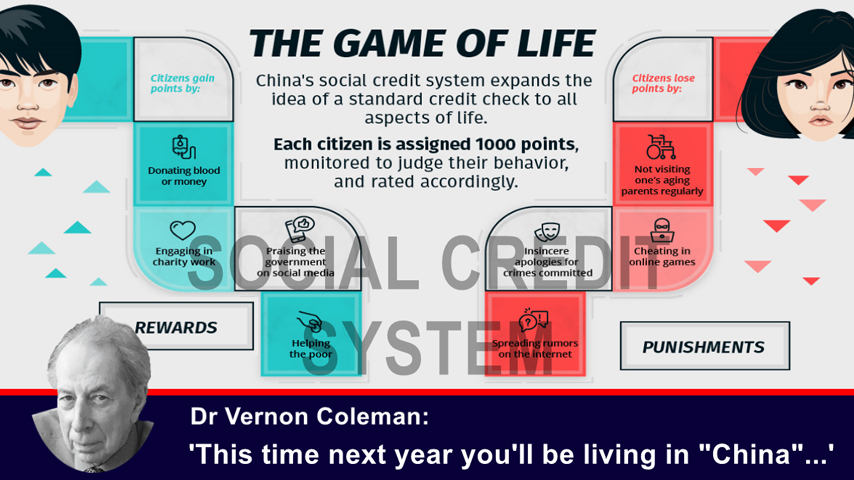 If we lose this war, and for the first time I now fear that we might, it will not be because of the lies and the deceits from the billionaire conspirators who control governments, the media and the professions.

It will not be because of the censorship and demonization of the truth-tellers.

If we lose this war, the most important in our history, it will be because of the collaborators, the trolls and the virtue signallers who obey without thinking, who fuss and whine over trivia and irrelevances, and who fail to understand that we are fighting for our lives and our freedom.

And if we do lose this war there will never be another war worth fighting. We will be pawns; without any control over our lives or our destiny. Sir Klaus Schwab (knighted by Queen Elizabeth for services to conspiracy) boasted that his Great Reset would ensure that we will `own nothing but be happy’. I fear the collaborators, the trolls and the virtue signallers don’t believe him.

I wonder how many of the so-called journalists working for the BBC realise that the lies they are spreading are helping to lead them to a world where they too will own nothing. Doctors, journalists, judges, lawyers and politicians who support the conspiracy, will not be exempt from the conspirators’ blood-thirsty ambition to reduce the world population by 90%. None of them will be exempt from the billionaires’ plan to own everything and rule us as slaves.

If and when the Great Reset takes place we will have no rights, no belongings, no privacy, no freedom, no choices, no family, no health care, no education, no freedom of movement and no opportunity to live where we want to live. We won’t even control our own bodies.

If you think that’s an exaggeration look at the new laws being passed and look at the way everything is changing.

The NHS is just a shadow of its former self with unhappy staff forced to maintain absurd rules about masks and social distancing that were never necessary. Schools shut if there is a loose leaf blowing around the playground.

Millions of people have become willing collaborators; broken by the nonsense of recycling and softened up by the nanny state. They actually believe that the State cares for them and will look after them.

This is what they mean when they talk about the Great Reset. They’re not planning a little light tinkering around the edges of our lives. They are planning to control everything we do; to own us.

The digital society doesn’t just mean being able to pay for your coffee without having to bother with cash. It means only being allowed to buy a coffee if they allow you to do so. The digital society means that they control your money and how you spend it.

The social credit system which Schwab and company have borrowed from the Chinese means that you will lose your right to catch a bus, or rent a house if you question what you are told to do, fail to show proper respect to the system or read or watch material that is forbidden.

Once the Great Reset has been established everyone will receive a universal basic income. And that will be it. No hopes and no ambitions.

I wonder if BBC staff realise that in the New World Order absurdly overpaid BBC presenters will receive the same income as car park attendants?

The collaborators, the virtue signalling zombies who have been trained to jump at every command, who have happily obeyed the lockdown rules, performed the social distancing two step, worn masks and accepted jabs should know that however bad things have been during the last two years they will be far, far worse if the conspirators win the war. Life will never go back to the `old normal’ unless we make it so.

There are some who think everything that has happened recently is just bad luck: the covid hoax; the insane charge towards net zero and the consequences of a manufactured media war between Russia and Ukraine.

That shows a lamentably naïve failure to understand how the world is now being controlled.

The trolls who live and operate away from the action, but who snipe and moan and whinge and create battles out of nothing, are helping the conspirators. The selfishness, ignorance and treachery of the few who claim that germs don’t exist or that vegetarians are BAD people are are being applauded by the World Economic Forum.

Those who think I’m exaggerating might like to ask themselves why anyone who has told the truth about covid or the covid jabs has been immediately silenced, banned, censored, demonised and lied about.

Why does the BBC now ban any honest, open discussion about vaccines or climate change, when the science proves beyond doubt that the covid jabs are unsafe and ineffective and that climate change doesn’t exist?

There is no scientific debate anymore. Newspapers and journals are corrupt and paid to suppress and sneer at the truth. I’ve proved that so-called fact checkers exist to suppress real facts and promote lies.

The fake war between Russia and Ukraine, deliberately triggered by the conspirators, should have made it clear that our governments have declared war on us – it is the war to end all wars.

The sanctions selected as weapons prove that the conspirators are committed to a war that will enable them to control everything we do.

Our governments, doing what they are told to do by the billionaire conspirators, have deliberately created a world where there will be massive fuel and food shortages (with strict food and fuel rationing inevitable), rapidly rising prices and collapsing economies. Hundreds of millions will starve to death in Africa.

Governments aren’t seeking to suppress or intimidate or punish Russia. They are fighting us.

The US Department of Homeland Security openly states that conspiracy theorists and anyone questioning the covid nonsense are ‘extremists’. In Ireland, the Government has stated that The State ‘shall delimit the right to private property where it is necessary to ensure the common good’. The word ‘sequestration’ now appears often. Oppressive new laws are being introduced in the UK. Inconvenient truths are dangerous, say the politicians and the media, and those spreading them must be suppressed.

If the conspirators win this war we will be left with no history, no culture, no sport, no entertainment, no health care, no family life, no privacy, no self-respect, no dignity, no passion and no possibility of enjoying a sense of achievement.

Do you really think it is a coincidence that statues are being torn down, that the cancel culture won’t allow debates, that children are to be allowed to choose their sex, that women are being pushed out of sport and that restrictive new laws are being introduced so quickly that we cannot keep up with what is allowed and what is not allowed?

If you think I am exaggerating then you are, I fear, living in a world as unreal as Charlie’s chocolate factory.

Everything I have warned about for two years has come to pass. Do Not Resuscitate notices are being used to kill off the elderly, the sick and the disabled. The useless PCR tests can be used to take DNA samples (which are then sold to commercial companies) or to give vaccinations.

When the conspirators say ‘You will own nothing and be happy’ that is what they mean. This time next year you’ll be living in ‘China’.

Do you think you’re likely to be one of the chosen ones?

If you want to live in a free world, where you can make your own decisions and your own choices, then you have to put all your energy into fighting the conspirators.

Remember: we are living in a world where our governments have declared war on us. We need to remain constantly aware and suspicious. Whenever anything bad happens ask yourself ‘What is the most sinister reason for this?’ and ‘What do I need to do to protect myself?’

Eternal paranoia is now the price of freedom

‘Social Credit’ is the biggest threat to our freedom and privacy. It is the last step in the pathway to the Great Reset. And we are very nearly there. Take a look at how China is today. That’s how the UK, Europe, Australasia, the US and Canada will be next year. And there will be no coming back. This is the biggest war in human history. And we’re losing. Social Credit: Nightmare on Your Street by Vernon Coleman is available as a paperback and a hardcover book.

The Institutionalized Genocide of ‘Undesirables’