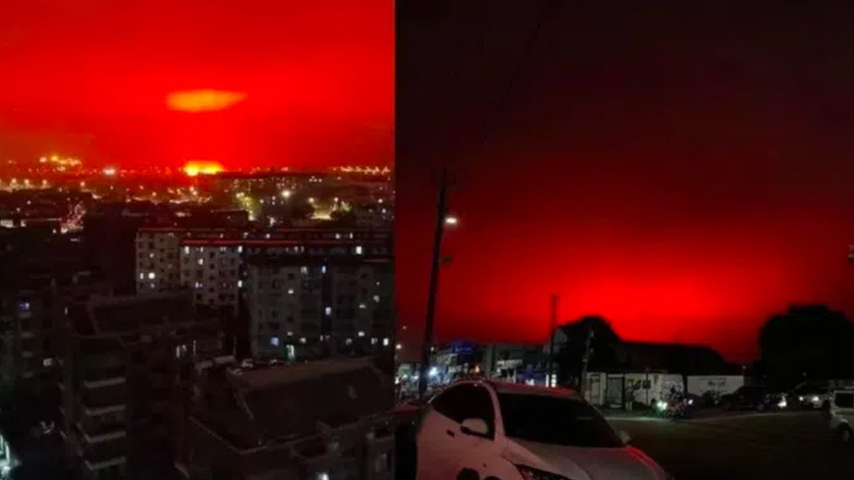 Reports of skies, rivers, rain and bodies of water turning red across the world have shocked Biblical scholars who warn the phenomenon is a sign we have reached the End Times as prophesied in the Book of Revelations.

Residents in China’s eastern port city of Zhoushan were left stunned as the skies above turned the color of scarlet over the weekend, sparking worries of a possible fire or an “unknown phenomenon.” Puzzled Chinese authorities eventually claimed the red skies were the result of “light refracted by local fishing boats,” however this explanation has not convinced locals. Watch the video below.

Rivers in China, Russia, Lebanon, and the Netherlands, as well as bodies of water in the United States, Australia and Sri Lanka, have also turned blood red recently, as reported by reputable news outlets, leaving experts and scientists baffled.

The Molchanka River in the city of Tyumen, Russia, turned red overnight, leaving locals concerned about the quality of their drinking water – and also concerned we have entered the end times.

According to local reports, the river remained the color of blood for around a week.

Officials in western Siberia have not yet released the results of a barrage of tests on samples taken from the river, but state-owned news agency Itar-Tass has labeled the incident a “Biblical bombshell”.

And it’s not just Russia. In Nootdorp, in the Netherlands, canal water has turned a deep red, leaving locals puzzled. The phenomenon has prompted some to remember Biblical prophecies of water turning to blood.

“It looks like red wine,” remarked Nootdorp resident Mark Ruder to the Netherlands’ Telstar Online. “It is probably an algae,” Ruder speculated, “but in our region that just does not happen.”

David Dilling, an American living in the Netherlands who captured the odd phenomenon on video, however, described the canal waters as turning a “blood-red, biblical color.”

Biblical scholars claim that scientific explanations for the phenomenon are of secondary importance to the fact that God said water would turn red at the beginning of the end times. These scholars point to water-to-blood prophecies found in the Old Testament’s Book of Revelation, which explain the phenomenon is one of the signs the end times are upon us.

Australia’s famous Bondi Beach also turned blood red recently. Dubbed “Crimson Tide” by the local media, the event startled Sydney residents who had never seen anything like it before.

And the Beirut River in Lebanon also mysteriously turned blood red after a stream of unidentified red liquid began pouring from the southern bank of the river in Furn al-Shubbak, according to Lebanon’s Daily Star.

“The Jian River that runs through the city of Luoyang, Henan province in northern China, turned bloody red,” CNN reported.

Local Chinese media started receiving panicky phone calls from citizens on Tuesday morning saying that the water of the Jian River near their neighborhood has become blood-like overnight.

And in Texas a fishing lake turned red, sparking end-times speculation from Christians – and even from scientists.

“I’m not saying that this Texas lake is these Scriptures in Revelation, but what I am saying is the Bible prophecies are slowly fulfilling themselves in the midst of an end-time revelation – that we need to be right, we need to be saved, we need to be born again and ready to meet the coming King,” he said.

“God said there would be a rain of blood. Keep in mind, that there will be physical and scientific reasons for things, just like the earthquake God used to make the walls of Jericho fall. Let us keep in mind God said what would happen, not necessarily how!”

Is Pastor Begley right? There is more and more evidence he might be. And Sri Lanka just experienced a “rain of blood.” According to Sri Lanka’s Daily News:

“Rare showers of red rain fell for over 15 minutes in Sewanagala, Monaragala and Manampitiya, Polonnaruwa yesterday morning hours of yesterday and day before yesterday. According to Meteorology Department sources, red rain fell heavily in these areas and the reason has not been found yet. Red rain in Sewanagala and Manampitiya left red frost on the ground. This is the first time red rain was witnessed in Sri Lanka.”

What does the Bible actually say about rivers and bodies of water turning red?

The water-to-blood prophecies are found in the book of Revelation. The second trumpet judgment will bring a great calamity upon the earth:

“The second angel sounded his trumpet, and something like a huge mountain, all ablaze, was thrown into the sea. A third of the sea turned into blood, a third of the living creatures in the sea died, and a third of the ships were destroyed.” (Revelation 8:8–9).

In Revelation 16:3, during the tribulation, God will turn the waters of the sea to blood:

“The second angel poured out his bowl on the sea, and it turned into blood like that of a dead person, and every living thing in the sea died.”

Then in verses 4–6 God does the same to the world’s freshwater supply:

“The third angel poured out his bowl on the rivers and springs of water, and they became blood. Then I heard the angel in charge of the waters say: ‘You are just in these judgments, O Holy One, you who are and who were; for they have shed the blood of your holy people and your prophets, and you have given them blood to drink as they deserve.’”

We also see that God’s two special witnesses during the tribulation will be empowered to perform miracles:

“They have power to turn the waters into blood and to strike the earth with every kind of plague as often as they want” (Revelation 11:6). The two end-times prophets will have the same ability as Moses, who turned the Nile River to blood (Exodus 7:20).

Do contemporary reports of rivers and water turning red match up with these end-times prophecies of Revelation? Many observers believe the answer is yes and we have entered the End Times.