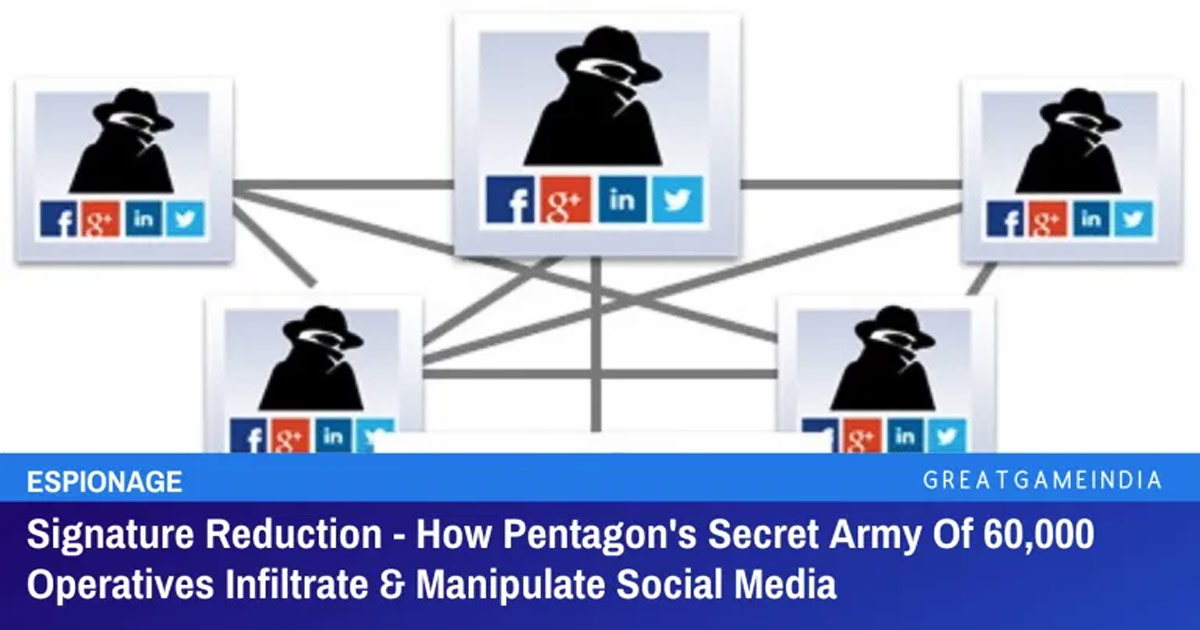 The US military operates a vast network of soldiers, civilians, and contractors that it uses for clandestine missions both at home and abroad, Newsweek has claimed, adding that the force also manipulates social media.

After a two-year investigation, the outlet reported that the undercover army consists of around 60,000 people, many of whom use fake identities to carry out their assignments. The Pentagon’s agents operate in real life and online, with some even embedded in private businesses and well-known companies.

The massive program, unofficially known as “signature reduction,” is reportedly 10 times the size of the CIA’s clandestine service, making it the “largest undercover force the world has ever known,” Newsweek claimed.

But the true scale and scope of the shadow army remain a closely guarded secret. No one knows the program’s total size, and Congress has never held a hearing on the military’s increasing reliance on signature reduction.

There appears to be very little or no transparency regarding the massive clandestine military force, even as its continued development “challenges US laws, the Geneva Conventions, the code of military conduct, and basic accountability,” the outlet said.

Around half of the signature, reduction force is said to consist of special operations personnel who hunt down terrorists in war zones and work in “unacknowledged hot spots” such as North Korea and Iran. Military intelligence specialists reportedly make up the second-largest part of the secret army.

However, the fastest-growing group within the Pentagon’s clandestine force operates exclusively online.

These “cyber fighters” assume fake identities to gather intelligence and search for “publicly accessible information” on the internet. They even reportedly take part in “campaigns to influence and manipulate social media.”

Hundreds of these shadowy keyboard warriors are employees of the National Security Agency, Newsweek reported.

According to the outlet, the network relies on 130 private companies and dozens of little-known and secret government agencies to support its operations. The businesses, which do everything from forging documents to creating disguises, collectively make over $900 million annually to help fund the secret army.

While the Pentagon’s agents typically remain under the radar, Newsweek claims there are several cases in which their covers have been blown. One such incident in 2013 involved American “diplomat” Ryan Fogle, who was arrested in Russia while allegedly trying to recruit a double agent.

The case received wide media coverage and prompted considerable mockery, due to the seemingly outdated spying paraphilia that Fogle was in possession of, including wigs, sunglasses, a Moscow street map, a compass, as well as an old Nokia phone. However, an expert who spoke with Newsweek said the phone was likely concealing a highly sophisticated communications device.

Earlier, GreatGameIndia revealed how the CIA created the Signal app, funded by the US government to protect communications of its agents deployed for regime change.