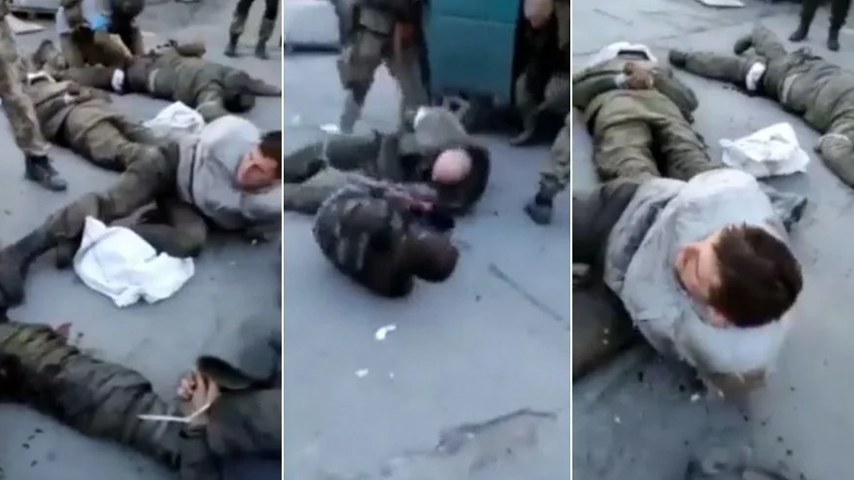 Videos that surfaced late last night purportedly show members of the Ukrainian military shooting Russian POWs in the knees and beating them senseless.

Several correspondents from around the world have called on the International Criminal Court, which Ukraine has invited into their country, to investigate and verify these potential war crimes.

Videos allegedly showing Ukrainian soldiers shooting Russian prisoners of war in the knees have hit the internet alongside a series of clips from the Ukrainian army calling the families and loved ones of deceased Russian soldiers in order to mock their deaths. The footage embedded below is graphic and viewer discretion is advised.

While The Gateway Pundit is unable to independently verify the content of these videos, a foreign correspondent from the BBC has indicated that she reviewed the clips. “Seeing (not sharing) graphic videos from Ukraine. In accepting ICC jurisdiction, Ukraine has enabled ICC prosecutors to investigate allegations of war crimes and crimes against humanity on both sides,” she tweeted. “Rhetoric from some politicians suggests focusing on Russians alone.” Reporters from Sweden’s SVT and Bellingcat’s Elliot Higgins have also acknowledged the release of the videos.

In accepting ICC jurisdiction, Ukraine has enabled ICC prosecutor to investigate allegations of war crimes and crimes against humanity on both sides…

Rhetoric from some politicians suggests focus on Russians alone ⚖️

Firstly, I personally can’t say neither this nor that regarding the veracity of the video (also, warning: graphic content) and what is said about it. But Eliot is right that it’s important to investigate also this type of incident. I hope some clarification will be forthcoming. https://t.co/uQs3aeYNdV

Russian commentators who have been tracking the war on Telegram suggested that provoking an equally brutal response from Russia could be the true motive behind the release of these videos. On one hand, the media in the West is unlikely to promote war crimes committed by the Ukrainians, but if Russia retaliates in kind, that will surely get a significant amount of airtime.

In the videos, Russian soldiers are shown exiting a van under the guard of Ukrainian soldiers.

It might give the impression that the Russian military were captured after having been wounded. But that's not the case. At the end of the video, we can see Ukrainian soldiers shooting all the newly arrived prisoners through their legs.#WarCrimes pic.twitter.com/o7B7M1p2pG

Ukrainian soldiers shoot Russian prisoners of war in the legs and afterwards give them a severe beating. At the beginning of the video, there are Russian POWs lying on the ground with bullet wounds in their legs, some of them have got leg bones broken. #WarCrimes pic.twitter.com/t8Wj33X8rv

Some commentators have attempted to portray the videos as Russian propaganda, suggesting that the victims might have been captured deserters who were being punished. There currently isn’t any evidence to suggest that is the case.

Wilson Dizard, a journalist with Turkey’s public broadcasting station TRT, tweeted that mistreatment of Russian POWs is becoming a “dangerous trend” noting that it is in Ukraine’s interest to humanely treat POWs to encourage more Russians to surrender.

This is a dangerous trend that could be stopped with more cash to build facilities for these captured soldiers, something few expected necessary a the war's start.

Ukraine promising and delivering on humane treatment for POWs will encourage more Russians to surrender. https://t.co/z3HjARHwCQ

Carl Fridh Kleberg, a foreign correspondent with Sweden’s national public news, found the videos credible enough to warrant an investigation while shooting down claims that accents in the video reveal the assailants to be Russian and assertions that the blood is unrealistic:

Plenty of alleged blood on ground in longer video as I’ll assume you know. I was actually shown the longer video in part by a seasoned combat medic who did not appear to share your immediate dismissal, so respectfully I disagree (with stated caveats).

I can tell you right now that many Ukrainians, not least in Kharkiv region, speak Russian as their mother tongue without accent, and also that not showing faces their faces would make sense for several reasons. But yes, should be investigated.