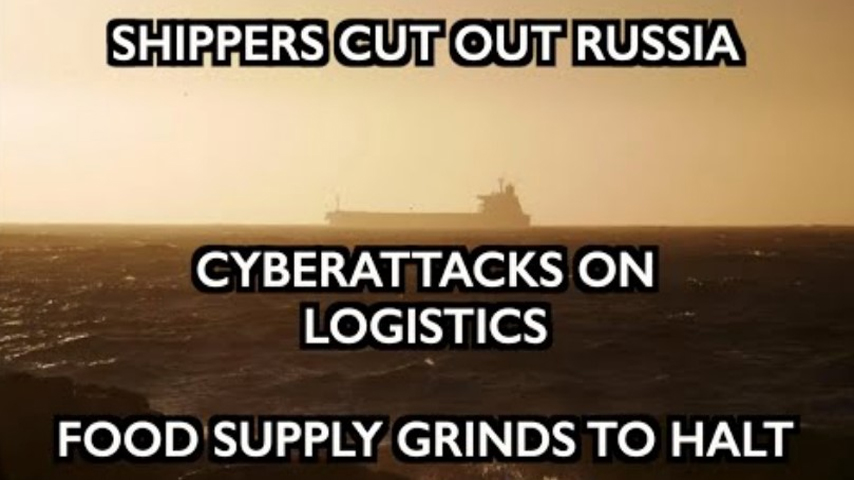 As major shipping companies are cutting service to Russia, and UK bans shipments from Russia, the disruption to global food supply is now a lasting one.

Ukraine has earned the nickname “breadbasket of Europe” for its rich dark soil, vast wheat fields, and other farm goods. The Russian invasion has cut off the world from cheap and abundant wheat supplies.

Ukraine and Russia are vital to the global food supply, accounting for more than a quarter of global wheat trade, about a fifth of corn, and 12% of all calories traded globally, according to Bloomberg.

Reuters reports Ukrainian ports will remain closed until the Russian invasion ends and maritime security is restored for commercial ships.

This means all shipments of farm goods from Ukraine have ceased, and commodity traders will have to search elsewhere.

Activity at Ukrainian ports has been halted since Russia invaded its neighbor last week, and grains trade from Russia is also effectively on pause. Sanctions have been ratcheted up to further isolate commodity-rich Russia from global finance by sanctioning its central bank and cutting off various leaders from the critical SWIFT financial messaging system.

Restricting grain supplies from the Black Sea region threatens to further boost global food prices that are near a record high, at a time when supplies are already strained with adverse weather in many growing regions. – Bloomberg

“If the conflict is prolonged — three months, four months from now — I feel the consequences could be really serious,” Andree Defois, president of consultant Strategie Grains, told Bloomberg. “Wheat will need to be rationed.”

Michael Magdovitz, a senior analyst at Rabobank, said Ukraine and Russia had increased harvests and exports in the last decade at a far lower cost than western farmers, which helped keep wheat prices low. However, that’s not the case today as the Russian invasion sends wheat futures trading in Chicago to a six-year high.

“I’m not going to put a lid on what might happen,” Arlan Suderman, chief commodities economist at StoneX, told Bloomberg. “We could easily be looking at record prices.”

Kyiv-based researcher UkrAgroConsult warned, “the chain of product creation, from cultivation to port shipments, is paralyzed.”

This brings us back to Goldman’s Global Head of Commodities Research Jeffrey Currie, who told Bloomberg TV earlier this month that he’s never seen commodity markets pricing in the shortages they are right now.

“I’ve been doing this 30 years and I’ve never seen markets like this,” Currie told Bloomberg TV in an interview on Monday. “This is a molecule crisis. We’re out of everything, I don’t care if it’s oil, gas, coal, copper, aluminum, you name it we’re out of it.”

The disruption comes as global food prices are already nearing record-highs and could soon be catapulted into unknown territory.