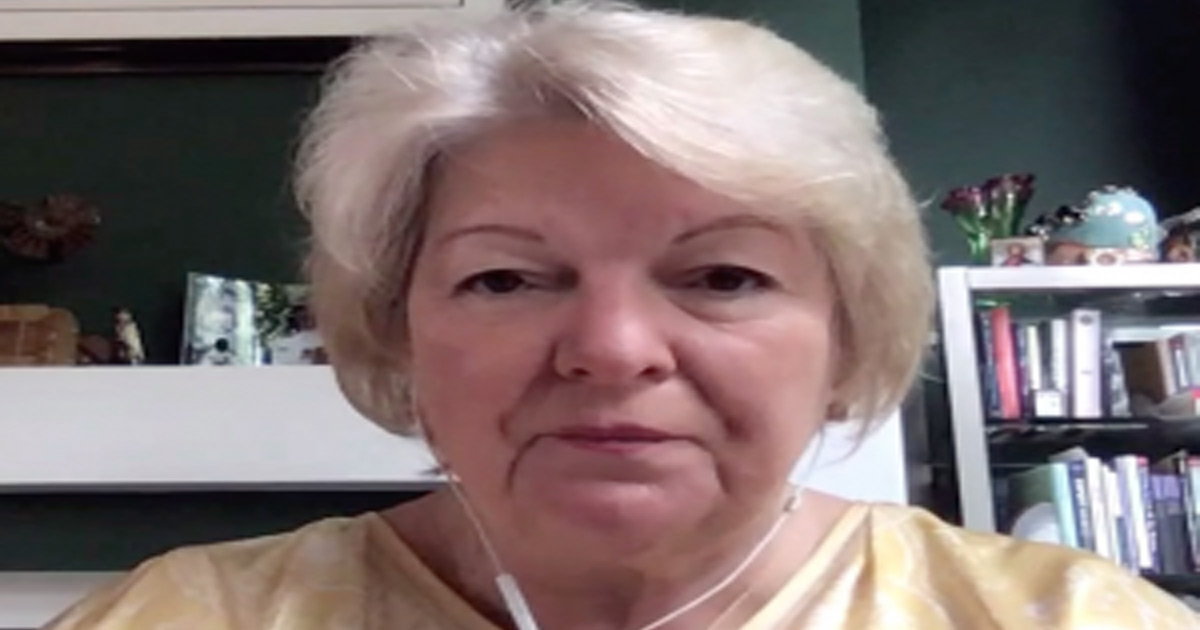 Sherri Tenpenny is an Ohio Osteopath who has written four books challenging the vaccination narrative.

“They’re not asking people who’ve been diagnosed with this mutant strain, is ‘Have you had one of the not-approved vaccines?’ Nobody’s putting that together.”

Dr. Sherri Tenpenny has mapped out eight mechanisms of action of how the mRNA vaccine is going to kill people.

She says, “When you inject the mRNA, the Messenger RNA starts to code for the spike protein…the NIH is now fighting with Moderna over patent rights because you can’t patent anything that’s out in nature, so they had to manipulate the spike protein, in order to be able to patent it and then make an antibody to the spike protein.

“Well, this anti-spike protein antibody is deadly. It’s absolutely deadly. And the first three papers I went through, I found that one of the things the spike protein does is direct attack lung tissue and breaks it down.

“The second thing that it does is it inhibits your M2 macrophages, which are your anti-inflammatory macrophages, so you get cytokine storm and you die.

“The third is that when that Messenger RNA goes in and makes an antibody to the spike protein, it binds it loosely, carries it into a cell, and causes permanent replication. So it’s like having an “On” button with no “Off” button. You’re constantly making this little piece of protein develop more spike proteins against it, make more destruction.

“And then, with this paper that I read last night, of this anti-spike protein, it attacks the astrocytes and the oligodendrocytes, which are two different kinds of cells in your brain. Two different kinds of the central nervous system [cells]. It attacks the inner mitochondria membrane, in two different mechanisms and it attacks this neurofilament protein, which are the motor nerves, which suddenly -we’ve seen those people [with strong tremors], it’s because the spike protein antibody is affecting their motor neurons and their central nervous system.

“And then the primary, number one symptom that people have after they get this vaccine is debilitating fatigue, that they can’t even function in the main part of their lives. Well, it’s because the spike protein antibody attacks the mitochondria and it attacks the GAD 65, which is the intracellular antigen inside of your mitochondria and it can also attack your pancreas.

“If you’re diabetic, it’ll make your diabetes worse. If you’re not diabetic, it can cause you to have diabetes, stiff-person syndrome, cerebellar ataxia, which is what thing that you’re watching [massive tremors]; people not able to walk.

“In the experiment that they did, they took different tissue antigens, like skin and lung and all this other stuff, and then they dropped the serum that had the antibody all over it. 27 out of 55 of the tissue types reacted adversely to the spike antibody.

“So you get this vaccine, you create this antibody, that’s why in the most recent VAERS report that came out this week, 181 deaths, already that have been reported and when you start reading through them, you kind of lay out what these antibodies do, you can see it, right in the VAERS report, what has happened to these people and it’s the anti-spike antibody that’s attacking them and that’s why the most number of deaths occurred about 19 days after the injection because it takes a while to develop the antibody response. It doesn’t happen just like that.

“Unless you have an anaphylactic reaction – probably to the polyethylene glycol- unless you have an immediate reaction to it, the delayed reaction is going to start – it takes a while – I talked to a bunch of epidemiologists in Europe and they said that it takes about 48 weeks to really see the most profound effects of autoimmune disease.

“When I found the first four mechanisms of action, I said to a few friends of mine, ‘This is a perfectly designed kill machine.’

“Perfectly designed, because – the other thing is with that replicating thing because with the vaccine, you’re going to see mutants [of COVID]. So now, we’re all talking about the mutants. The one thing they’re not asking these people, who’ve been diagnosed with this mutant strain, is ‘Have you had one of the not-approved vaccines?’ Nobody’s putting that together.

“So, like you were talking about the girl with meningitis vaccine? This is going to be even worse. So people have got to make some serious spiritual decisions about this…Are you going to say, ‘Oh, I want to get the vaccine so I can get on an airplane,’ or ‘So I can go out to eat,’ or I can keep my job?’ That gets a little harder. Or ‘So I can continue in professional school,’ which gets a little bit harder.

“People are going to have to start making some really hard spiritual decisions about this.”

Dr. Delores Cahill – This is Not a Vaccine
Spike Protein Bioweapon Being Transmitted from Vaxxed to Non Vaxxed People
8000 deaths, 330,00 injuries from Covid Vaxxes

If Bill Gates Was President…