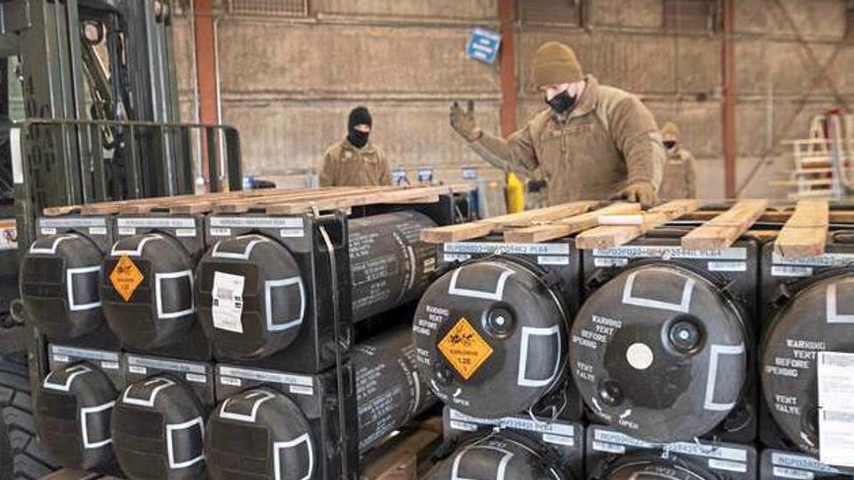 US servicemen palletize ammunition, weapons and other military hardware bound for Ukraine. (Photo by AP)

A senior Russian diplomat has warned the US against supplying long-range weapons to Ukraine, saying that Moscow is determined to use nuclear arms if its existence is threatened.

“We have repeatedly warned the US about the consequences that may follow if the US continues to flood Ukraine with weapons,” said Russia’s Deputy Foreign Minister Sergei Ryabkov on Friday. “It effectively puts itself in a state close to what can be described as a party to the conflict.”

He further reminded Washington of Russia’s military doctrine that envisions the use of nuclear weapons in case the existence of the Russian state comes under threat.

“Russia is capable of fully defending its interests, and the goals of the special military operation will be fully achieved,” Ryabkov said on state television.

“We are warning the US against making provocative steps, such as deliveries of longer-range and more devastating weapons,” he noted. “It’s a road to nowhere fraught with grave consequences, the responsibility for which will lie entirely with Washington.”

He also warned that “a very narrow margin that separates the US from becoming a party to the conflict mustn’t create an illusion for rabid anti-Russian forces that everything will remain as it is if they cross it.”

The official further reiterated that Russia will press on with its military operation in Ukraine until it reaches its objectives.

Ryabkov’s remarks came as the massive flow of US-led arms to Kiev continues, including the American supplies of HIMARS multiple rocket launchers, which the Ukrainian army uses to strike key infrastructure facilities and other Russian targets.

The truck-mounted systems fire GPS-guided missiles that are reportedly capable of reaching targets up to 80 kilometers away.

US officials have so far refused to supply Kiev with longer range missiles for HIMARS launchers that can strike targets up to 300 kilometers away and could potentially allow the Ukrainian military to hit areas deep inside the Russian territory.

This is while Russia’s Defense Ministry reported earlier this week that its forces have destroyed a US-made M777 howitzer gun that Ukrainian forces had used to shell the Russian-controlled Zaporizhzhia nuclear plant located in southeastern Ukraine.

“During the last 24 hours, the Zaporizhzhia nuclear power plant was shelled twice by Ukrainian troops with large-caliber artillery pieces. As a result of the shelling, four munitions exploded in the area of ​​the oxygen and nitrogen station, and one more in the area of ​​the special building No. 1, ” said defense ministry Igor Konashenkov in a press briefing last week.

Konashenkov further noted that the Russian units managed to pinpoint and destroy the position of the US-made howitzer used by Kiev forces, from where the nuclear power plant came under artillery gunfire.