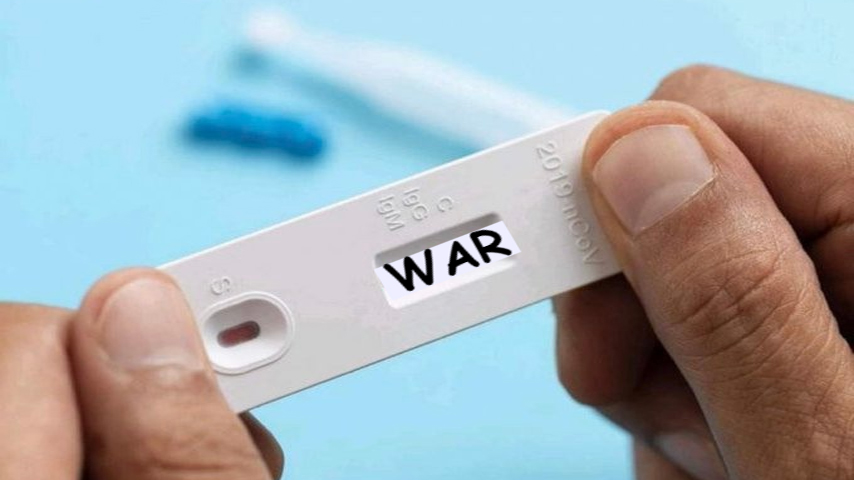 Russia is playing the part that China has been playing for the past few years. One can see it as the passing of the torch. Economic collapse is imminent and somebody has to take the blame.

In Russia, it’s officially against the rules to describe what is happening in Ukraine as a “war.” The government’s media nanny, Roskomnadzor, has prohibited Russian news outlets from disseminating information “in which the ongoing operation [in Ukraine] is called an attack, invasion, or a declaration of war.” Furthermore, media organizations are required to only use “official sources of the Russian Federation” when reporting on the war—sorry, not war.

This reminds me of when “soft” lockdowns were announced in Moscow and other cities in late October—right around the time when the Russian government began aggressively pushing QR codes. Except these weren’t lockdowns! They were “non-working days” (source: Vladimir Putin), “epidemiological holidays” (source: deputy mayor of Moscow Anastasia Rakova), “unplanned vacations”, and “home mode” (source: Moscow mayor Sergey Sobyanin). Home mode!

Look: call this war whatever you want to call it. Edward Slavsquat’s official policy is to always call it a war, forever. We’re simply obliged to do so now.

Stop pretending war was the “only choice.” It was heretical to even whisper about it a week ago

I’m impressed by how quickly The Incredulous 5D Russia Blogs went from “Russia will NOT attack Ukraine! Only a fool would suggest something so ridiculous!” to “THIS WAS THE ONLY CHOICE, PUTIN IS A JUDO BLACKBELT GENIUS.”

Read the recent prophesies of your favorite Russia Analyst. Were there any pro-Putin pundits who argued Russia was preparing to strike and that this was a wise and prudent idea? Practically none. Possibly zero. Anti-Empire.com is the only “alt-media” outlet I’m aware of that repeatedly pointed out there was ample evidence to suggest Russia was planning something completely unprecedented. And there was no moralizing or judgment—it was simply an evidence-based observation.

Remember when it was heretical to even suggest Russia might attack Ukraine? Now you are automatically a 5D chess grandmaster if you cheer for this war—sorry, “not-war.”

What changed between then (heretical!) to now (big-brain 5D chess move)? Not much—apart from a series of embarrassing and cringe false flags and staged attacks cooked up by the FSB. But it made for exciting state-controlled television viewing.

What about the shelling in Donbas? Let’s talk about this.

I’ve been in Donetsk. I’ve spoken with sobbing old women and shell-shocked children who were desperate for help. They just wanted the madness to stop, whatever it took.

When the Kremlin talks about “eight years of genocide” my only response is: “And? Where were you?”

If you think that’s an offensive question to ask let me assure you that plenty of Donbas residents asked very similar questions when I spoke with them seven years ago.

Nobody even liked the Minsk agreements. These accords essentially called for the breakaway republics to return to Ukraine—the best case scenario as semi-autonomous. But wait, why would the people of Donbas submit to a government that is trying to “genocide” them? That’s wacky.

The Kremlin is playing a very cynical game here.

You can’t have it both ways. You can’t say: “The Donbas republics should negotiate with Kiev—one of our main trading partners—with the aim of rejoining Ukraine” and then after eight years declare: “this is an illegitimate Western-backed neo-Nazi regime that is committing genocide and we will forcibly remove these freaks.” You can’t say that after eight years. That’s insane.

It’s one or the other. You can’t conduct trade with Ukraine for eight years and then randomly one day decide it’s time to intervene militarily because Kiev is a den of genocidal neo-Nazis. How does that work, exactly?

Donbas was once teeming with well-armed gentlemen who didn’t want to take orders from Kiev or Moscow. They all got blown up.

The breakaway republics are now led by card-carrying members of Russia’s depraved and completely corrupted Uniparty. Finally, it is time to act.

If you think this war—sorry, not-war—will lead to a brighter tomorrow, let me remind you of what Lugansk rebel commander Aleksey Mozgovoy observed—a few months before he was assassinated in May 2015:

I’d like to appeal to everyone who is fighting—on both sides. People on both sides are fighting against the oligarchy. But somehow we only kill each other, ourselves. So we’re committing a slow suicide of sorts.

The “gladiators” need to break out from the “Colosseum”. Instead, a new Colosseum is being organized. We’re burying ourselves. Do we need it all? War for the sake of war? It’s stupid.

Does anyone remember why we have rebelled? Isn’t it clear that the ones we rose up against are ruling us now? For both sides. Isn’t it time for us to come to our senses, military gentlemen? Otherwise, there won’t be a single one of us left.

And the ones we should be fighting against…they will be living on. Without problems. And everything’s going to be as it was before.

So I appeal one more time: start thinking. Your brain should be working, not your grenade launcher. That’s when there will be order. While the guns are working, there will only be deaths.

If only we listened. It’s probably too late now, unfortunately.

On top of all this, I don’t even know where to begin when people claim what is happening in Ukraine will increase Russian “security.”

I guarantee that NATO’s high command snorted 10 mountains of cocaine after Russian tanks crossed the border. They’re elated. They couldn’t be happier.

We’re talking about a dinosaur-age “defensive” alliance that has never done anything defensive in its entire existence. It’s a fossilized arms-dealing extortion racket run by actual degenerates.

This useless organization—truly, the world’s top parasite—can now point to videos of Russian tanks zooming towards Kiev and say “see? You need us.”

Just to be very clear: what’s happening in Ukraine does nothing to undermine or disrupt NATO, and everything to give this criminal gang a reason to exist.

NATO was probably a booster shot away from dying from myocarditis. But now the scam will continue—probably until we’re all dead.

The Russian government is not “different”

As I wrote hours after hostilities broke out, I seriously doubt that the “de-Nazification” of Ukraine is a top priority for the Kremlin considering the Russian government, just like every other government, is carrying out Nazi-like medical experiments on their own population.

Just look at the Nazi-like crimes against humanity that were taking place days before Russia’s “de-Nazification” campaign in Ukraine began.

On February 10, the media reported that a military cadet was trying to teach himself to walk again after being coerced into taking Russia’s unproven genetic slurry.

I’m 20 years old, I still have my whole life ahead of me. The worst thing for me is to tie my parents and relatives hand and foot. For life with a disabled person is a conscious choice and acceptance of a number of restrictions, which I think you yourself understand. That is why I will die in training to free my parents from this heavy burden. Over the past 11 months I have been to several rehabilitation centers. I never thought that there were so many disabled people in our country. I am so offended that our government absolutely does not care about these ‘second-class’ people. No conditions have been created for these people and they are forced to simply exist.

These are just two reports I found from February. In a country with zero post-vaccination transparency; in a country where it’s against the law to call the state-sponsored violence in Ukraine a “war.”

People get so butthurt about this obvious reality and I honestly have no idea why.

“Another step in the same direction”

What has fundamentally changed? All I see is more stress and uncertainty for the average plebe, not to mention huge pressure to conform to war (sorry, not-war) hysteria—on both “sides.”

And we haven’t even talked about the economic devastation. Which will be considerable. For everyone.

How does this help us, the plebes who have been curb-stomped non-stop for two years?

I will close with some observations made by Russian blogger Anatoly Nesmiyan:

The war gives the criminals who killed millions of people around the world an opportunity to take a breath—now questions about those crimes against the backdrop of new horrors look completely irrelevant.

Not only that: the war allows you to restart the project of further transformation of the world order. And with the same toolkit, you don’t need to change or adapt anything.

The task of the “pandemic” was to force people to exchange personal rights and freedoms for security. Now everything remains as before: the world is in danger, the Russians are advancing, so let’s unite. There is no time to think, it is necessary to comply with the decisions of the authorities. Otherwise we will all die. Another step in the same direction.

In this sense, Putin is an ideal instrument for moving to the next stage, and for this reason alone, no one needs to stop him. Come on, Vlad! We believe in you! …

War is an ideal way to close past accumulated contradictions and clear the building site for new achievements. And that’s why no one is interested in a peaceful resolution of this conflict. With the exception of people, of course, but who cares about them, especially if they are already condemned to extermination by the “new normal”?

It is what it is.

Von Greyerz: All Hell Will Break Loose For Humanity

They Are Making An Example Of Novak Djokovic. Here’s Why