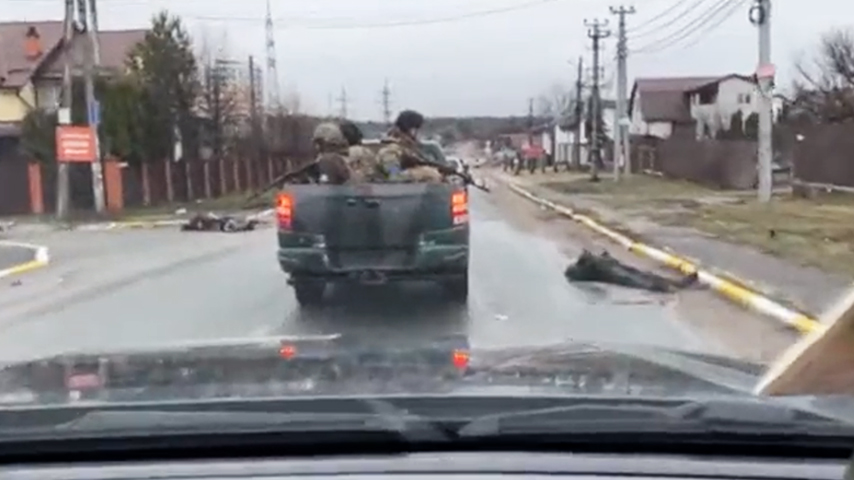 Russian Foreign Minister Sergei Lavrov described the situation as “yet another fake attack.”

Russia has responded to claims that its forces committed war crimes by brutally Murdering civilians in a town close to Kiev, calling the incident “fake” and labeling its orchestration as a “staged” false flag “provocation.”

The so far unverified claims of the Ukrainian mayor of the town Bucha that Russian forces tortured and massacred civilians have been amplified by the media.

The mayor Anatoliy Fedoruk shared footage and photographs of dead bodies strewn about the streets of Bucha, which is 23 miles northwest of Kyiv.

New Srebrenica. The Ukrainian city of Bucha was in the hands of 🇷🇺 animals for several weeks. *Local civillians were being executed arbitrarily*, some with hands tied behind their backs, their bodies scattered in the streets of the city.#RussianWarCrimes pic.twitter.com/outzejdidO

“Any war has some rules of engagement for civilians. The Russians have demonstrated that they were consciously killing civilians,” Fedoruk told Reuters, claiming somewhere in the region of 300-400 civilians were slaughtered.

In a statement, the Russian defense ministry responded, asserting that “During the time that Russian armed forces were in control of this settlement, not a single local resident suffered from any violent actions”.

All the photos and videos published by the Kiev regime in Bucha are just another provocation.

❗ This confirms conclusively this is another #hoax by the Kiev regime for the Western media. pic.twitter.com/VO3umSNwkE

The ministry claims that Russian troops withdrew from the area on March 30 after leaving 452 tons of humanitarian aid to civilians.

“For the entire time that the city was under the control of the Russian armed forces and, and afterwards, until today, in Bucha, local residents freely moved around the city and used cellular communications,” the statement also claimed.

Russian Foreign Minister Sergei Lavrov described the situation as “yet another fake attack.”

“We requested an urgent meeting of the Security Council on this specific issue because we see such provocations as a direct threat to international peace and security” Lavrov further proclaimed.

“Russian servicemen left this city on 30 March, on 31 March the mayor of the city solemnly said that everything was in order, and two days later we saw how that very performance was organised on the streets, which they are now trying to use for anti-Russian purposes”, Lavrov continued.

Reporting on the Ukrainian claims, MSNBC host Ale Velshi called for “direct military involvement” by NATO in Ukraine, and U.S. “boots on the ground”:

The turning point for the west and NATO will come when the sun rises over Kyiv on Sunday, & the war crimes against civilian non-combatants becomes visible to all. There is no more time for prevarication. If “never again” means anything, then this is the time to act.

For the first time since #Russia invaded #Ukraine, @SpencerGuard says he has changed his mind and wants to see more proactive action from the U.S., including boots on the ground. “If we don’t stand up, why are we a superpower.” #Velshi pic.twitter.com/5mJPYy8EE9

As we learn of the horrors in Bucha, Russia’s former Foreign Minister @andreivkozyrev says “it’s a wake up call for the West." If Russia gets "a free lunch in Ukraine, they will next be in the Baltic states or in Poland.” #Velshi pic.twitter.com/niEzKTYMoU

"President Putin is a butcher.”@USEmbassyKyiv’s Chargé D'Affaires Kristina Kvien after seeing the horrifying trail of dead civilians Russian forces left in their wake – Putin ”is going about this horrible war – unprovoked war – in an uncivilized way." #velshi pic.twitter.com/lHbPV0GBH2

Did you watch the two hours of coverage I did on this. Not once did I casually dismiss the threat of nuclear war. I discussed it in almost every single segment. I welcome legitimate criticism but please don’t jump to conclusions.