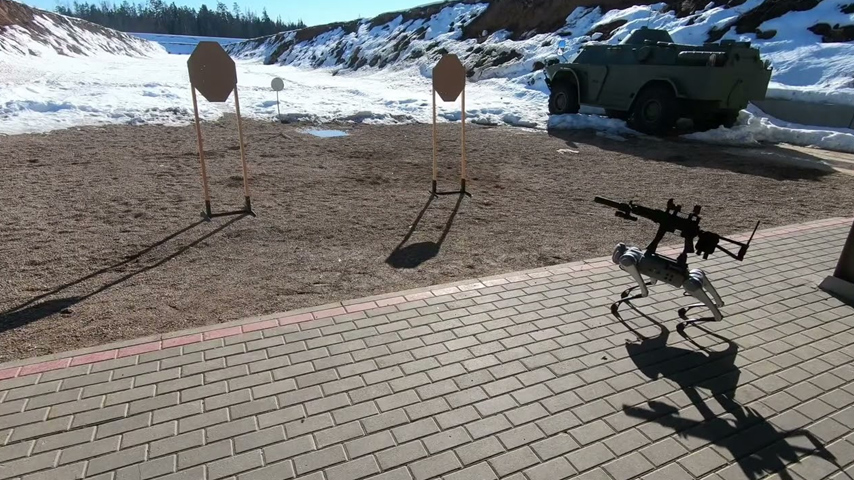 Have you seen the video circulating online showing a robot dog firing an assault rifle?1 The footage of the robot dog walking and shooting at various targets with a rifle attached to its back is chilling, but likely shows a “dangerous toy cobbled together by a Russian hoverbike startup guy,” according to The Verge.2

The YouTube video poster, Alexander Atamanov, has previously posted pictures of himself playing with what appears to be the same robot dog, sans rifle and seems to have a penchant for military equipment. “It seems far more likely he slapped a couple of his interests together, and less likely he’s seriously pursuing a weapon of war,” The Verge noted.3

However, while this particular armed dog-bot may not be cause for alarm, robot dogs with guns do exist, and they’re an ominous warning of what future combat scenarios may look like. In a worst-case scenario, robot murder dogs could also easily be used to impose fear and maintain control over a civilian population:4

“The world’s gradually coming to the realization that the technology really does already exist to turn robots into deadly weapons, and the really scary thought is that they could begin killing autonomously, if they haven’t already begun. It seems almost inevitable at this point, dog or no.”

Warfighter solutions company Sword Defense Systems debuted its Special Purpose Unmanned Rifle, or SPUR, in October 2021.6 Designed to offer precision fire from robots, or “unmanned platforms,” including Ghost Robotics’ Vision-60 quadruped, which resembles a dog, SPUR contains special sensors that allow it to be fired in varied conditions, including at night.

“The SWORD Defense Systems SPUR™ is the future of unmanned weapon systems, and that future is now,” the company writes on its webpage.7 The Vision-60 quadruped, meanwhile, is a dog-like robot billed as an “all-weather ground drone for use in a broad range of unstructured urban and natural environments for defense, homeland and enterprise applications,” according to Ghost Robotics.8 The company explained:9

“Even if the environment is completely unknown, vision sensors degrade or fail, you can be assured that when our legged robot does fail, slip or fall, it will get right back up and continue moving. Our goal is to make our Q-UGVs an indispensable tool and continuously push the limits to improve its ability to walk, run, crawl, climb and eventually swim in complex environments that our customers must operate in, day in and day out.”

Ghost Robotics states that it has more than 25 national security customers and has shipped more than 200 robots so far.10 It has partnered with companies in the defense industry as well as AT&T, Verizon, Amazon and Honeywell, among others.11

It’s easy to see how these autonomous dog robots could quickly be rolled out not only for surveillance and defense purposes but also for offensive maneuvers. “Details about the partnership between Ghost and Sword are unclear,” The Verge noted, “but Ghost’s quadrupedal robots are already being tested by the U.S. military.”12

Why One Robot Manufacturer Prohibits Weapons

Boston Dynamics, which manufactures a variety of quadrupedal robots, including the well-known Spot, has addressed some of the inevitable privacy, civil rights and safety issues that come along with such technology. Unlike many other robot manufacturers, they’ve prohibited the weaponizing of any of their machines.

One of their ethical principles states, “We will not authorize nor partner with those who wish to use our robots as weapons or autonomous targeting systems. If our products are being used for harm, we will take appropriate measures to mitigate that misuse.”13 Further, while they state they will work with government, commercial and public customers, as well as lawmakers, they state that they are committed to complying with privacy and civil rights laws:14

“We will not authorize nor partner with those who wish to use our robots in a way that violates privacy and civil rights laws. We understand that emerging artificial intelligence technologies including computer vision and personal identification algorithms raise questions about the ethics, legality, and potential for bias around their use in the public sphere.”

Still, they believe that the next generation of robots will be partners that “will work amongst us,” creating human-robot partnerships.15 As far as killer robots go, otherwise known as lethal autonomous weapon systems, or LAWS, the U.S. government is on board with them. According to the Congressional Research Service as of December 1, 2020:16

“U.S. policy does not prohibit the development or employment of LAWS. Although the United States does not currently have LAWS in its inventory, some senior military and defense leaders have stated that the United States may be compelled to develop LAWS in the future if potential U.S. adversaries choose to do so.

At the same time, a growing number of states and nongovernmental organizations are appealing to the international community for regulation of or a ban on LAWS due to ethical concerns.”

The Third Industrial Revolution, according to Klaus Schwab, founder and executive chairman of the World Economic Forum (WEF), “used electronics and information technology to automate production,” whereas the Fourth Industrial Revolution, he says, has already begun and “is characterized by a fusion of technologies that is blurring the lines between the physical, digital and biological spheres.”18

It’s the further emergence of artificial intelligence (AI) and integration with humans, and the use of robots in ways that have not previously been seen, or in some cases even imagined.

Kai-Fu Lee, author of the book “AI Super-Powers: China, Silicon Valley, and the New World Order” and a former executive at Google China, said he believes there will be a rapid displacement of jobs as robots replace workers, and in the next 10 years so many jobs will be replaced that people will need to find happiness without working.19 Amazon has also stated that fully automated shipping warehouses, in which robots will replace humans fulfilling orders, may be just 10 years away.20

As part of their Jobs Reset Summit, WEF also stated that 50% of employees will require reskilling by 2025, “as the ‘double-disruption’ of the economic impacts of the pandemic and increasing automation transforming jobs takes hold.”21 WEF claims that 85 million jobs may be eliminated by 2025, while 97 million more may be created to address “the new division of labor between humans, machines and algorithms.”

But the reality is that only a fraction of people would likely find work in this robotic, AI-driven world, which would necessitate the introduction of a universal basic income.

This may initially sound like a good thing, but when your ability to earn an independent income is destroyed, you become dependent on, and at the mercy of, the elite that are in control of that income and the resources surrounding it. Universal debt forgiveness may also emerge — in return for the forfeiture of all rights to private ownership going forward. Bring in weaponized robot dogs and you have a recipe for tyranny.

There are many exciting robotics applications in the works, many of which could have a positive impact on society. For instance, a four-legged robot created by Boston Dynamics was tested at a Boston emergency room, conducting triage interviews with people instead of a human doctor.22,23

Most said the experience was similar to an in-person visit and even expressed openness to robots taking nasal swabs, inserting catheters, drawing blood and more.

The team is now working on smaller robots that would be able to interact with patients outside of a typical hospital setting, such as in an ambulance or field hospital, as well as developing sensors that could take vital signs remotely.24 However, the use of robots can have significant consequences, leading to digital dehumanization.

According to the Stop Killer Robots coalition, technology should be used for empowerment, not to reduce humans to “a pattern of 1’s and 0’s.”25 In addition to working to ensure that humans maintain control in the use of force, they’re calling for international law to be developed on autonomy in weapons systems. Without action, the coalition believes that moral engagement and existing legal rules are at risk, as digital dehumanization expands:26

“Machines don’t see us as people, just another piece of code to be processed and sorted. From smart homes to the use of robot dogs by police enforcement, A.I. technologies and automated decision-making are now playing a significant role in our lives. At the extreme end of the spectrum of automation lie killer robots.

Killer robots don’t just appear — we create them. If we allow this dehumanisation we will struggle to protect ourselves from machine decision-making in other areas of our lives. We need to prohibit autonomous weapons systems that would be used against people, to prevent this slide to digital dehumanisation.”

As AI and robotics advance, humans are moving into uncharted territory, wherein the lines between humans and machines become blurred. According to Google engineer Blake Lemoine, an AI chatbot application called LaMDA, short for Language Model for Dialogue Applications, has achieved sentience, or independent self-aware consciousness.27

Google has dismissed Lemoine’s claims and placed him on paid administrative leave for breach of confidentiality, but there remains much debate over whether AI can become self-aware and evolve beyond human control. The potential for the world to take a very dark turn, especially in light of lethal autonomous weapon systems, would be immense, although many believe that AI is, and will likely remain, nonsentient.

A more urgent concern, at least for the time being, is the ongoing development of robots that are being used to kill. In what is likely only the beginning, in 2020, Iran’s top nuclear scientist, Mohsen Fakhrizadeh, was assassinated using a “killer robot” — a machine gun attached to a robotic instrument equipped with AI and multiple camera “eyes,” which was operated via satellite.28

Reports also claim that weaponized AI-assisted drones may have acted autonomously and killed humans during the Second Libyan Civil War, in March 2020.29 As often occurs, technological advancement has outpaced humans’ ability to fully understand its repercussions, for better or for worse. Speaking the The Verge, Elke Schwarz, who’s affiliated with the International Committee for Robot Arms Control, explained:30

“In my work I try and show that the use of these types of systems is very likely to exacerbate violent action as an ‘easier’ choice. And … errors will very likely prevail […] which will likely be addressed only post hoc.”