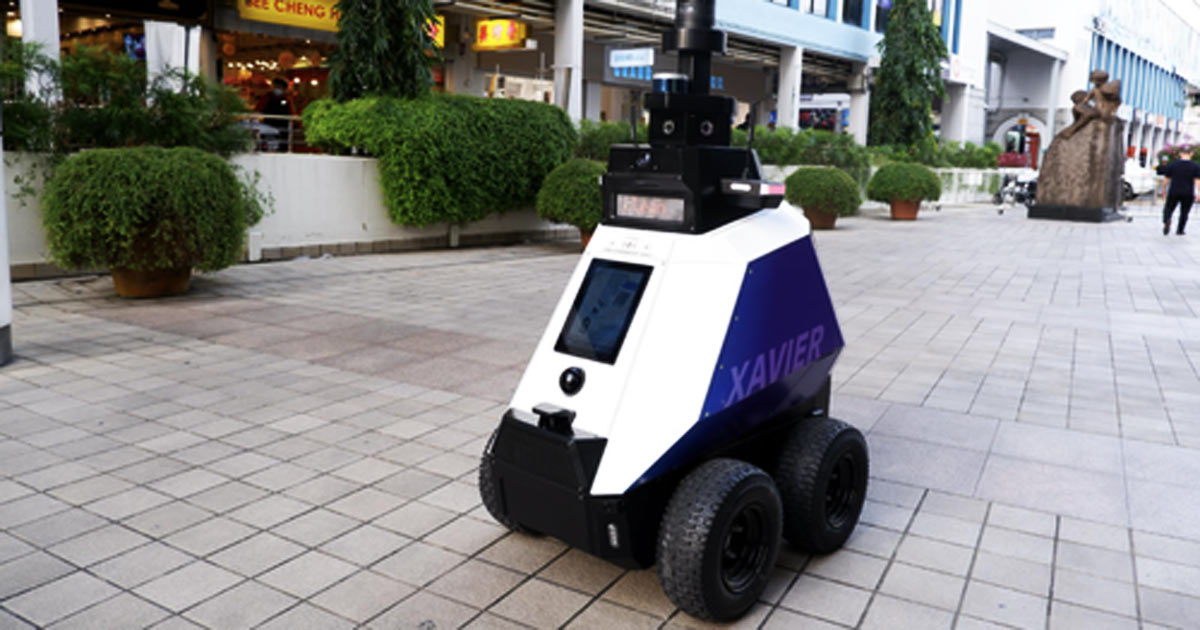 Slowly but surely, the world is transforming into a 1984-Robocop-Terminator-Minority Report–Judge Dredd fusion dystopia.

And while we wait for Elon Musk’s dancing humanoid robot (wonder how much the deposit on that particular pipe dream will be), Singapore is wasting no time, and according to Mothership, the small Asian nation is deploying ground robots on trial to patrol and survey a public area with high foot traffic, in a joint project involving five of the country’s public agencies: HTX (Home Team Science and Technology Agency), National Environment Agency, Land Transport Authority, Singapore Food Agency, and Housing & Development Board.

According to a media release, an HTX robot will be deployed for a three-week period from Sep. 5 to patrol Toa Payoh Central, a planning area and matured residential town located in the northern part of the Central Region of Singapore

The robot(s), called Xavier, will weave its way autonomously through the crowds to detect “undesirable social behaviors” including:

Upon detecting any of these terrifying activities, the robot will trigger real-time alerts to the command and control center and display the appropriate message (depending on the scenario) to educate the public and “deter” such behaviors. The deployment of the ground robot is intended to support the work of public officers and reduce the manpower required for foot patrols.

In other words, Robocop has officially arrived, and while it will be unarmed for now, we suspect it is only a matter of time before these robotic Judge Dredds will also be capable of using lethal force against such ‘terrorist’ activity as smoking or throwing away gum in a public space.

According to Mothership, here is the robotic patrol route, configured in advance by public officers:

And while the robotic nightmares made by Boston Dynamics are still being perfected, Singapore will instead use “Xavier.”

According to the report, “Xavier is able to navigate autonomously as it is fitted with different types of sensors, including safety features. It can avoid stationary and dynamic obstacles, such as pedestrians and vehicles.”

Xavier is also equipped with cameras that can provide 360-degree video feed to the command and control center. Its cameras can also capture images and videos in dim light or the dark.

Like any good drone, data captured from Xavier’s cameras are streamed to a video analytics system, with artificial intelligence capability developed by HTX’s in-house computer vision engineers. With an interactive dashboard, public officers can receive real-time information in a command and control center, and be able to monitor and control multiple robots simultaneously.

The interactive dashboard allows officers to remotely respond to incidents on the ground via a two-way intercom or using pre-recorded audio messages.

And like any good, obedient drone, the only thing missing is deadly force. We are confident that is coming next.

Ten OMICRON “variant” predictions for 2022 and beyond… globalist authoritarian playbook