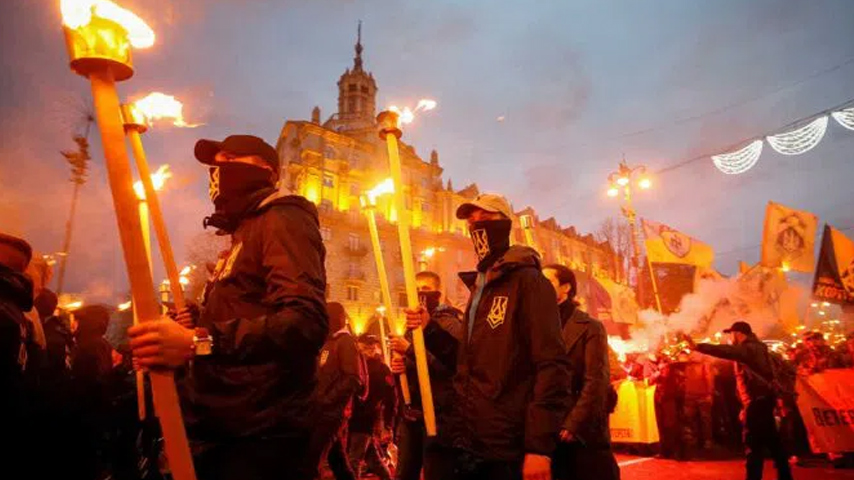 A Russian journalist has visited the former base of the notorious Ukrainian neo-Nazi Tornado battalion and found evidence of murder, torture, and rape, including of underage girls.

The base is located in the village of Privolye near the Lugansk People’s Republic city of Lysychansk, which was recently liberated by Russian and allied forces.

Murad Gazdiev explains that the Tornado battalion was formed in 2014 and was so “murderous, sadistic and perverted that even the Ukrainian government wanted them gone.“

Despite the unit’s designation as a volunteer police battalion, it was led by a career criminal named Ruslan Onishchenko and the core of the group also consisted of ex-cons.

RT report: Tornado was disbanded in 2015 after it faced an array of allegations of kidnapping, rape, torture and unlawful killings. The ‘policemen’ committed many of their grisly deeds at their headquarters, which had been set up in a local school. While the battalion is long gone, the memory of its actions lives on among the locals.

Tornado fighters routinely grabbed people in the streets while searching for ‘separatists’ and inquiring why villagers were not in the army, a local man recalls. He showed the RT crew a dark room with no windows in the school’s basement, which was said to be the torture dungeon of Tornado.

“People came out with bruises, beaten, and some were not found at all. My friend’s son disappeared, he still has not been found,” the man said, adding that some 5-6 people from his village alone vanished without a trace after their ‘stay’ at the battalion’s headquarters.

The exact number of Tornado’s victims remains unknown – locals are still searching for their graves. “They were doing something in the basements, they were walking around dressed like Nazis, they were shooting at the cemetery, they had a shooting range there. People disappeared, we’ve dug up everything around there – no one knows where they have gone,” a local woman said.

Onishchenko was sentenced to 11 years in prison for kidnapping and torture back in 2015. Several of his associates also received jail terms for kidnapping, torture, rape, and looting.

However, shortly after Moscow launched its large-scale operation against Ukraine in late February, Kyiv began releasing inmates who wanted to serve on the frontline – regardless of the seriousness of their crimes. Onishchenko was turned loose earlier this week, despite not having served his term in full, and as he awaited a new trial for his alleged involvement in a 2018 prison riot. Moreover, nearly all of the jailed fighters with the notorious battalion are now said to have been set free.

According to the Ukrainian media, Onishchenko’s original sentence had been computed in accordance with a 2015 law that says one day spent in pre-trial detention counts as two days in jail. However, the former commander had remained behind bars while awaiting trial for the prison riot.

“Nearly all of the battalion’s members are now back on the frontline, fighting in various units of the Ukrainian Armed Forces,” Viktor Pandzhakidze, the ex-spokesman for Tornado, told Ukrainian media.

Russia sent troops into Ukraine on February 24, citing Kyiv’s failure to implement the Minsk agreements, designed to give the regions of Donetsk and Lugansk special status within the Ukrainian state. The protocols, brokered by Germany and France, were first signed in 2014. Former Ukrainian President Petro Poroshenko has since admitted that Kyiv’s main goal was to use the ceasefire to buy time and “create powerful armed forces.”

In February 2022, the Kremlin recognized the Donbas republics as independent states and demanded that Ukraine officially declare itself a neutral country that will never join any Western military bloc. Kyiv insists the Russian offensive was completely unprovoked.