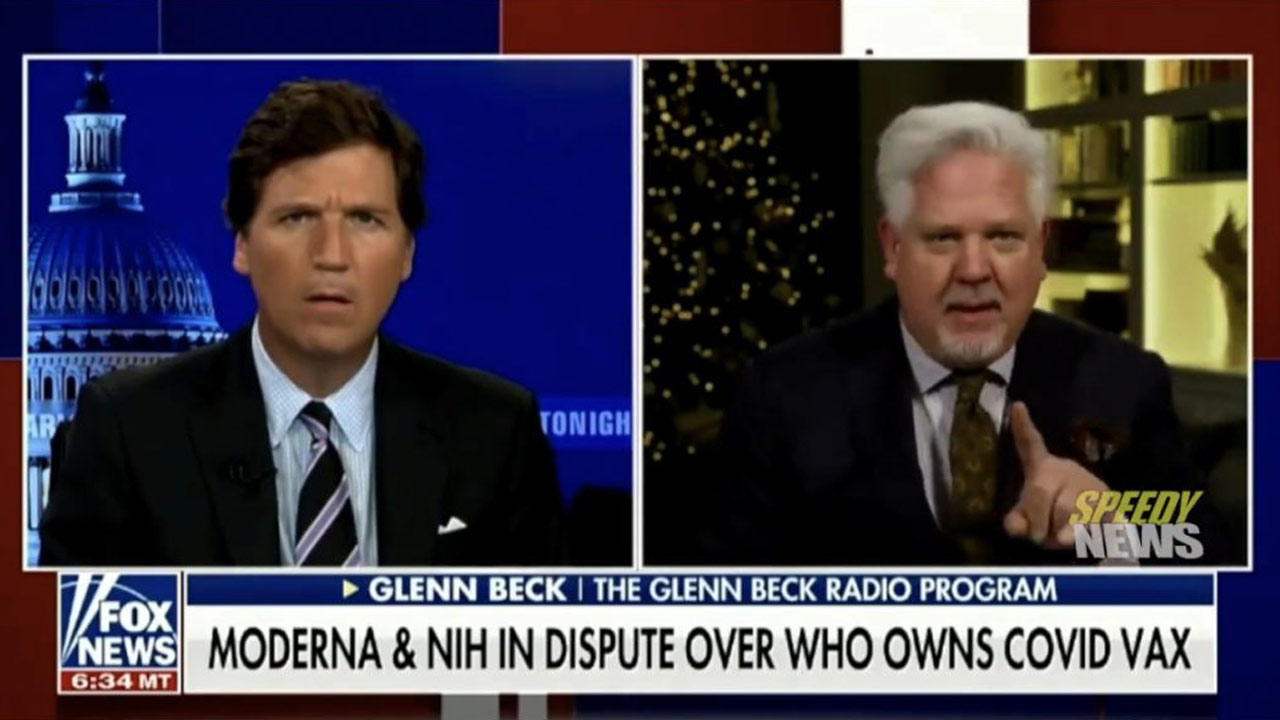 Tucker’s expression says it all!

On Wednesday, radio host Glenn Beck appeared on Tucker Carlson Live Tonight, claiming a partnership between biotech company Moderna and the US National Institutes of Health began BEFORE the Pandemic outbreak.

Glenn Beck then discussed an over 500-page document by Moderna that indicated a private agreement on page 104 by saying, “mRNA coronavirus vaccine candidates developed and jointly owned by NIAID and Moderna.”

Here’s a transcript of Beck’s breakdown, where he detailed key passages in a private, confidential agreement between the NIH and Moderna that was made weeks before the US outbreak:

“We don’t know what happened from there, but we do know just about 12 months later in Wuhan – where Peter Daszak, Dr. Shi, the bat lady, and Dr. Baric were all doing research on coronaviruses – about a year later, there’s an outbreak, and the outbreak actually begins according to documents that we have that have been smuggled out of China that there were ten hospitals involved by October with patients that were now, we now know, are corona-like virus symptoms. They didn’t know what was going on.

“Now, that was in October.

“Remember, we didn’t know anything about this in December; we were starting to get rumblings. China said there was some sort of an outbreak on December 31st, but…Dr. Baric signs a government deal with Moderna; I’m gonna read it exactly to you… this deal was made… it’s confidential…it’s a hundred and, I don’t know, 58 pages long…If I skip to page 104, they are entering a specific private, confidential agreement. The NIH appears to be transferring technology to Dr. Baric, but what they’re making clear is a quote, “mRNA coronavirus vaccine candidates developed and jointly owned by NIAID and Moderna.”

“Now, this is weird because it’s two weeks later that we know there’s a problem. They sign that deal two weeks before, and they sign it with the doctor who happened to be a partner with the bat lady in Wuhan.

“Here’s where it gets really dark. These are the same group of people that, at the end of January, begin to have meetings, and they shut down and begin to smear anyone who’s looking into the lab leak theory. They establish that’s not true, don’t even look there.

“It appears to be collusion. You know we’ve passed this on to several people in Congress and the Senate. We know Rand Paul is on this, and Dr. Fauci has some answers to give.“

Fauci / NIAID signed private and confidential vaccine agreement weeks before we even knew about the pandemic:

It's all starting to unravelpic.twitter.com/sGE4objZYj

Tucker replays a clip of an interview with Dr. Francis Collins, former Director of the National Institutes of Health (NIH), who admitted that the NIH “has a stake” in intellectual property used in the COVID vaccine.

Former NIH Director Francis Collins ADMITS the US government has a stake in the COVID Vax. pic.twitter.com/n8gUyHgDXv

Below are transcripts from a portion of the interview not shown in the video above:

“Gain-of-function, which Fauci says never happened, happened in November of 2015. It happened with Dr. Baric. It was a published paper in November 2015. The USAID and Fauci, with EcoHealth, were funding it; it was happening with the Wuhan people. So we know that, but what you may not know is in November, the same month that published paper comes out, the United States begins a partnership with Moderna, and they are searching for mRNA coronavirus vaccines. Kind of a weird coincidence, but wait, it gets worse.

“In this time, we skip to 2018, DARPA receives a proposal from Dr. Baric, the US guy, Dr. Shi from Wuhan and Peter from EcoHealth, and DARPA sees this and says, ‘This is far too dangerous. We’re rejecting your proposal.”

“It appears to be collusion. You know we’ve passed this on to several people in Congress and the Senate. We know Rand Paul is on this, and Dr. Fauci has some answers to give.“ And, so it continues to unravel!