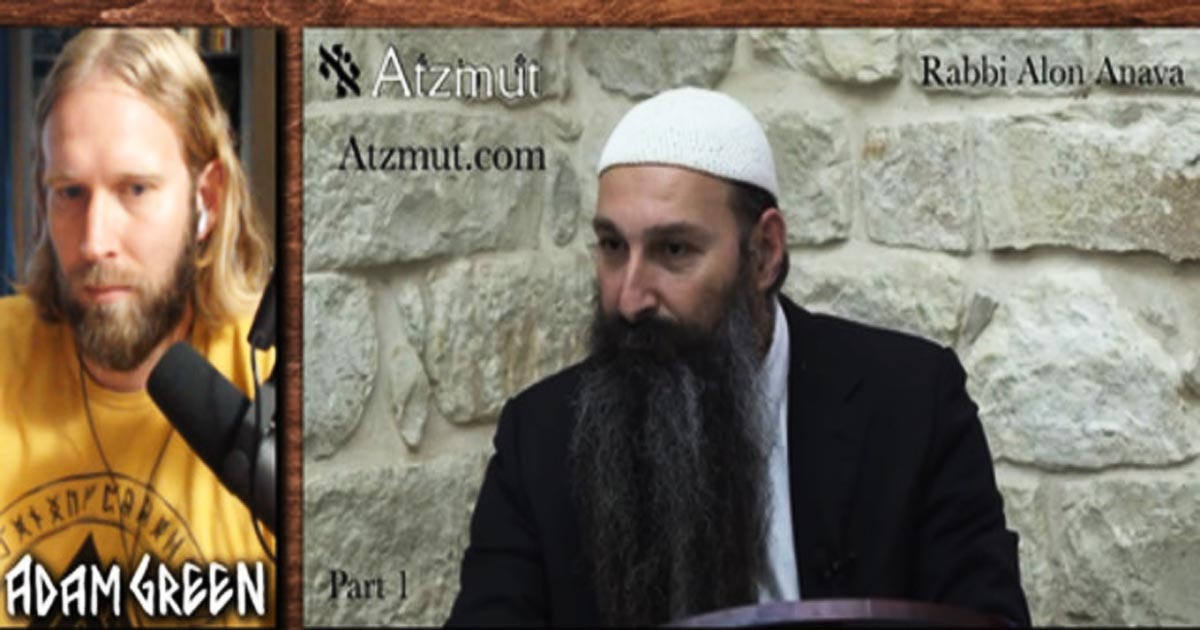 C.J. Bjerknes and Adam Green analyze videos by Kabbalist rabbis.  A dedicated reader, Z, provides an Introduction and a synopsis.

“Tikkun Olam, ‘redemption’, or restoring/repairing the world, as Gentiles think, is laid bare for what really is to be accomplished – genocide. The same applies to their Messiah (Moshiach Ben David) who is to arrive and complete the slaughter of the rest of humanity and enter into the Third Temple to be built. The US, the great ally of Israel and the Jewish people, is not spared from destruction, but is especially targeted for annihilation – such is the level of their hatred and deception towards Christian and European populated nations”

“Bjerknes also points out that Jews themselves have been the victims of Rabbinical rule such as their role in the set-up of the Holocaust and that, per their own secret scripture here, two-thirds of them are slated to be killed in the next planned persecution. Astoundingly, the Rabbis find this a good thing.”

They take credit for the Jewish holocaust.

The video above, “Rabbis Reveal Shocking Kabbalah Secrets”, was produced by Adam Green of KnowMoreNews.org on 7/16/2021 from a compilation of talks given by five Rabbis who are specialists in the Kabbalah. Joining Green to provide explanatory commentary was Christopher Jon Bjerknes, author and Kabbalah expert. This long review covers much of the basic premises of Kabbalah as presented by these Rabbis. Caveat: Both Green and Bjerknes are atheists who proclaim against Christianity in this video. As odious as that is to many, the focus needs to be on what the Rabbis say about their plans for world destruction.

The terms and concepts employed by the Rabbis will likely be difficult to grasp for readers not exposed to this system of thought. Bjerknes does a fine job of explaining this esoteric belief system. It was actually derived from Platonic thought such as the concepts of the Monad and the Demiurge. Some Canaanite and Egyptian beliefs are included in it as well.

The dualistic nature of this system is per the old adage ‘as above, so below’ in that for each concept of goodness, or holiness, there is corresponding wickedness, or evil, counterbalancing it.

For example, Gentiles think of the serpent in the Bible as purely evil, but there is also a holy serpent too in the Kabbahlistic view. The revelations presented herein are not as most outsiders view Judaism, but this video does much to explain world events, past, present, and future, and the basis for the “Jewish Question” which European Gentiles have long struggled with. The little understood that the Kabbalists view them as Esau, their perpetual enemy who must be destroyed.

Bjerknes, who himself is part Jewish in origin, but rejects their ideology, emphasizes that only ten percent or so of Jews fully understand the Talmud, which is also secreted from Gentiles. He elsewhere has stated that perhaps only one in a thousand Jews is so versed in the Kabbalah. This is due to the fact that training in the Kabbalah is by invitation only to a male over the age of 40 who also is an expert scholar in the Torah and Talmud. In this way, they can keep their core beliefs secret.

It is emphasized throughout this video that the Kabbalah is a heavily coded mystery even to qualified Jews and takes much time to understand. Nonetheless, Bjerknes does seem to have cracked the code to share his understanding of what the Rabbis mean by the terms used in their talks. (If you bother to look these terms up, you will not find their complete meaning given.)

Bjerknes also points out that Jews themselves have been the victims of Rabbinical rule such as their role in the set-up of the Holocaust and that, per their own secret scripture here, two-thirds of them are slated to be killed in the next planned persecution. Astoundingly, the Rabbis find this a good thing.

He also shares a strange fact that these Kabbalahists in their doctrine have only 600,000 Jewish males scheduled to survive on earth as in the beginning their god but made that same number of Jewish males souls. (Jewish females are considered as nigh unclean to them also.)

Of course, all Gentiles (aka, Goyim, Kelipot) are to be destroyed in the final battle to cleanse the earth of their inherent evilness (as per Esau and Amalek, the perpetual enemies of the Jews) along with the “Mixed Multitude” who are miscegenated Jews, thus not truly Jewish (Chosen) and those who are apostates to Judaism. 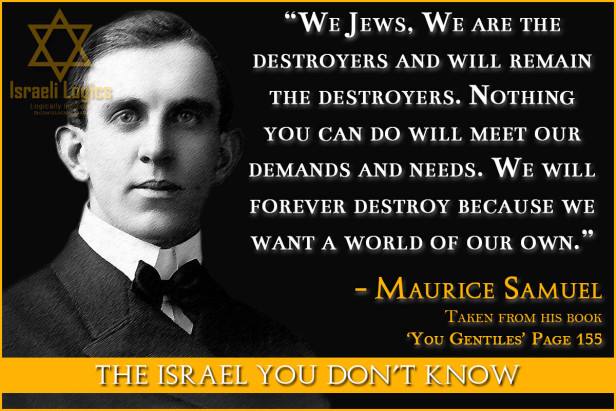 Thus, only the Chosen will have their ‘world to come, a ‘world of their own’ as author Maurice Samuel proclaimed was the desire. Bjerknes thus accurately describes the Kabbalahists as genocidal and suicidal. Green does a good job showing scriptural documentation of these intents as their review progresses.

In this report, in addition to reviewing the Holocaust and the role of Hitler in aiding them, due to the over the assimilation of Jews in Europe, the war plans of the Kabbalahists are outlined – a vast global conflagration is to take place in their end times, which does seem to be now according to Bjerknes. How Gentiles are to be degraded and subject to all forms of suffering is also pointed out herein with explanations as to why.  (The Guardian Angel of Gentiles is Satan.)

That Tikkun Olam, ‘redemption’, or restoring/repairing the world, as Gentiles think, is laid bare for what really is to be accomplished – genocide. The same applies to their Messiah (Moshiach Ben David) who is to arrive and complete the slaughter of the rest of humanity and enter into the Third Temple to be built. The US, the great ally of Israel and the Jewish people, is not spared from destruction, but is especially targeted for annihilation – such is the level of their hatred and deception towards Christian and European populated nations.

Bjerknes does repeatedly implore humanity to rise up in resistance to these plans. He says the destruction need not be inevitable and that the world could overcome them if they so chose. Roughly every few minutes in this intense presentation, new terms, concepts, and facts are addressed, thus it is suggested that those with a strong constitution watch the entire video to grasp the enormity of the plans of the Kabbalists. What also is disturbing about this report is that the Rabbis are so matter-of-fact about it all, gleeful even. Why they chose now to reveal their secrets in public is also a mystery, but of one of serious significance as to their confidence in success. For those of fainter hearts, a summary of highlights of the video is below.

8:55 The evil regime which rules the world, the ‘Mixed Multitude’ (miscegenated or apostate Jews)
17:18 Gentiles are of Cain, Masons say so too. Only 600k male Jews to remain on earth (final population)
22:00 All other Jews (the Mixed Multitude) to be eliminated along with all Gentiles
25:20 Vatican & Masons are of Lucifer (Light-bearer). Such ‘pure’ Jews can be ‘redeemed’, Gentiles (Kellipot) not
27:30 Titus related to Philo, thus a Jew accomplishing the purpose of destroying the Temple, et seq, re mixed multitude
30:20 All governments are their puppets; Hitler was controlled opposition
33:20 Double Agents used – this is the concern & how they felled empires which are boasted of
35:30 Gentiles are to be destroyed in all ways – genetically too
39:00 Mixed multitude are but as ‘ticks’ & the Goyim too, and are to be destroyed
46:00 Gentiles (Goyim, Kellipot) to be erased as if they never existed. Kamala Harris promotes Tikkun Olam which means this
48:00 All who go against the pure, observant Jews are evil. All light to be taken out of Gentiles. Rebuild Temple.
53:00 Jews ‘end times’ (the World to Come), depends on destroying all Gentiles
54:00 There is no ‘redemption (Tikkun Olam) without destroying all Gentiles (Amalek, Esau, Edom)
57:10 The Vatican is Luciferian
59:00 The mechanics of control is to choose subversive leaders who lead Gentiles (Amalek) astray
1:00:00 Holocaust lies; Hitler one of theirs b/c there were too many mixed & assimilated Jews & plans for Palestine
1:24:20 ‘We need evil puppets’ Create Neo-Nazis, how all are used, deceived
1:30:20 Re assimilation, use Russia to take out EU, creation of Israel planned exactly for 1948 based on Torah
1:36:25 If not for the Holocaust, Jewry would have been lost to assimilation
1:42:10 Need to keep Jews separate &  fearful, Messiah (Moschiac) the avenger, exterminator of Gentiles, ’48 & Israel
1:52:00 Kabbalah is the blueprint, not prophecy, as the Holocaust was engineered by them

1:55:40 CJB cracked their code & knows the timeline for Gentile extermination

How Conspiracy Theorizing May Soon Get You Labelled A ‘DOMESTIC TERRORIST’