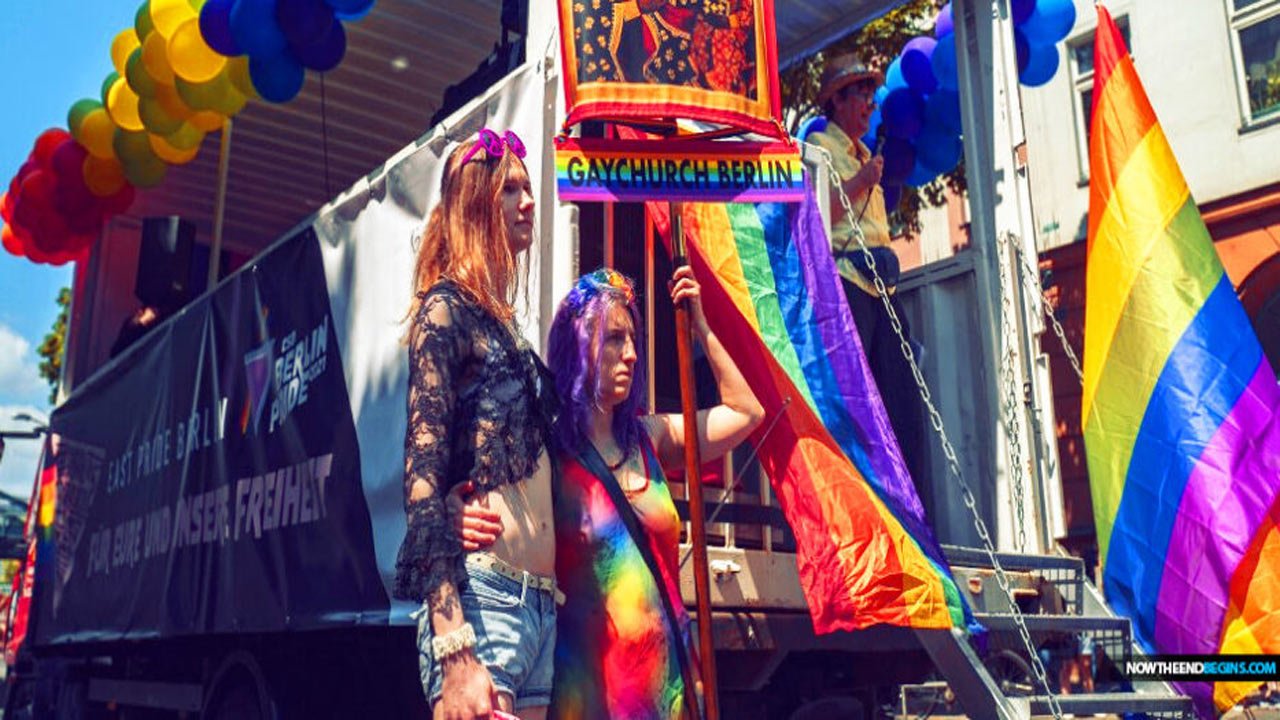 More than 100 Roman Catholic church officials in Germany came out as LGBT, queer or non-binary on Monday, adding to calls for reform within the crisis-hit church, to create a ‘queering’ of the Body of Christ.

In Germany, gay Roman Catholic priests are coming out, literally, and demanding that it is time for the world to see the ‘true diversity’ of the Roman Catholic church, and to demonstrate that the Body of Christ is ‘wonderfully queer’. Hoo boy. They are doing it, they say to put an end to ‘discrimination and exclusion’. To borrow an expression from the lukewarm evangelicals, there is a lot to ‘unpack’ here, so let’s get right to it.

“And I saw the woman drunken with the blood of the saints, and with the blood of the martyrs of Jesus: and when I saw her, I wondered with great admiration. And the angel said unto me, Wherefore didst thou marvel? I will tell thee the mystery of the woman, and of the beast that carrieth her, which hath the seven heads and ten horns.” Revelation 17:6,7 (KJB)

It’s not so much that the Roman Catholic church is getting ready to welcome the LGBTQ into the fold, so to speak, because they are already doing that now on many levels. Pope Francis and his infamous remark of “who am I to judge?” when confronted with homosexuality in their church really tell you everything you need to know. But as the One World Religion continues to assemble itself, this type of thing will be ‘par for the course.’ Yes, the Roman Catholic church will embrace the LGBTQ, but also the Muslims, the Buddhists, the agnostics and just about everyone else including Bible-deficient Charismatics who are anxious to ‘return to Mother Rome’. Revelation 17 and 18 are quite clear as to who Mystery Babylon and the Great Harlot are, and guess what? It is the Roman Catholic church and the Vatican state respectively.

Regarding the ‘queering’ of the Body of Christ, let me just say that that idea is demonic in nature and satanic in execution, and can only happen in the counterfeit Roman Catholic “church” which is in no wise the Church that Jesus shed His blood to create on the cross. You can queer up the body of the Roman Catholic church members, that’s for sure, but the Body of Christ? No sir, those gates of Hell shall not prevail against it.

FROM THE LOCAL GERMANY: Demands for a more liberal attitude to homosexuality within the German church have coincided with the uproar over reports of widespread child sex abuse by Catholic clergymen in the country, including allegations of cases where former pope Benedict XVI failed to act. The 125-strong group, which includes priests and workers in education and administration, published a statement demanding an end to the “discrimination and exclusion” they had experienced.

“I DON’T WANT TO HIDE MY SEXUAL IDENTITY ANY MORE,” UWE GRAU, A PRIEST IN THE DIOCESE OF ROTTENBURG-STUTTGART, WAS QUOTED ON THE GROUP’S WEBSITE AS SAYING.

“We are part of the church,” added Raphaela Soden, who works in pastoral care for young adults and identifies as queer and non-binary. “We always have been. It’s time to finally make it clear that we exist and how wonderfully queer the body of Christ is.”

The statement called for “free access to all pastoral vocations”, and an end to what the signatories called a “system of concealment, double standards, and dishonesty” surrounding LGBT issues.

“Entering into a non-heterosexual relationship or marriage must never be considered a breach of loyalty and, consequently, an obstacle to employment or a reason for dismissal,” they said. The issue of homosexuality has caused a major rift in the Catholic Church between modernizers and conservatives. Pope Francis is himself ambivalent over the sensitive subject.

The pontiff has stirred controversy with his relatively liberal attitude towards sexual orientation, which is at odds with the beliefs of many conservatives in the church.

“IF A PERSON IS GAY AND SEEKS THE LORD WITH GOOD WILL, WHO AM I TO JUDGE HIM?” FRANCIS SAID SOON AFTER HE BECAME POPE IN 2013.

And last year, the Vatican reaffirmed that homosexuality was “a sin” and confirmed homosexuals were unable to receive the sacrament of marriage. In Germany, calls for a more liberal attitude to homosexuality have formed a central pillar of appeals for reform in the church.

Catholics remain Germany’s biggest religious community, with 2.2 million members, but church pews are increasingly empty during services. The crisis has been exacerbated by a string of reports in recent years that have exposed widespread abuse of children by clergymen. Last week, a damning report on the archdiocese of Munich and Freising found that former pope Benedict XVI knowingly failed to stop four priests accused of child sex abuse in the 1980s. READ MORE

DefundThePolice is Another Psyop Distraction To Keep You Confused and Enslaved