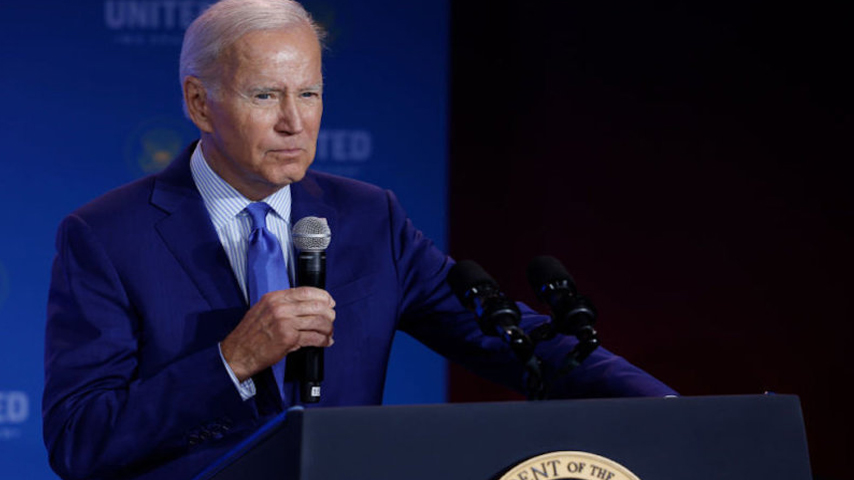 WASHINGTON, DC – SEPTEMBER 15: U.S. President Joe Biden speaks at the United We Stand Summit in the East Room of the White House on September 15, 2022 in Washington, DC.Anna Moneymaker/Getty Images

The Biden administration issued an executive order calling for biotechnology that can “predictably program biology in the same way in which we write software and program computers,” a transhumanist practice, in service of human “health.”

As an example of such biotechnology, Executive Order 14081 included by implication the COVID-19 mRNA injections, citing the COVID-19 “pandemic” as demonstrating “the vital role of biotechnology … in developing and producing life-saving … vaccines that protect Americans and the world.”

The mRNA jabs are an example of what has been described as “the most prominent area of biotechnology”: The “production” of ostensibly “therapeutic proteins and other drugs through genetic engineering.” However, while the proteins produced by the mRNA shot were touted as beneficial, evidence has emerged that they are toxic to humans. In fact, as StatNews noted in 2016, mRNA experiments were abandoned by several pharma groups before the COVID-19 outbreak over “concerns about toxicity.”

In support of its proposal to use biotechnology to “aid” human health, the order called upon the Secretary of Health and Human Services (HHS) to “submit a report assessing how to use biotechnology … to achieve medical breakthroughs, reduce the overall burden of disease, and improve health outcomes.”

Efforts to “program biology” in human beings not only present further potential dangers to health, such as those shown by the mRNA shots, but they would also increasingly open up the possibilities of eugenic “enhancement,” which is why gene editing has often been described as a “Pandora’s Box,” potentially “creating classes of genetic haves and have-nots in society.”

In fact, the use of such technology has been underway for years. For example, the gene-editing tool CRISPR has been used in China to alter the DNA of babies to apparently eliminate susceptibility to HIV.

According to Biden’s executive order, while “the power of” biotechnology “is most vivid at the moment in the context of human health,” it “can also be used to achieve our climate and energy goals, improve food security and sustainability, secure our supply chains, and grow the economy.”

Biden accordingly calls for the use of biotech to “sequeste[r] carbon and reduc[e] greenhouse gas emissions,” as well as “increas[e] and protec[t] agricultural yields; protec[t] against plant and animal pests and diseases; and cultivat[e] alternative food sources.”

As an example of biotech that could reduce carbon dioxide, commonly demonized as a major culprit of global warming, the U.S. Department of Agriculture (USDA) has proposed solutions such as the use of trees and microbes to “draw excess Co2 out of the atmosphere.” The U.S. Department of Energy has also proposed the use of a process to convert waste gases into “important chemicals,” which “captures more carbon gases than it releases.”

More controversial is the use of biotech to “assist” farming, such as by increasing crop yields and protecting against disease through the use of genetically modified (GM) foods, which have been shown to have toxic effects on the human body.

Raising further privacy-related questions is Executive Order 14081’s establishment of a “Data for the Bioeconomy Initiative,” which calls for “biological data sets,” to include “genomic” (gene-related) information deemed critical for societal advances.

The Executive Order further calls for a “plan to fill any data gaps” and “make new and existing public data “findable” and “accessible.” This proposal raises the question of whether and how individuals’ genomic information might be publicly disclosed, and whether it would be done so only with informed consent.

Biden’s call for the “programming” of biology the way we program software, if applied to humans, would facilitate transhumanist’s vision of the creation of “superhumans” through various kinds of technology, including biotechnology.

In anticipation of major transhumanist developments, including biotech advances, World Economic Forum (WEF) adviser Yuval Noah Harari has gone so far as to declare that “we are one of the last generations of homo sapiens,” and that “within a century or two, the earth will be dominated by entities that are more different from us than we are different from chimpanzees.”

“We’ll soon have the power to re-engineer our bodies and brains, whether it is with genetic engineering or by directly connecting brains to computers … and these technologies are developing at breakneck speed,” Harari explained to CNN’s Anderson Cooper on 60 Minutes in October 2021.