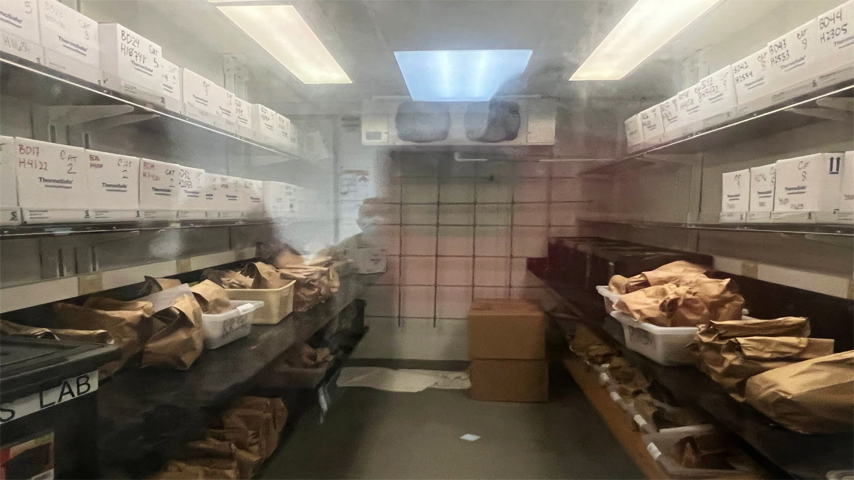 This photograph of the freezer, taken on March 9th, shows the rows of bodies and parts labeled and kept in bags.

SEATTLE, WASHINGTON — Anti-Abortion activists from groups including Progressive Anti-Abortion Uprising (PAAU), Survivors of the Abortion Holocaust, Pro-Life San Francisco, and Rehumanize International gained access to the largest and most active fetal organ bank in the nation located at the University of Washington in Seattle.

Just an hour before this photo was taken, these same activists confronted the UW Board of Regents during public comment to bring attention to the University’s fetal experimentation program and to demand transparency and compliance with federal law.

In 2016, a select congressional panel found UW to be connected to highly suspicious fetal organ harvesting practices, with several members of UW staff employed by Seattle-based abortion facilities which supply the University with fetal remains, presenting a clear conflict of interest. The University has also brazenly failed to produce information subpoenaed by the congressional investigation specifically related to their fetal tissue procurement practices. The University along with Planned Parenthood and other abortion providers and researchers have actually sued to stop any disclosure of public records about these practices.

While UW continues to distribute and traffic the body parts and whole cadavers of unborn children at a rate that surpasses any other known institution in the United States, activists were able to locate the freezer, currently in the UW BDR Laboratory, Department of Pediatrics, 1959 NE Pacific Street, Health Science Building Room RR 346, by examining invoices previously exposed via public records requests by Indiana Right to Life.

Terrisa Bukovinac, Founder & Executive Director of Progressive Anti-Abortion Uprising (PAAU) said, “The American people must be made aware of the mass dehumanization of these unborn children who are violently killed and thrown into a freezer, whose body parts are then portioned out to researchers in pursuit of federal funding. It is my hope that this photograph reminds us all that there are real victims being lethally oppressed by UW and traded like property. Fetal trafficking is abhorrent and it must end.”

Fetal organ harvesting and trafficking is an ongoing and growing practice in the United States, generating millions in federal funding. NIH-funded fetal tissue research studies supplied by UW are known to target the brains of human fetuses — many pain-capable and past the point of viability during the abortion procedure. Procuring “pristine” fetal organs for research requires withholding feticides to preserve the stem cells. This means these often late-term fetuses are torn apart and dismembered alive or, ideally for experimentation, they are delivered through an induction process which, at these late gestational ages, produces born alive infants over half of the time according to a study published in the National Library of Medicine.

Kristin Turner, Executive Director of Pro-Life San Francisco noted that “Children born alive during abortions, and subsequently being killed or left to die is not inconceivable. Kermit Gosnell, a former Philidephia abortionist is now serving life in prison on 3 counts of 1st-degree murder against infants born alive during abortions, among hundreds of other charges. People with widely varying beliefs about abortion asked themselves what could have been done to prevent this human rights violation — when the answer is right in front of us. We are witnessing the same injustice facilitated by universities like UW and UCSF, yet no one is taking action because they care more about their political fight to preserve the practice of abortion, than they do the lives of born-alive infants.”

AJ Hurley, Director of Survivors of the Abortion Holocaust, stated “As someone who has worked for seven years in the UC system and devoted his entire life putting neonates on life support, I can tell you that the practice of fetal organ dismemberment is against every value the medical community was built upon. It’s high time that we put away our political bias and do the obviously right thing. End the organ trafficking of pain-capable human beings.”

Herb Geraghty, Executive Director of Rehumanize International had this to say, “Despite how their traffickers choose to price their body parts, we know that these children’s worth is infinite and inherent. They should not be killed so that researchers can receive more taxpayer funding for their experiments and private companies like Advanced Bioscience Resources can endlessly profit from the cruelty. It is only by exposing these unethical practices to the public and the media that we can hope to end them.”

Seattle local, and PAAU Organizer, Kristin Monahan added “The reality that fetal organ harvesting is happening here in Seattle is heinous. These are our fellow community members whose body parts are being trafficked when they are much too young to understand what is happening. These practices have a depressing effect on adult family members and our community as a whole. I want better for my friends and peers, and their children alike.”

Against whom do ye sport yourselves? against whom make ye a wide mouth, and draw out the tongue? are ye not children of transgression, a seed of falsehood.

Enflaming yourselves with idols under every green tree, slaying the children in the valleys under the clifts of the rocks?  – Isaiah 57:4-5

They have built also the high places of Baal, to burn their sons with fire for burnt offerings unto Baal, which I commanded not, nor spake it, neither came it into my mind – Jeremiah 19:5

“This Is Beyond Imagination”: Polish Homeowners Line Up For Days To Buy Coal Ahead Of Winter

ANALYSIS: George Floyd was deliberately murdered, right on schedule to unleash race riots across America to cause even more chaos