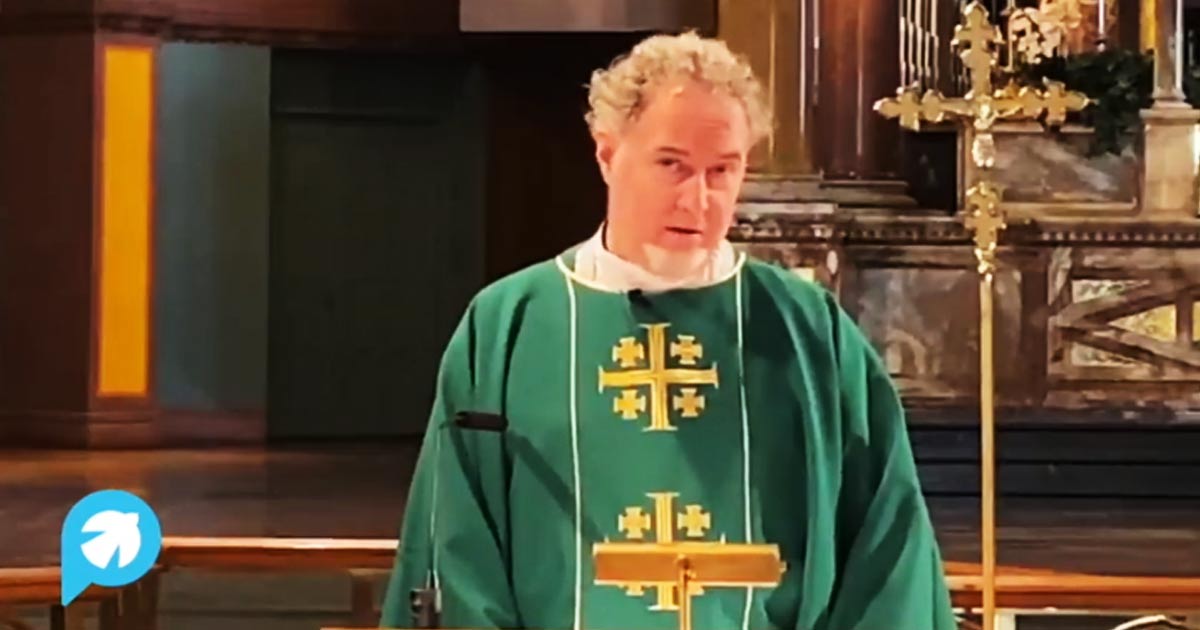 On June 28, 2020, Paulist priest Rick Walsh offered “a reflection” entitled “We All Belong to Each Other” at St. Paul the Apostle Catholic Church in New York city; the parish is the motherhouse of the Paulist order.

On June 25, 2020, Walsh also was the “celebrant” for the parish’s Pride Mass sponsored by the Paulist’s LGBT ministry “Out at St. Paul. (OSP)” During his “reflection” Walsh said:

Jesuit priest Donal Godfrey once wrote something strangely similar:If God must become Asian or African, then God is also in some sense queer…Is it less appropriate for gays to imagine Jesus as gay than for African Christians to picture him as black, Asian Christians as Asian?

The “queer-Christ” meme has become a cornerstone of so-called Catholic LGBT ministries.

OSP has a long history of gay-affirmative pastoral practices and public statements in support of same-sex marriage. On May 15, 2018, Out at St. Paul, hosted a “Rooftop Social” at gay sports bar Boxers in Hell’s Kitchen.  However, this is not the first time Out at St. Paul has held meetings at gay bars.

On March 22, 2017, Out at St. Paul hosted a “Spring Social” at the Hell’s Kitchen gay bar Bottoms Up. Then again, on January 31, 2018, they hosted their “Winter Social” at the Rise gay bar in Hell’s Kitchen. In the past, Out at St. Paul sponsored and promoted “your favorite queer saint,” “countertraditions” to Adam and Eve, and “Christian” theories in support of same-sex marriage.

On June 16, 2018, concerning an article from the gay-periodical “The Advocate,” in which they reported that Pope Francis’s “definition of a family excludes same-sex couples,” Out at St. Paul stated: “Pope Francis is wrong.”

On August 3, 2018, OSP posted the following message to their official Facebook page:

Yesterday, Pope Francis declared the death penalty inadmissible in all cases. It shows us that Catholic teaching can and does change over time (or, “develop,” using theological terminology). Pope Francis specifically called for the language in the catechism to be altered. He has the power to recognize other “developments” in doctrine as well.

This is why we push for the language about LGBTQ people in the catechism to change. We are not, and have never been, “intrinsically disordered.” It is time for the Church to listen to LGBTQ believers and recognize the harm that its official doctrine has caused to millions of people around the world.

Out at St. Paul is a favorite of James Martin. On July 16, 2017, Martin, addressed Out at St. Paul; he previously spoke to the group on March 2, 2017. On several occasions, Martin has recommended both the Parish and OSP (see video interview, and a Facebook live discussion.)

Following his July 2017 appearance at OSP, to publicize his latest book, “Building a Bridge: How the Catholic Church and the LGBT Community Can Enter Into a Relationship of Respect, Compassion, and Sensitivity,” Martin posted pictures to his Facebook account from the event and thanked the following:

Thanks to Fr. Gil Martinez, CSP, the pastor; Xorje Olivares and everyone at “Out at St. Paul’s,” the LGBT outreach group at the parish; and everyone who came to the “Building a Bridge” event tonight.

Dear friends: “Out at St. Paul” is one of the most dynamic Catholic LGBT ministries in the country, and probably the world. It is a ministry of the Church of St. Paul the Apostle in New York City, just next door to our Jesuit community. They shared this video with me and asked me to share it with you. May it give hope to parishes who are striving to be welcoming places for everyone.

Gil Martinez was the former chaplain for Out at St. Paul. He had been an outspoken supporter of the group, specifically promoting the “Owning Our Faith” video series which was sponsored by OSP and St. Paul the Apostle Parish. In 2015, Martinez traveled to Rome and personally gave a copy of the video “Owning Our Faith” to both Pope Francis and Cardinal Walter Kasper.

On March 5, 2018, Cardinal Kasper celebrated Mass at St. Paul the Apostle. The video features testimonies from several OSP members as well as “gay” and transgender advocates including dissident nun Jeannine Gramick who was officially sanctioned by the Vatican in 1999 and permanently prohibited from any pastoral work involving homosexuals and Warren Hall, a self-outed “gay” priest.

Warren has since been suspended and in 2017 he wrote:

…I could not in good conscience take the Oath of Fidelity that all priests take upon ordination and when assuming a pastorate, namely, that I “accept and hold everything that is proposed by the hierarchy” and that I “adhere with religious submission of will and intellect to the teachings.”

Also included is an interview with a “gay” married couple, one of whom stated:

If we leave it, if we abandon the Church then it’s never going to change. So we have to continue living here, being an example and encouraging other people to be that example because that’s what’s going to change the Church.

And another “gay” man who said:

I think what’s interesting is that the Catholic Church probably thinks that it is accepting of gay people, because its message is ‘gay people exist and we should love them and not discriminate against them. But because the Church also tells gay people essentially that they need to be celibate, what the Church is saying is ‘you cannot live fully. You can be gay but you can’t live that life.’ And so that inherently is discriminatory.

Excerpts from “Owing Our Faith” are included in a video from James Martin, in which he addresses “5 common questions about ‘Building a Bridge.’”

In residence at St. Paul the Apostle Parish is Fr. David Dwyer, the host of the SiriusXM Radio program “Busted Halo.” Cardinal Timothy Dolan is a frequent guest on the show.

On July 1, 2018, the Archdiocese of Los Angeles approved Martinez as Pastor at the Paulist parish St. Paul the Apostle in Los Angeles.

In 2019, Martinez returned to New York City to celebrate Mass for Out at St. Paul in front of the building where the Stonewall Riots occurred in 1969.