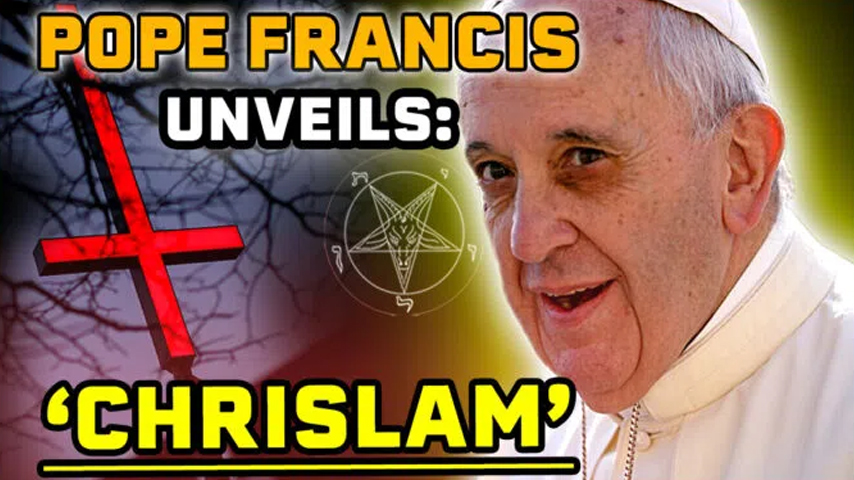 Pope Francis is one of the most hated men in the world today. Those who hate him most are not atheists, or protestants, or Muslims, but his own followers.

Why do Christians and Catholics hate him so much? Because he is fluent in blasphemy and is actively working to subvert the church and Christianity in general.

This is the pope who informed his flock that “relationships with Jesus are dangerous and harmful.” Breaking with centuries of Christian tradition, Pope Francis sparked fears that he is an illegitimate pope with a sinister agenda when he told a crowd of 33,000 pilgrims in St. Peter’s Square in Rome that “a personal, direct, immediate relationship with Jesus Christ” must be avoided at all costs.

And as though that wasn’t disturbing enough, Francis followed up with the equally sinister proclamation that “Jesus is Satan.”

Pope Francis’ inverted version of Christianity is confusing for many, however, the picture becomes clear when you understand who the pontiff is really serving. To quote French presidential candidate Marine Le Pen, Pope Francis is a “globalist bulldog” who is loyal to the New World Order.

Speaking with Ecuador’s El Universo newspaper, the Pope said that the United Nations does not have enough power and must be granted full governmental control “for the good of humanity.”

Disturbingly, world religious leaders are also beginning to come together as one to preach from the same hymn sheet, instructing their sheep to accept the components of the New World Order’s one world government.

Now, Pope Francis is actively defying Biblical scripture by working to create a “one world religion.”

First Francis shocked the Christian world by hosting Islamic prayers and Quran recitals in the Vatican.

Christians around the world should visit mosques and praise Allah, according to Pope Francis who led by example on his visit to Istanbul by entering the Blue Mosque, taking off his shoes, facing Mecca, and praising the Muslim god.

Then came the pagan ceremony and brazen idol worship on Vatican grounds.

And in case you missed it, world leaders from a diverse collection of communities called for world unity at an inter-religious conference in Kazakhstan last week. According to Francis, “religious pluralism,” which is expressly forbidden in the Bible, is an expression of “the wisdom of God’s will.” Here is some of the story from the Catholic News Agency:

The interreligious congress in which Pope Francis participated this week in Kazakhstan adopted a declaration calling religious pluralism an expression “of the wisdom of God’s will in creation.”

The 35-point declaration was “adopted by the majority of the delegates” of the Seventh Congress of the Leaders of World and Traditional Religions Sept. 15 in the capital city of Nur-Sultan.

Pope Francis participated in the opening and closing ceremonies of the interreligious summit during his Sept. 13–15 visit to the Central Asian country.

It’s not the first time the pope has encouraged humanity to accept the New World Order and all that it entails.

In 2019, Pope Francis signed a historic covenant with leaders of the world’s major faiths, pushing us much closer to a one-world religion, one of the major goals of the New World Order.

According to the document produced by Pope Francis and published on the Vatican’s official website, all religions must be considered equal, and Islam is as acceptable to God as Christianity.

In reality, the call for global government and one world religion by Pope Francis and other wealthy elitists has nothing to do with lifting up impoverished nations or “saving humanity.” Such a government would instead guarantee global wealth inequality, global surveillance of the kind promoted by Klaus Schwab’s World Economic Forum, and a world run by the exact corrupt interests who used the pandemic to consolidate wealth and power worldwide.

Is Pope Francis the antichrist?

From the moment that Cardinal Jorge Bergoglio became pope in 2013, “prophecy experts” took to the airwaves, claiming that the new pope is “Peter the Roman,” the fulfillment of the “prophecy of St. Malachy” and that Francis will be the final pope and the end of the world.

According to St. Malachy, an Irish saint who had correctly predicted the past 111 popes ahead of the naming of the 112th pope, “Peter the Roman” would be the antichrist.

Doomsday fans have found ways to link each phrase to a corresponding pope through the centuries. That includes John Paul II, who is associated with phrase No. 110, “From the labor of the sun,” because he was born on the day of a solar eclipse and was entombed on the day of a solar eclipse as well. Benedict XVI, No. 111, is supposed “glory of the olive” because some members of a branch of the monastic order founded by St. Benedict are known as Olivetans.

Then there’s No. 112. According to St. Malachy: “In the extreme persecution of the Holy Roman Church, there will sit … Peter the Roman, who will nourish the sheep in many tribulations; when they are finished, the city of seven hills will be destroyed, and the dreadful judge will judge his people. The end.”

So how does “Peter the Roman” link to Pope Francis, who was born in Argentina? His parents were Italian immigrants, from Rome, and his birth name contained the name Peter. One theologian, Michael K. Lake, is quoted as saying that “Catholic and evangelical scholars have dreaded this moment for centuries.”

The world is now at a tipping point, with a fierce battle raging for the soul of humanity. The globalists and their technocratic dreams of totalitarian rule threaten to consume humanity and destroy civilisation as we know it.

It’s clear whose side Francis is on. And we haven’t even covered the pedophilia scandal that is rotting the Catholic church from the inside out. We should keep a very close eye on this Jesuit pope during these pivotal years.

Proof: Teens With Myocarditis Are Having Heart Attacks