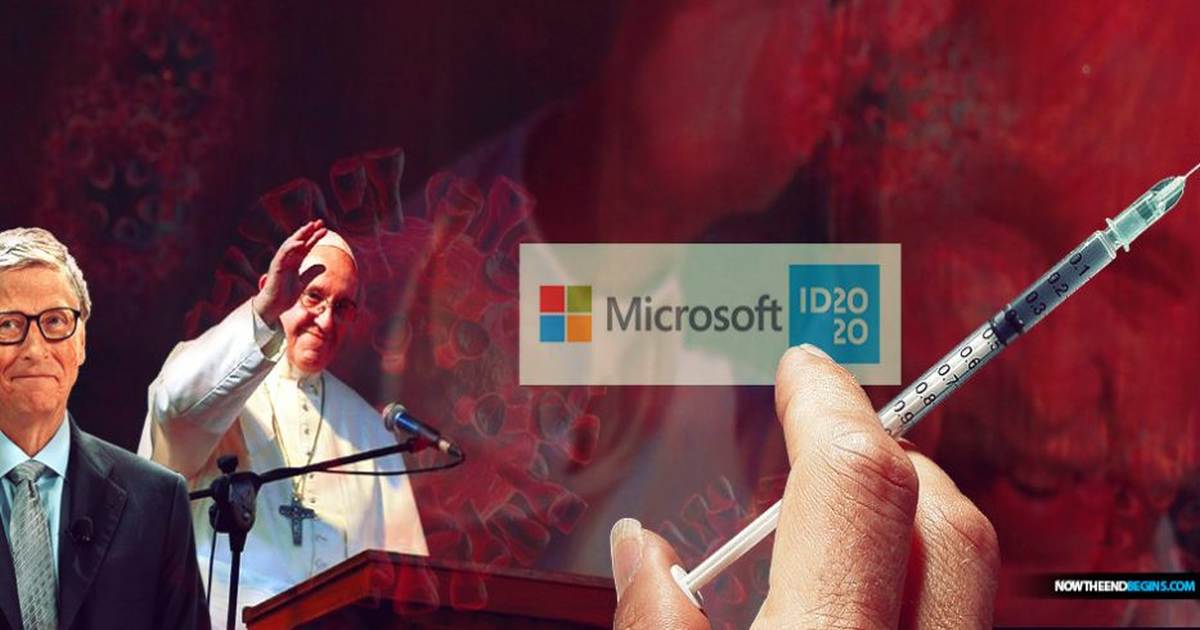 Pope Francis has backed global elites such as Bill Gates when it comes to a Coronavirus vaccination, saying that it should be “universal and for all.”

It was only a matter of time, and now here it is. Pope Francis officially siding with the global elites like Bill Gates in calling for global COVID vaccinations, never mind that those vaccines will contain aborted baby parts. Never mind that those vaccines are the weapon of choice for the New World Order, and never mind that with those global COVID vaccines comes global digital identification. I guess all those high level meetings with Microsoft at the Vatican has resulted in partnerships on a variety of levels, eh? Me thinketh so.

“And I saw the woman drunken with the blood of the saints, and with the blood of the martyrs of Jesus: and when I saw her, I wondered with great admiration. And the angel said unto me, Wherefore didst thou marvel? I will tell thee the mystery of the woman, and of the beast that carrieth her, which hath the seven heads and ten horns.” Revelation 17:6,7 (KJB)

Month after month, we are watching the New World Order players reveal their agenda, and for the born again bible believer who possesses the discernment of the Holy Spirit, recognizing what we are seeing is literally the easiest thing in the world. But what about for those people who are not born again, and who do not have Holy Spirit discernment? Well, you’ll be the ones taking the vaccine, and receiving the implantable Immunity Passports from ID2020.

Pope Francis backs ‘universal’ COVID vaccine ‘for all’, WHO thrilled

FROM LIFE SITE NEWS: In his Wednesday afternoon address, the Argentinian pontiff made his comments in the context of opposing rich countries and people obtaining the COVID vaccine.

“IT WOULD BE SAD IF WE GAVE PRIORITY FOR THE COVID-19 VACCINE TO THE RICHEST PEOPLE,” POPE FRANCIS DECLARED. “IT WOULD BE SAD IF THIS VACCINE BECAME THE PROPERTY OF THIS OR THAT NATION AND WAS NOT UNIVERSAL AND FOR ALL,” HE CONTINUED.

Vaccine critics, including environmental lawyer Robert F. Kennedy Jr., are warning that key parts of testing are being skipped in the push to develop a COVID vaccine. Critics warn about the risks of large-scale injury and other health-related consequences that could result from a largely untested vaccine that is suddenly injected into millions.

Earlier this year, a Canadian inoculations watchdog alerted LifeSiteNews to the dangers of vaccines that are developed too quickly. Ted Kuntz, president of Vaccine Choice Canada (VCC), a society founded by families who have suffered from vaccine reactions or injuries, warned in May that Canadians should be concerned about the safety of a coronavirus trial vaccine manufactured by China.

WHEN IS A VACCINE NOT JUST A VACCINE? WHEN IT COMES FROM THE NEW WORLD ORDER

Some authorities, like Professor Giuseppe Tritto, an internationally known expert in biotechnology and nanotechnology, have warned that developing a single vaccine for a virus for which the original genetic code is being withheld by the Chinese and which has already mutated into a dozen different strains is “extremely unlikely.” This has resulted in many speculating on an ulterior agenda behind the global push for a COVID vaccination.

The Pope began his Wednesday speech by saying that the coronavirus pandemic had revealed the difficult situation of the poor “and the great inequality that reigns in the world.” Although the coronavirus does not make exceptions between people, he said, it had nevertheless found, in “its devastating path, great inequalities and discriminations” and even increased them.

Pope Francis said that there must be a two-fold response to the situation: both a cure for the “little virus” of COVID-19 and a cure for the “big virus,” “that of social injustice, of unequal opportunity, of marginalization, and of lack of protection for the weakest.”

He noted that everyone is worried about the social consequences of the pandemic and that many want to return to “normality and take up economic activities again.” However, the pontiff warned that this “normality” should contribute to social injustice and environmental damage.

“THE PANDEMIC IS A CRISIS, AND WE DON’T COME OUT OF A CRISIS UNCHANGED,” HE SAID. “EITHER WE LEAVE BETTER OR WE LEAVE WORSE.”

Pope Francis declared that we should leave better, bettering social justice and the condition of the environment. “Today we have an opportunity to build something different,”  he said. The Director of the World Health Organization (WHO) publicly echoed the pontiff’s hopes that the world’s poor are inoculated against the virus. READ MORE

Pilots speak out about vaccine-induced injuries and deaths