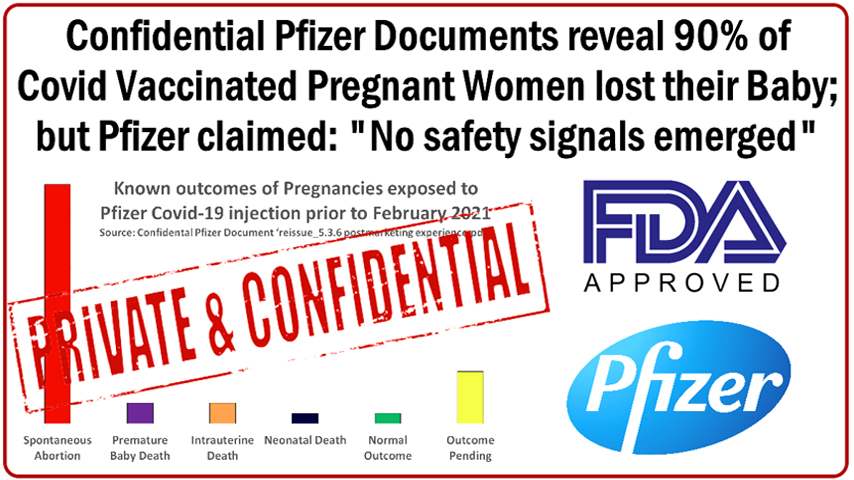 The confidential Pfizer documents that the FDA have been forced to publish by court order reveal that 82% to 97% of women who were mistakenly exposed to the mRNA Covid-19 injection either suffered a miscarriage or suffered having to witness the death of their newborn child upon giving birth.

But Pfizer claimed – “There were no safety signals that emerged from the review of these cases of use in pregnancy”.

The US Food and Drug Administration (FDA) attempted to delay the release of Pfizer’s COVID-19 vaccine safety data for 75 years despite approving the injection after only 108 days of a safety review on December 11th, 2020.

But in early January 2022, Federal Judge Mark Pittman ordered them to release 55,000 pages per month. They released 12,000 pages by the end of January.

Since then, PHMPT has posted all of the documents on its website. The latest drop happened on May 2nd 2022.

One of the documents contained in the data dump is ‘reissue_5.3.6 postmarketing experience.pdf’. Page 12 of the confidential document contains data on the use of the Pfizer Covid-19 injection in pregnancy and lactation.

Pfizer state in the document that by 28th February 2021 there were 270 known cases of exposure to the mRNA injection during pregnancy.

One-hundred-and-forty-six of those mother cases did not immediately report the immediate occurrence of any clinical adverse event. But 124 of the 270 mother cases did. Meaning 46% of the mothers exposed to the Pfizer Covid-19 injection suffered an adverse reaction.

A total of 4 serious foetus/baby cases were reported due to exposure to the Pfizer injection. The 4 serious cases involved the following events –

But here’s where things get rather concerning. Pfizer state that of the 270 pregnancies they have absolutely no idea what happened in 238 of them.

But here are the known outcomes of the remaining pregnancies –

There were 34 outcomes altogether at the time of the report, but 5 of them were still pending. Pfizer note that only 1 of the 29 known outcomes were normal, whilst 28 of the 29 outcomes resulted in the loss/death of the baby. This equates to 97% of all known outcomes of Covid-19 vaccination during pregnancy resulting in the loss of the child.

When we include the 5 cases where the outcome was still pending it equates to 82% of all outcomes of Covid-19 vaccination during pregnancy resulting in the loss of the child. This equates to an average of around 90% between the 82% and 97% figure.

That 82% figure is, however, very interesting when we consider the outcome of another study conducted by the Centers for Disease Controls V-Safe COVID-19 Pregnancy Registry Team. A study that was used to justify not just offering, but harassing pregnant women to get the Covid-19 injection in the UK.

We exclusively revealed in July 2021 how data had been manipulated by scientists carrying out a real-world study for the CDC to show that Covid-19 vaccines were safe for use during pregnancy.

However, our analysis proved that these numbers were extremely misleading due to the fact that of the 827 completed pregnancies, 700 / 86% of the women had received a dose of either the Pfizer or Moderna Covid-19 vaccine during the third trimester of pregnancy, meaning it was impossible for them to suffer a miscarriage due to the fact they can only occur prior to week 20 of pregnancy.

This meant that just 127 women received either the Pfizer or Moderna Covid-19 vaccine during the first/second trimester, with 104 of the woman sadly losing their babies.

Therefore the rate of incidence of miscarriage was 82%, not 12.6% as presented in the findings of the study, and the authors of the study have since admitted that they made a mistake, issuing a correction six months too late because the study has been used to justify Covid-19 vaccination of pregnant women and new mothers around the world.

But there’s that 82% number again. So that’s two sets of data, Pfizer’s confidential data, and the CDC’s manipulated study that show the rate of pregnancy loss following Covid-19 vaccination to be 82%. Just a coincidence?

Highly unlikely when we consider what else Medicine Regulators and Pfizer tried to cover up.

A ‘Freedom of Information’ request alongside an in-depth dive into the only pregnancy/fertility study performed on the Pfizer Covid-19 injection reveals that Pfizer and Medicine Regulators hid the dangers of Covid-19 Vaccination during Pregnancy because the study found it increases the risk of birth defects and infertility.

You can read the full investigation here, but here’s a snippet of what should have been included in official public documents, and subsequently wasn’t –

The FDA’S decision not to act on Pfizer’s data, and the cover-up of the animal study findings by both Pfizer and Medicine Regulators around the world have led to 4,113 fetal deaths being reported in the USA alone as adverse reactions to the Covid-19 injections as of 22nd April 2022.

And take a look at this data coming out of Scotland –

Public Health Scotland (PHS) has a full dashboard on Covid-19 wider impacts on the health care system, found here, and it includes a whole range of data from mental health statistics to pregnancies, cardiovascular disorders data, and cancer.

Official figures reveal that the rate of neonatal deaths increased to 4.6 per 1000 live births in March 2022, a 119% increase in the expected rate of deaths. This means the neonatal mortality rate breached an upper warning threshold known as the ‘control limit’ for the second time in at least four years.

The last time it breached was in September 2021, when neonatal deaths per 1000 live births climbed to 5.1. Although the rate fluctuates month to month, the figure for both September 2021 and March 2022 is on a par with levels that were last typically seen in the late 1980s.

Public Health Scotland (PHS) has not formally announced they have launched an investigation, but this is what they are supposed to do when the upper warning threshold is reached, and they did so back in 2021.

At the time, PHS said the fact that the upper control limit has been exceeded “indicates there is a higher likelihood that there are factors beyond random variation that may have contributed to the number of deaths that occurred”. You can read more here.

We either have a serious issue here or a bucket load of terrible coincidences, and it’s all arisen thanks to this unbelievable claim made by Pfizer in their confidential documents in response to 82% to 97% of women mistakenly exposed to the Covid-19 injection during pregnancy losing their child –

“There were no safety signals that emerged from the review of these cases of use in pregnancy and while breast feeding.”

See for yourself on pages 12 and 13 of the confidential document found here.

How Do You Cull 7 Billion People?—Convince Them To Beg For The Poison That Kills Them?