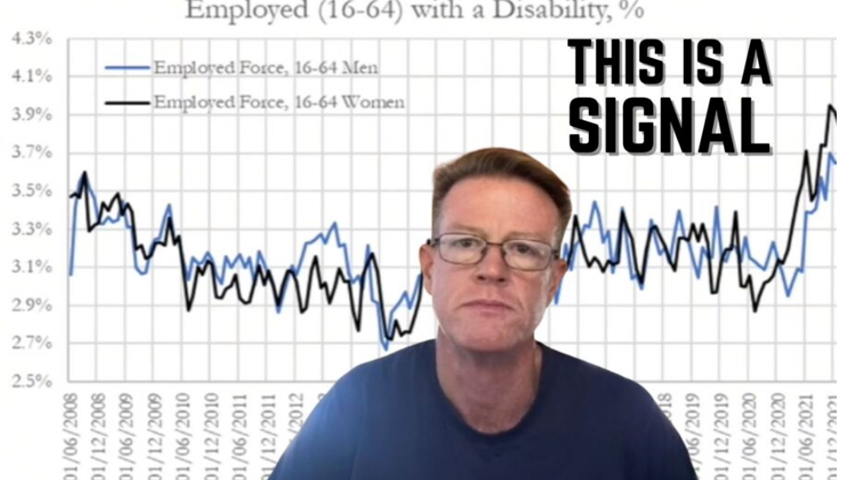 “Employed people are getting disabled at a faster rate than the general U.S. population.”

How many people have been disabled by the shots? Well, according to VAERS (as of September 9), there have been 14,833 U.S. reports of permanent disabilities after taking the jab. That’s quite a few, and each one is a tragedy, but I’m afraid that’s just a tiny fraction of the actual number. Remember, there’s a significant underreporting factor in VAERS. So let’s turn to another source, the U.S. Bureau of Labor Statistics.

This is a database, updated in real-time, and what it shows is over a 10% increase in disability claims from 2020 up until now, increasing from about 29 million Americans to a peak of just under 33 million.

That accounts for much more than 14,833 entries in VAERS…

Thankfully, we have Ed Dowd, who joined Steve Bannon on the War Room, to break down who precisely is being affected by this sudden rise in disability. There are quite a few charts, so let’s go through them.

This is the Civilian Labor Force data. These are Americans who are available to work and/or are working, so this group comprises about 161 million people. As you can see, the rate of change stayed fairly consistent, and then in 2021, it shot up three standard deviations.

“This is Wall Street talk, but that’s a signal,” said Dowd. Three standard deviation events are extremely rare and only happen a tiny fraction of a percentage of the time.

“When three standard deviation events happened on Wall Street, that’s a signal. If this was a stock, I’d be, I’d be doing work on the stock to see what’s going on here to see if this trend would continue. So this is a trend change.”

Let’s move on to the general population disability percentage. That’s a 6.6% rise in the disability rate for the total U.S. population.

Now, here’s where it starts getting interesting.

Employed people with disabilities. These are people who are willing to work and working. “So curiously enough, employed people are getting disabled at a faster rate than the general U.S. population. And that’s about 100 million people.”

“And this is even more stark.” So the disability data shows that while overall it was only a 6.6% increase [in the general population], in the employed population, it went off the charts, and it was a major second derivative rate of change increase for this group.”

And what’s the key variable that differentiates employed people from the general population over the past year and a half? VACCINE MANDATES!

This leads us to the only logical conclusion: these jabs, on a clear and convincing basis, are primarily responsible for this sudden spike in disability.

And it’s not just disability but also death.